During the hour and change of oral arguments on Prop 8 today, opponents of gay marriage continued pushing their seemingly absurd argument that same-sex couples hurt “the state’s interest and society’s interest in what we have framed as ‘responsible procreation.’” Justice Stephen Breyer, using common sense, pointed out, “There are lots of people who get married who can’t have children,” like inmates, old people, and the infertile, leading to one of the more entertaining tangents of the day. There was even some legitimate laughter!

While listening to pro–Prop 8 attorney Charles Cooper squirm is fun, the real zingers come from Justice Antonin Scalia, who said, “I suppose we could have a questionnaire at the marriage desk asking, ‘Are you fertile?’” and went on to quip about Senator Strom Thurmond, who fathered multiple children between ages 68 and 73. Here’s audio of the exchange: 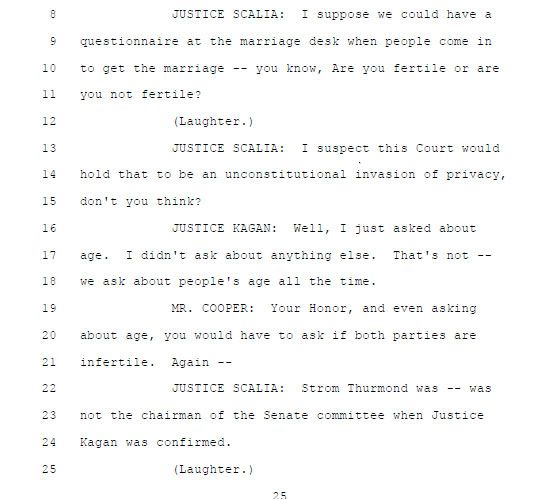