Being the pope carries many benefits: You’re Christ’s representative on Earth, leading a religion of 2.3 billion Roman Catholics around the world and getting driven around in a tricked-out Mercedes-Benz Popemobile.

But it also means becoming the head of a sprawling financial empire. The new pope, who is being elected at a conclave that began today, will not only take control of one of the world’s major religions; he will also oversee a massive religious business whose holdings are worth billions of dollars, but whose finances on a yearly basis are often rocky.

The finances of the Roman Catholic Church are decentralized and hard to value. Individual dioceses keep their own books and behave as independent corporations overseeing the finances of the parishes they represent. And the Vatican itself has been notoriously secretive about its vast financial holdings, which include real estate, priceless works of art, and a full-fledged media conglomerate.

In 1981, partly to quiet suspicions that the Vatican was hiding extreme sources of wealth, Pope John Paul II began releasing annual financial reports. The reports, which are helpfully translated into English by the Holy See’s press office (see the most recent example here), outline in broad terms the financial states of both the Holy See, which is the religious part of the pope’s empire, and the Governorate of Vatican City State, which handles all the governmental functions.

These reports aren’t as complete as the ones you would get from a publicly traded company — they list only net revenues and expenditures, and don’t offer line-by-line details of why, exactly, the Vatican’s deficit or surplus rose or fell in a given year. Nor do they list or attempt to value any of the Vatican’s extensive real-estate or art holdings. Still, for those of us who have wondered about how far the pope’s economic reach extends, they provide a welcome glimpse into the Church’s coffers.

The Vatican City government, on the other hand, had a surplus of 6.7 million euros in 2007, but swung to deficits in 2008 and 2009. Its main explanation for the deficits was the “notable economic and financial burden of protecting, evaluating and restoring the artistic heritage of the Holy See,” as well as a decline in visitors to the Vatican Museum caused by a tourism drop-off after the global financial crisis. Since the crisis, though, traffic to the museum and overall revenue has rebounded, leading to government surpluses of 20 million euros or more in each of 2010 and 2011.

The Vatican’s overall finances have long been problematic. As a 1987 Fortune investigation detailed, personnel costs and pensions are a major cost headache of both the Holy See and the Vatican City government. The Vatican also has a radio station and a newspaper, both of which have traditionally lost money (just like their secular counterparts!). Then there is the travel: When the pope tours the world, an entourage follows him, and all of that must be paid for, along with stadium rentals, security squads, and translators.

The Vatican does have its own mini-hedge-fund — called the Administration of the Patrimony of the Holy See — but the organization, which manages the Vatican’s stock and real-estate holdings, typically favors an ultraconservative, low-risk investing strategy, meaning that it misses out on some market rallies. In addition, the Vatican’s heavy real-estate exposure means that the book value of its holdings can fluctuate dramatically with the broader market.

There is another interesting figure in the Holy See’s financial reports: the amounts of money donated to Peter’s Pence, the pope’s personal collection fund made up of donations from Catholics all over the world. (According to the financial reports, Peter’s Pence is best thought of as “the fund which goes to the Holy Father’s works of evangelical solidarity.”) This fund is used to cover budget shortfalls when they arise, and to carry out other kinds of capital projects in and around the Vatican. 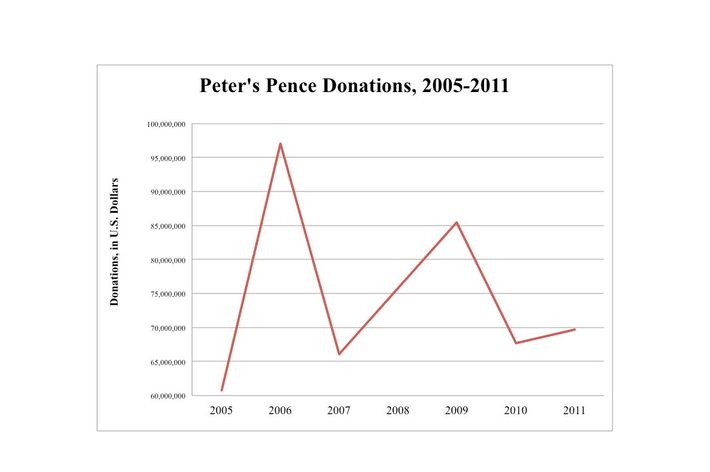 Of course, these are small numbers compared to the overall size of the Vatican’s financial empire. In 2004, the AP estimated that the Holy See’s real estate, excluding St. Peter’s Basilica and the Sistine Chapel, was worth nearly a billion dollars. Then there is the untold quantity of priceless artwork, including world-famous works by Michelangelo and Raphael. The Vatican doesn’t even try to apply a fair-market value to its art collection — the price used to be listed on the church’s books as 1 lira — but it’s safe to say that if sold, even a fraction of the works could likely fetch billions more.

The new pope, whoever he may be, could solve all of the Vatican’s cash-flow problems for years by unlocking some of that value. But since the Vatican frowns on the idea of selling its art (“They belong to humanity,” a Vatican budget official told Fortune of the artworks in 1987), it’s highly unlikely he would ever choose to do so.

The more likely scenario is that, once elected, the new pope will continue to preside over a volatile and diversified business empire whose fortunes rise and fall with the greater economy, just like his predecessors did. Which means that in addition to putting out papal encyclicals, the new pope might want to learn the ways of the market, too.