There is a thing out there called a “bitcoin.” Maybe you’ve read about it somewhere — in this Bloomberg Businessweek piece, or on TechCrunch, or perhaps even in one of Paul Krugman’s blog posts. It’s a virtual, peer-to-peer currency that aims to replace the government-issued money in your wallet with something more secure and untraceable. And although it’s been around since 2009, it’s been getting a lot of publicity in recent weeks, thanks to a popularity milestone (the value of all Bitcoins in circulation crossed the $1 billion mark) and the scary situation in Cyprus.

Usually, a wave of publicity is a good thing. But for Bitcoin, a sudden spike in demand and attention may be endangering its future.

First, if you’re just catching up: Bitcoins are a virtual currency. They’re highly secured, totally unregulated, and anonymous, which makes them attractive to hackers and anarchists who don’t like the fact that money is issued and controlled by governments, and who want a form of currency that is completely divorced from any and all central planning and interference. When first introduced, they were mainly used to buy drugs, but are now in slightly wider use. (For example, OKCupid is reportedly considering allowing bitcoin purchases for premium memberships.)

As more stories are written about bitcoins and more retailers agree to accept them, the value of each bitcoin has been soaring. As this chart shows, the price of a bitcoin has gone from under $40 to more than $100 in March alone. 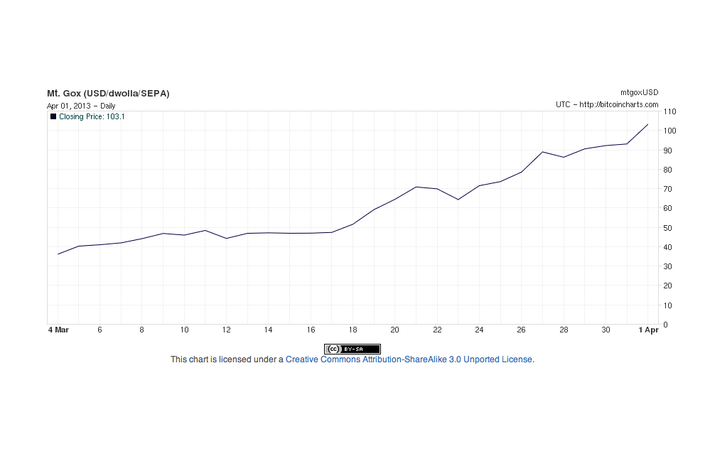 A huge rise in values seems good, if you’re used to looking at stock charts. But for a virtual currency that has no mechanism for adjusting supply relative to demand, it can be a kiss of death. As Joe Weisenthal points out, bitcoins are now undergoing massive hyperdeflation. People are hoarding bitcoins rather than spending them on stuff. Which makes sense. If you think your bitcoins will be worth twice as much next month as they are now, why would you spend them on online-dating services?

Zach Seward, who has been chronicling the Bitcoin bonanza over at Quartz, observes that while the rise in value last month was great for speculators, it was less good for true bitcoin believers who want to see it catch on as a legitimate alternative currency. He writes:

As bitcoin’s value rises, so does interest in it, which drives the price up even further, leading people who own bitcoins to expect even more gain, making them reluctant to sell, reducing the available supply of bitcoins, driving the price still higher, leading to more interest…

Bitcoin enthusiasts seem to have settled most of the network’s technical challenges. Unlike their early hacker-experiment days, bitcoins are now fairly easy for normal people to get, and the number of real retailers who are accepting them is growing steadily. You can now use bitcoins to buy TVs, alpaca socks, and e-cigarettes, among other things. In certain sectors of the economy, it’s not hard to see how bitcoins could eventually stand alongside dollars as a legitimate form of money.

But unless bitcoin prices stabilize, it’s never going to happen. Real people don’t want their money to double in value in a month – even if that change works in their immediate favor. Fiat currency is based on trust, and spenders want to feel relatively certain that what is worth $1 today will be worth something close to $1 tomorrow.

Bitcoins haven’t worked like that. In fact, as this research note indicates, lots of people think the bitcoin bubble is going to end badly. And since there’s no planning authority who could help deflate bitcoin prices and bring them down to more stable levels before a bubble pops, the only real long-term options are either for bitcoin to keep getting publicity (and therefore demand, high prices, and hoarding), or for interest to tail off on its own, prices to fall, and people to become willing to spend their bitcoins again.

For their own sakes, maybe bitcoin enthusiasts should be hoping for more sanity on their exchanges, and fewer magazine stories and blog posts.