George F. Will, in the midst of a discursive, Larry-King-style-if-Larry-King-were-a-Tea-Partier Sunday column that rambles through such topics as Richard Cordray, sequestration, Obamacare, gun control, a new chairman of the Senate Finance Committee, the Internet sales tax, and the failure of one electric car firm, uses the last occasion to share his favorite statistic: There has been no global warming for fifteen years!

Will has been making this point enthusiastically for four years now. It has appeared in such columns as “Dark Green Doomsayers,” “Climate Change’s Dim Bulbs,” “Climate Fixers’ Hard Sell,” “Cooling Down the Cassandras,” “Climate Science Tantrums,” among others.

The original, circa-2009 version of this talking point was that “there has been no recorded global warming for more than a decade.” What Will meant by this was not exactly what you might think. He meant that the hottest year on record was 1998, and no year has exceeded that one, and so there has been no global warming.

Recently, Will has subtly altered his formulation, the most recent version of which is “global warming, of which there has been essentially none for 15 years.” That “essentially” has been added because 2010 was clearly hotter than 1998.

In any case, even if that weren’t true, and 1998 were still the hottest year on record, would Will be correct in asserting there has been no global warming for fifteen years? No, of course not. 1998 was a freakishly hot year due to El Niño. But there’s just a basic concept in statistics called a trend. Here’s the trend in global temperature, per NASA: 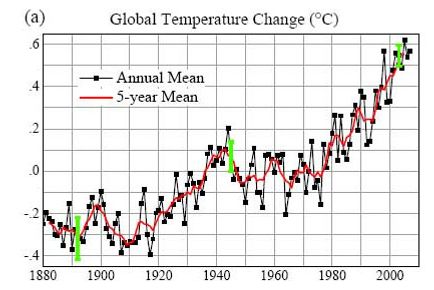 Any remotely honest person would look at that data and recognize that the trend has been rising. Now, it’s true that it hasn’t risen in a completely straight line, because that’s not how most data works. Will’s old method was to pluck that spike you see in 1998 and make that a starting point, insisting there’s been no climate change. For this claim to make sense, you’d have to believe that the world experienced a huge, sudden, and permanent spike in temperature in 1998, and hasn’t changed since. Of course, since Will’s favorite meaningless fact stopped being true, he’s just started inserting weasel words that allow him to pretend his unimportant-if-it-were-true fact is still true.

Will’s enthusiastic disdain for climate science, which appears to date back to his enthusiastic 2004 reading of Michael Crichton’s State of Fear, a really weird anti-climate science polemical novel, tells us a lot about the state of conservative movement thought. You can find examples of non-conservatives embracing fringe anti-scientific beliefs, like vaccine rejection, but you don’t find this happening among prestigious, mainstream liberal intellectuals.

George Will is as intellectually prestigious a conservative thinker as you’ll find. Before David Brooks came along, he was the conservative liberals liked to cite when they wanted to hold up a conservatives they could respect. And he’s crazy as a loon!