Yesterday, I did something entirely irrational – something both my common sense and my work as a business writer should have prevented me from even considering. I decided to buy a Bitcoin.

If you’re just catching up, Bitcoins are a virtual currency that is, right now, experiencing a flash of instant celebrity. Bitcoins have been around since 2009, but recently, they’ve become the financial media’s favorite obsession. The price of a single Bitcoin has gone on an insane tear, from $34 to $140 in the span of month. Wall Street analysts are getting questions from their clients about Bitcoins, Bitcoin ATMs are being put up around the world, and the value of all Bitcoins in circulation now stands at $1.6 billion. That’s not a tremendously large number for a global currency (the value of all U.S. dollars in circulation is roughly $1.1 trillion). But for a so-called “crypto-currency,” it’s pretty impressive.

A Bitcoin is a unit of virtual, encrypted currency. Right now, a single Bitcoin unit (abbreviated as BTC) is worth about $140, but that value has fluctuated wildly. A Bitcoin functions like a normal currency, with a few exceptions: First, Bitcoins aren’t issued by a government or a central bank. They’re produced by a complex computer processing scheme called “mining.” You’d need a Ph.D. in computer science to understand exactly how Bitcoin mining works, but basically, it uses distributed computing power and complex math formulas to “find” a certain number of Bitcoins every day. Once I mine a Bitcoin, or buy a Bitcoin from someone else, it’s held in my virtual “wallet.” When I want to use it to pay for something, I simply type in the recipient’s address — a randomized string of between 27 and 34 letters and numbers — and off it goes. The entire process is anonymous and untraceable, which is part of the appeal. (There’s more in this FAQ and this Businessweek story, if you’re interested.)

Several friends warned me about buying a Bitcoin now, since prices are at an all-time high, and most smart people are predicting that the bubble will pop eventually. But many people expect the price of Bitcoins to go higher than $140. Henry Blodget half-jokingly suggested that Bitcoins could reach $400, and there’s no logical reason why they can’t keep rising beyond that. The more publicity Bitcoins get, the more demand there is. And since supply is limited by design, and no central authority can step in and “print” more Bitcoins, it’s theoretically possible that the price could keep rising for a while before a bubble burst happens.

So I decided to jump on the bandwagon and buy a Bitcoin. A single Bitcoin. Partly, I wanted it for novelty value. Partly, I thought it might make me a few easy dollars. And partly, I wanted to see how easy it is for a lay person — who has no coding or hacking experience, and who has never dealt with a virtual currency in his life — to get involved.

How to Buy a Bitcoin

The first thing to know about buying a Bitcoin is that you can’t just whip out your credit card. Because Bitcoin transactions are completely anonymous, none of the big exchanges accept credit cards, owing to the risk of fraudulent chargebacks.

The most popular method of paying for Bitcoins is to give your bank account information to an exchange and transfer money into a Bitcoin account. I was uneasy about giving up my bank information to a sketchy currency dealer, and given that my goal was only to buy a single Bitcoin, I nixed that idea off the bat.

Option No. 2 is a bit convoluted, but allows you to pay for a Bitcoin in cash. Basically, you use a cash-payments service like Moneygram to pay an intermediary at a designated deposit spot. The intermediary then takes the cash, converts it to credit, and deposits the credit into a Bitcoin exchange account for you.

The insanely fast scaling of the Bitcoin economy has led to some technical glitches with big Bitcoin sites. The largest Bitcoin exchange, Mt. Gox, is only taking new memberships by application owing to high demand, and my application stayed un-approved for three days before I decided to go with a smaller exchange. I picked Bitstamp, which had a nice, beginner-friendly interface, and which — seemed to be able to get Bitcoin transactions processed. (Some other Bitcoin sites, weighed down by too many people trying to buy, are either shut down completely or processing only select transactions.)

To deposit money into a Bitstamp account, I had a few options: I could hand over my bank information (nope!), I could use another virtual currency system called Ripple to convert dollars into BTC (too complicated), or I could use a service called BitInstant.

BitInstant is a Brooklyn-based payments processor used specifically for Bitcoins. The way it works is: You tell BitInstant how much you want to deposit in a Bitcoin exchange account, which exchange (Bitstamp, Mt. Gox, etc.) you want it to go to, and your account number. You go to a “cash deposit location” (in my case, a CVS several miles from my house) and use Moneygram to pay a cash-payments service like ZipZap, which then pays BitInstant, which then credits your Bitcoin account. If it sounds complicated, it’s because it is.

I set up my BitInstant payment in a window that looked like this: 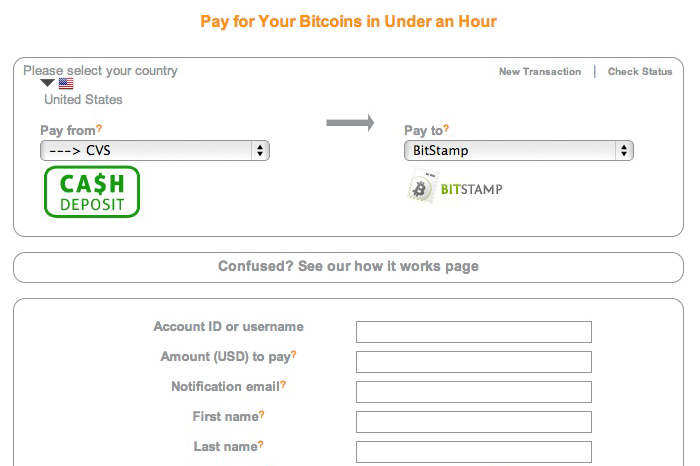 I decided to deposit $130 (enough to buy one Bitcoin, as of yesterday — today, it buys about .95 BTC). And, after giving my Bitstamp account ID and some other personal details, BitInstant spit out a PDF document that I was supposed to bring to my local CVS. BitInstant takes a 3.99 percent fee, and ZipZap (the cash-payments intermediary) tacks on another $3.95, which means that for my $130 in cash, I would get roughly $124.81 in Bitcoin-exchange money.

Here’s the quote I got (I’ve modified the Quote ID and Event ID to preserve the transaction’s anonymity): 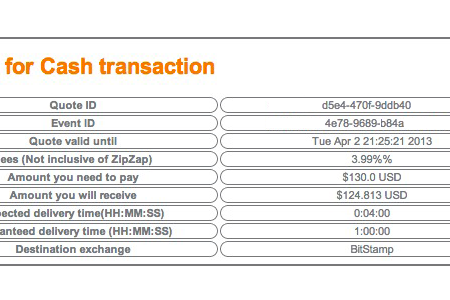 After printing out the PDF, I went to my local CVS, and, as instructed, found the Moneygram money transfer station. It’s a red phone, right by the cash register. 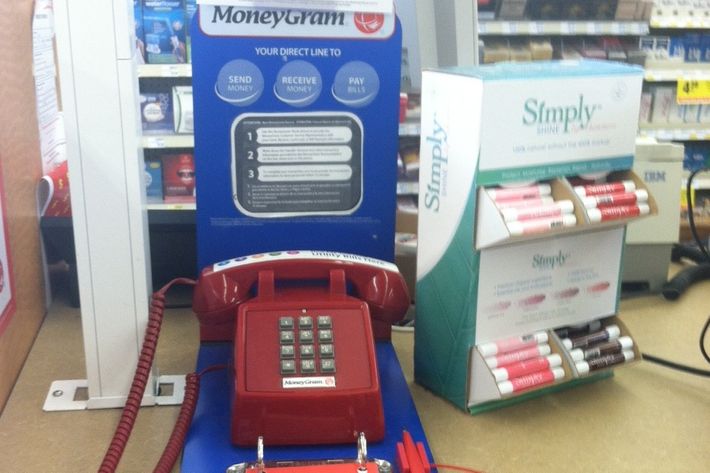 I picked up the red phone and was connected with a Moneygram representative. She asked for some basic information about whom I was trying to pay (ZipZap) and how much I was trying to pay them ($133.95). I gave her the information BitInstant had given me, and she confirmed my transfer. Now the only remaining step was to give the CVS cashier $133.95, as if I were buying a really expensive pack of razors. 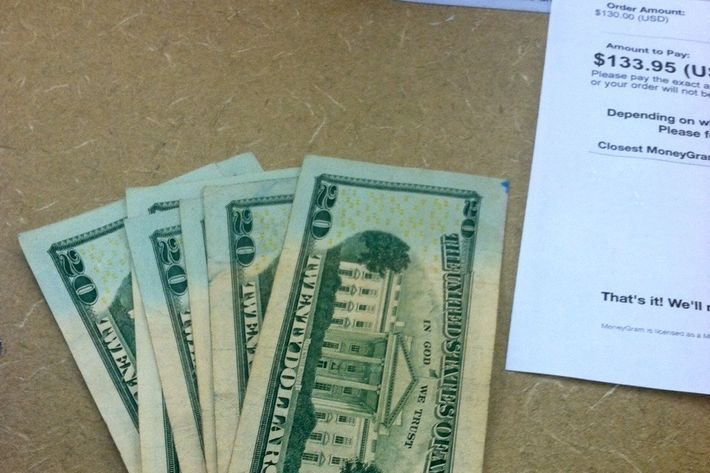 And received my change from the cashier, along with a receipt for the payment: 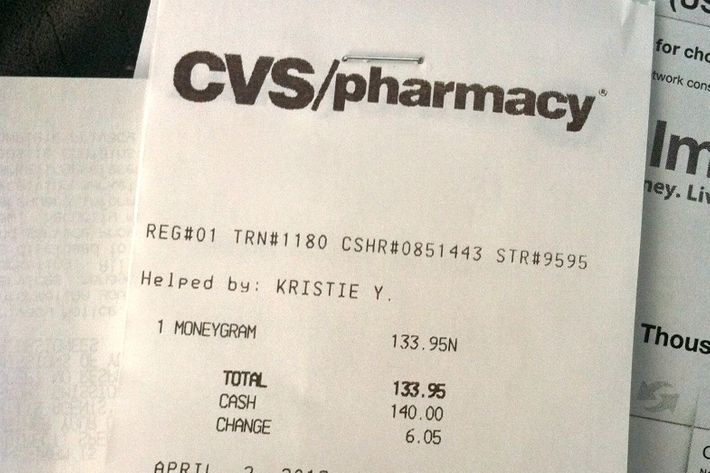 Almost instantly, I got two confirmation e-mails — one from ZipZap, saying that my payment had gone through, and another from BitInstant. The one from BitInstant was a bit more worrisome, since although it confirmed that I had made a “transfer to Bitstamp,” and included a confirmation number and “order executed,” it also included this cryptic error message:

I spent the rest of yesterday wondering if I’d been scammed. Both BitInstant and Bitstamp appear to be legitimate businesses, judging from various magazine profiles and funding announcements. But just last month, after it was hit by a hacker, BitInstant’s CEO, Charlie Shrem, claimed in a blog post that the company had made its processing system “stronger and more robust than ever.” Shouldn’t my Bitcoin have arrived by now?

My issue points to a larger problem for the Bitcoin economy. If Bitcoin wants to become a global currency used by the masses, CVS cash-drops won’t work. It needs simple, intuitive methods to convert major world currencies into BTC and back. It needs those methods to work reliably, even in times of severe demand spikes. All fiat currency is built on trust, and without a reliable infrastructure, it’s hard to see how Bitcoin can be trusted enough to become truly legitimate.

We’re seeing this in action today. Bitcoin’s largest exchange, Mt. Gox, went down for roughly an hour this morning, owing to what it called “high volume trading at the moment.” As Quartz noted, the glitch caused the price of Bitcoins to fall dramatically, and led to worries about a “deflationary spiral,” or a crash. Until major markets like Mt. Gox and Bitstamp can stabilize their operations, investing in Bitcoins is still a dangerous game.

I e-mailed Shrem this morning, asking about the status of my BitInstant transfer. Several hours later, he wrote back, apologizing for the delay, and telling me that he had personally confirmed my transaction.

I opened up Bitstamp, and there it was — my $124.81 account balance, waiting to be traded for Bitcoins. Yesterday, that amount would have bought a whole Bitcoin; today, when I made my bid around noon EST, it was only enough to get me about nine tenths of one.

Now I have to figure out how to spend my Bitcoin. I’ve been perusing a list of Bitcoin-accepting retailers. Maybe I’ll get a “Bacon Stormtrooper” T-shirt from 7-Buck Tees? Maybe a Bear Grylls Survival Pack from this survival-gear store?

Or maybe I’ll just play currency speculator and hold on to my Bitcoin for a while. It’s entirely possible I’ll lose all my money, or a good portion of it, when the bubble bursts. But if the past few days are any indication, it won’t be a boring thing to watch.

Are Bitcoins Too Popular for Their Own Good?
I Spent a Coin (and I Liked It) — How I Bought Lunch With Bitcoins