It seemed, for a while, like the New York Times’ Nicholas Kristof would be the winner of today’s inevitable Worst Politicization of a Deadly Tragedy contest after he tweeted this (since-deleted) critique of GOP obstructionism: 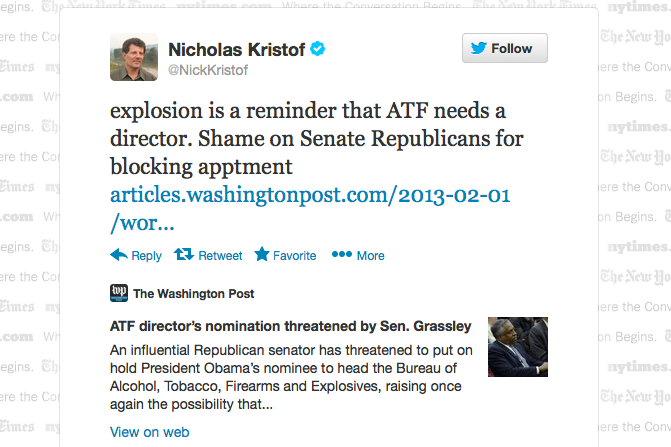 But Kristof has since deleted the tweet and apologized:

People jumping on me for criticizing Sen Repubs for blocking ATF appointments. ok, that was low blow. i take it back

All of the above! RT @d_hershberger: @nickkristof low blow? how about classless, or insensitive?

Soon after, though, the Washington Post’s Jennifer Rubin swooped in to fill the void, and then some:

Not writing on Boston. It is a local crime story for now.

It’s subtle, but Rubin appears to be making an allusion to a colleague of hers at the Washington Post, Sarah Kliff, who has said that she didn’t write about the Kermit Gosnell stoy because she covers policy, “not local crime.” So congratulations to Jennifer Rubin, who, against all odds, found a way to use what appears to be a deadly terror attack to make a point about abortion.

Update, 5:35 p.m.: In later tweets, Rubin gives a wholly different explanation for her “local crime” tweet. You be the judge.

@kredo0 to be clear, not writing until we know extent of and responsibility for in contrast to NY Post and claims attached to JFK

Update, 6:03 p.m.: The Wall Street Journal’s James Taranto tweeted out a partisan joke about President Obama, then deleted it minutes later and apologized.

Really?Really?!RT @jamestaranto Obama is going to make a statement. Boehner is going to have a moment of silence. Advantage GOP.

Critics of my last tweet have a point. Deleted.

THE FEED
13 mins ago
the national interest
the national interest
Ron DeSantis’s Florida Is Where Free Speech Goes to Die
By Jonathan Chait
The governor once again shows he’s far more illiberal than the “woke” left he vilifies.
8:00 a.m.
encounter
encounter
Can Nasty Nestor Turn Around the Yankees?
By Ross Barkan
The pitcher has become an unlikely star for the Yankees. He’s just happy to be here.
7:00 a.m.
crime and punishment
crime and punishment
The Death Penalty Case That Went Too Far
By Lara Bazelon
Oklahoma is set to kill Richard Glossip, but he’s almost certainly innocent. Even Republicans there are in revolt.