The dead rising from the grave. Dogs and cats living together. New Yorkers showing love for Boston. A day ago, all of these things would have been sure signs of the apocalypse. But since the terrorist attack at the Boston Marathon yesterday, New Yorkers — even diehard Yankee fans! — have found themselves in the alien position of rooting for Beantown.

A sign of support was in lights on the wall of the Brooklyn Academy of Music last night, courtesy of the Illuminator, “a political art project that emerged out of Occupy Wall Street.”

It’s in the pages of the Daily News today, where cartoonist Bill Bramhall drew a Yankee and a Red Sock in a somber embrace:

It’s on Facebook, where an illustration of Yankee-Sox solidarity has been shared thousands of times: 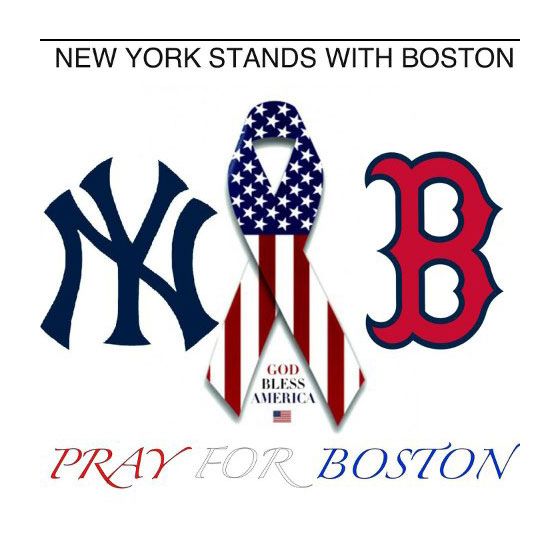 i hate Boston. but in times like these we must love one another. outside of sports.#NYLOVESBOSTON

Born and raised in NY & a diehard @yankees; however today my heart and prayers are in and with the people of Boston #BOSTONBEATSON #WEREWTU

From a true Yankee fan, Stay strong Boston, A great city with great strong people. With ya all the way truly Heart felt! #boston #nyc

I usually hate Boston because I'm a New Yorker but today my prayers go out to them. Hopefully everyone thats injury are ok. #PrayForBoston

Being a Yankee fan usually means you Hate Boston. But not today. Today we come together and pray for all those affected by the events today.

@15lasershow As a Yankee fan. I spent my life rooting against Boston. Today we all are Bostonians.give em sumthin to cheer for #15 #gosox

Even Yankee fans feel for Boston today, we now share a common pain. Pinstripes weep for you today #staystrong

All us NY Yankee fans are pouring our love out to Boston. You can count on it. @yankees

@middlebrooks I am a huge #yankeesfan but you better believe I will be pulling for you guys for the sake of Boston.#prayforboston

And it’s walking around in the form of Nikki Bizzoco’s 2-year-old son, Dylan James.

My little Yankees fan is sending all of his love to Boston today. #prayforboston #staystrongboston… instagram.com/p/YKqyJUoIGZ/

“My sister-in-law lives in Boston and we have been trading Yankees-Red Sox gag gifts for years,” Bizzoco, a Yankee fan living in New Jersey, explains over e-mail. “Since my son was born, she has sent him a Red Sox item for every special occasion, even though she knows I typically will never dress him in them, to continue the tradition. So he has a closet full of Red Sox gear, and today, for the first time, it felt right to let him wear some of it in support of his aunt, her partner (a marathon runner), and their beloved city.” 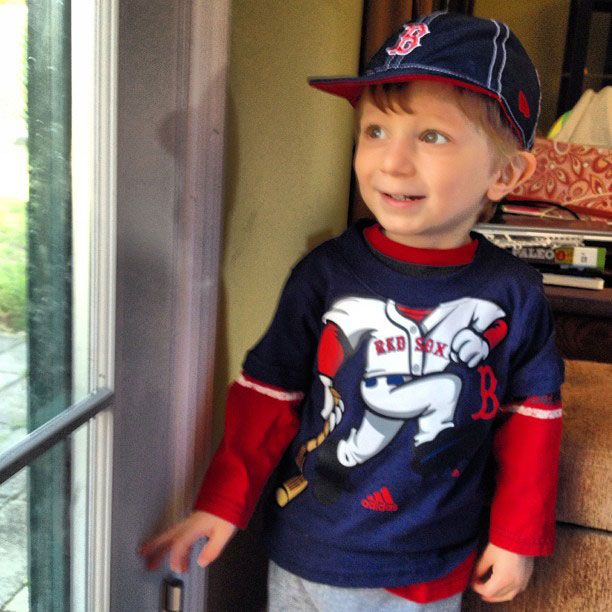 Someday — perhaps as soon as the start of the Knicks-Celtics first round playoff series this weekend! — New Yorkers and Bostonians will despise each other again for reasons that are not particularly rational. But for now, at least, everyone seems to understand how little the rivalry bullshit really matters.

Update, 12:47 p.m.: The flag of Boston is flying outside of New York’s City Hall today:

Update 3:34 p.m.: Boston will be honored at Yankee Stadium tonight with a rendition of “Sweet Caroline,” which has been played at Fenway during every Red Sox home game for over a decade.

Our thoughts are with the Boston community. Tonight there will be a special moment of silence & Fenway favorite Sweet Caroline @ end of 3rd.

.@yankees Thank you! We appreciate your support.

+Comments Leave a Comment
New York Is Rooting for Boston, for Now