Every few days, I open my e-mail in-box to find a note from a woman named Kate (Bruns) Bernard. I’ve never met Kate (Bruns) Bernard, but she sure sends me a lot of e-mail. More than any other actual human in my in-box, I’d guess, with the possible exception of my mother.

Kate (Bruns) Bernard e-mails me a lot not because she’s nice (though she may well be!), but because she works for Hamilton Place Strategies, a D.C.-based “policy and communications consulting firm” that works on behalf of big financial institutions and Wall Street trade organizations like the Financial Services Forum. Recently, her firm has been very busy trying to defend big banks against a bill introduced by Senators Sherrod Brown and David Vitter that would make it harder for them to do business. And so, every time someone of note goes on TV, writes an op-ed, or conducts a study that purports to show how great big banks are, and how little reforming they need, it’s her job to send it to me.

The Brown-Vitter bill is only a week old, but it’s already getting the kind of scorn that Wall Street typically reserves for Senator Elizabeth Warren. It’s a bill that would impose tough capital requirements on U.S. banks, requiring them to hold bigger cushions against losses and lessening the likelihood that they could undergo a 2008-style collapse. Banks with more than $500 billion in assets would be required to have a 15 percent equity cushion, and other banks would need 10 percent.

Matt Levine did some back-of-the-envelope math when the draft bill was leaked that estimated Brown-Vitter’s 15 percent capital requirements would force the six biggest banks to cough up an additional $1.2 trillion in capital all at once. But that’s not actually what would happen in a Brown-Vitter world. The more realistic scenario, as Peter Eavis explained, is that banks would voluntarily shrink themselves below the $500 billion mark by spinning off assets and divisions, so they’d only need 10 percent equity after all. These smaller banks could still make a lot of money! They’d just make less of it — a possibility big banks don’t especially enjoy thinking about. 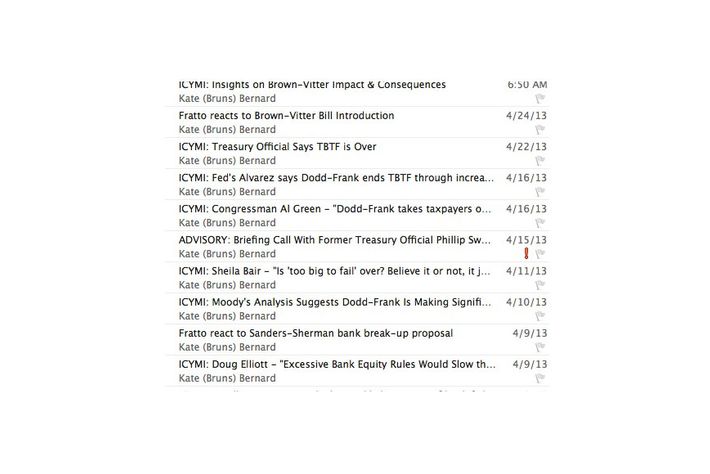 It’s been interesting to watch the efforts to beat back Brown-Vitter (and an associated break-up-the-banks bill proposed by Senator Bernie Sanders and Representative Brad Sherman) evolve over time. At first, the case the Wall Street lobby made was that the banks needed to be big — that without gigantic financial institutions, you wouldn’t have huge bridge loans and cross-selling and all kinds of other good stuff that clients demand. (Rob Nichols of the Financial Services Forum: “An economy of the size, complexity and diversity of ours needs financial institutions of all sizes, business models and market strategies.”)

Then the banks decided that arguing over their usefulness probably wasn’t going to play well, politically. So out went that talking point and in came the assertion that the banking system was perfectly safe and that the too-big-to-fail problem had been solved. We’re all fine! No danger of collapse here! (“The banking system is arguably as strong as it has ever been,” said Moody’s economist Mark Zandi, in a February quote that was passed along by Kate (Bruns) Bernard.)

But that, too, was unconvincing, so the third talking point emerged. This one was seemingly at odds with the one before it — it argued that banks don’t need to be protected from failing by new regulations, because they can already fail just fine. (“In case you missed it, last Thursday evening, Treasury Undersecretary for Domestic Finance Mary Miller asserted that too-big-to-fail is over.”)

Of course, all of these talking points have been accompanied by a generic mishmash of fear-mongering that has stayed fairly consistent in its doom-and-gloom tone. (Brown-Vitter would break up the banks/cause a credit crunch/spark a massive recession/bring back smallpox.)

Brown-Vitter is probably not going to pass, even though, as Jesse Eisinger and Mark Whitehouse have pointed out, none of the arguments against it make much sense. It’s a bill that has some unimpeachably good parts in it but, on the whole, would be a mess to implement. (As Levine points out, it could have the unintended effect of causing banks to hold riskier assets on their balance sheets.) And, unlike the Dodd-Frank act passed in 2010 at the tail end of the financial crisis, Brown-Vitter doesn’t yet have broad Democratic support and the backing of President Obama.

Banks consider Brown-Vitter more of a threat than Dodd-Frank, because the newer bill would do them considerably worse damage, and its core capital requirements would be hard to water down over time. And if Brown-Vitter dies, it will be the doing of actual lobbyists, holding actual meetings with members of Congress. Kate (Bruns) Bernard is just one cog in a massive, industry-wide effort to make the bill look ridiculous before it begins to pick up steam.

But, paradoxically, the Wall Street lobby’s e-mail fear campaign – and its willingness to keep turning on a dime, strategy-wise – has made me take Brown-Vitter considerably more seriously. If big banks are wailing this hard over a proposed piece of legislation, and if their talking points against it are so predictably flimsy, the bill may have some teeth after all.

+Comments Leave a Comment
How Wall Street Is Fighting Brown-Vitter