The CBO’s new budget projections (PDF, warning: dense) are out, and the upshot is that despite the frenzied warnings of impending Armageddon by Erskine Bowles, Alan Simpson, and the rest of the deficit-hawk brigade, the federal budget is actually in better shape than we thought.

The CBO estimates that the federal deficit this year will ring in at $642 billion. That’s the smallest deficit since 2008, and about $200 billion less than previously projected, mostly owing to higher tax revenue, and bigger-than-expected payments to the Treasury department from Freddie Mac and Fannie Mae. Those are one-time developments and won’t affect the baseline much, but they’re a good surprise nonetheless.

It’s hard not to see the CBO’s projections as the latest in a long series of demoralizing developments for the Simpson-Bowles-led deficit scold movement. Overall, the CBO says that barring unforeseen policy changes, the deficit will shrink to 2.1 percent of GDP in 2015. That’s better than the 2.3 percent target Simpson and Bowles originally set out in their 2010 report. And it will happen even without the grand bargain they’ve so desperately sought.

Neither is the federal debt piling up to unsustainable levels. As the CBO’s chart shows, the debt-to-GDP ratio is now projected to peak in 2014 at 76.2 percent, before falling to 70.8 percent in 2018. That’s a long way from the now-discredited 90 percent threshold budget scolds have used to scare policymakers, and the projections —ombined with record-low interest rates and eerily calm bond markets — should put our concerns about an immediate debt crisis to rest. 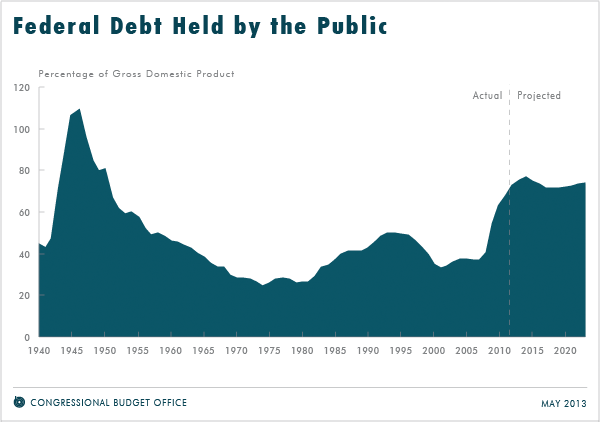 Fix the Debt, however, is unbowed, and told the Hill that “the rosier-than-expected near-term projections do not change the fact that rising health care costs, an aging population, Social Security’s looming insolvency, and ever-increasing interest payments will greatly expand the national debt as a share of the economy starting at the end of the current decade.”

It’s unclear whether Fix the Debt actually read the CBO’s report, since, in every budget area the group cites as a major, sky-is-falling threat, the report actually contained good news. Health-care spending, according to the CBO, “has grown much more slowly both nationally and for federal programs than it did historically and more slowly than CBO had projected.” Projected ten-year Social Security spending until 2023 was cut by $86 billion. Projected Medicare spending was cut by $85 billion. And the projected cost of interest payments was lowered by a combined $193 billion over the projection period.

And yet, with a report full of shrinking spending and falling deficits, deficit hawks are still singing the same apocalyptic tune. Maybe the fourth iteration of Simpson and Bowles’s report could include projected costs for looking a gift horse in the mouth.