Seven people were hurt this early Saturday morning near Rockview, Missouri after two freight trains collided, causing the collapse of a highway overpass. According to CBS affiliate KFVS, a Union Pacific train T-boned a Burlington Northern train that was passing through an intersection at around 2:30 a.m. The Union Pacific train derailed and ran into one of the nearby bridge’s support pillars, snapping the street into pieces. No one was on the overpass at the time, but two cars carrying a combined five people drove into the destroyed road because it was too dark to see what had happened. 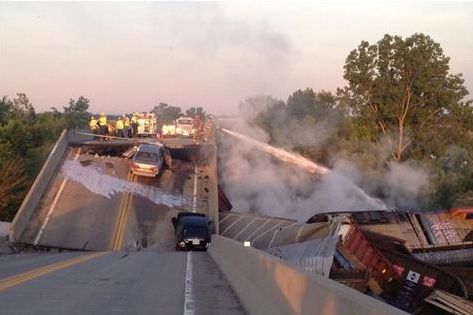 The drivers and passengers were taken to the hospital, as were the Union Pacific train’s conductor and locomotive engineer, who were pulled from the wreckage. (“One was kind of bloody; the other one looked like he was pretty shook up,” said a witness.) Somehow, six of the injured people have already been released, and the remaining one is reportedly in good condition. The accident occurred just a day after a truck crash lead to the collapse of an overpass near Seattle, and a week after dozens were injured after a Metro-North train derailed in Connecticut.

THE FEED
7 mins ago
creature capers
creature capers
The Hunt Is on to Find the Dallas Zoo Bandit
By Matt Stieb
Police are looking for whoever is responsible in a strange crime wave in which animals have been killed and apparently stolen from the zoo.
5:16 p.m.
the talented mr. santos
the talented mr. santos
Here’s Every Single Lie Told by George Santos
By Matt Stieb
Navigating the many exaggerations and falsehoods of New York’s newest representative.
3:56 p.m.
life after roe
life after roe
RNC Tells Republican Politicians to Stay Extreme on Abortion
By Ed Kilgore
The RNC passed a resolution scolding politicians who backed off after the end of Roe v. Wade and urging them to stay on the offensive in 2024.