Everything we know so far about the unfolding spy drama in Russia comes from the FSB — the Russian version of the FBI — so take it all in with the requisite skepticism, but here we go: According to the FSB, an American “diplomat” named Ryan Christopher Fogle was detained last night in Moscow while trying to recruit a Russian official as a CIA informant. He was wearing a wig and carrying lots of money, “special technical equipment,” and a letter of recruitment. After being questioned, he was returned to the U.S. embassy.

The United States hasn’t commented so far. On Twitter, U.S. ambassador Michael McFaul was tight-lipped, or tight-fingered, or whatever you call it when someone refuses to talk over Twitter:

On its face, there doesn’t seem to be anything that strange about this story. The Cold War is long over, but it’s no secret that the United States and Russia have continued their espionage games — often involving sexy but largely useless spies — unabated. But there is actually something pretty weird about this story. It’s the recruitment letter (translated here into English from its original Russian by news outlet RT): 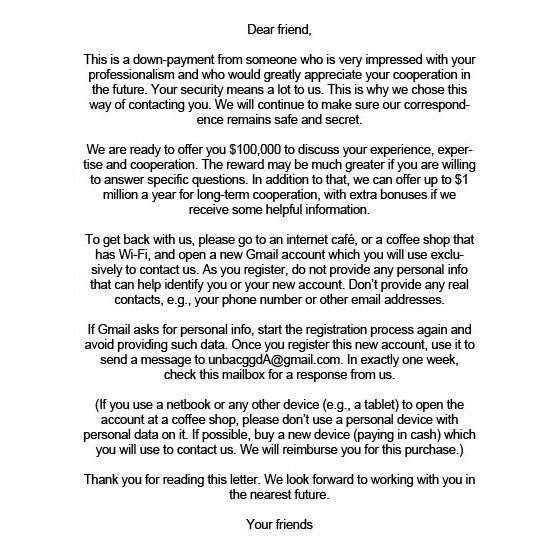 This is how the CIA recruits spies? With a form letter that reads like something you’d find in your in-box courtesy of a Nigerian prince?