The Supreme Court’s decision to strike down section 3 of the Defense of Marriage Act is, quite literally, what many gay couples have been waiting for. Without the federal benefits and protections afforded to straight partners, planning for forever was not only horribly inconvenient (see: Edith Windsor’s $363,000 estate-tax bill), but impossible. Chief among the perks that will now be afforded to all married people are equality in the face of the country’s immigration laws, like the ability to sponsor a foreign-born spouse for a green card, and an array of financial benefits that will directly affect the way couples spend and save.

Although the government is still working out the specifics, those waiting on the DOMA decision like their lives depended on it are eager to get going — re-filing taxes, proposing marriage, and tending to things that might not have mattered with deportation looming. It’s all different now.

“The decision has caused a flurry, to say the least, of phone calls,” said Jay Waxenberg, a partner specializing in personal planning at the New York firm Proskauer. “We have a lot of same-sex couples who are going to review and revise their estate plan documents. It’s exciting because it’s going to allow us to do some traditional planning that we’ve done for [straight] couples for years, and now we’ll be able to do that same kind of planning for same-sex couples. There’s a sense of we can now do what we should have been able to do all along.”

While “a lot remains to be analyzed,” he said, some married couples are considering filing amended tax returns, to get some money back, or even moving altogether. One wealthy couple who retired to Florida are thinking about coming back to New York because Florida does not recognize same-sex marriages. “There now is an incentive for them to move out of the state,” he said. “It’s one of the first things that crossed their mind.”

“The tone I’m hearing is that clients are reacting positively,” he added. “They’re trying to understand the effects, but it’s a positive feeling. It’s a big benefit and it’s been a long time coming.”

When it comes to the immigration possibilities for bi-national couples, “Everyone’s abuzz … Just elated, just so happy,” said immigration attorney Marcia Needleman, who’s already fielded a rash of calls and e-mails. “We’re getting our petitions ready, we want to file, it’s very exciting. There are families that were just torn apart because of this.”

Ken Thompson and Otts Bolisay of Seattle, Washington were one such pair with bad news on the horizon. Although Bolisay, who was born in the Bahamas, has been in the U.S. for more than two decades on a variety of student, travel, and work visas, his current documentation is scheduled to run out in 2014. In 2007, he was sent back and forced to wait a year before he could apply again. 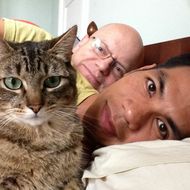 “My temporary status in the country has affected every decision we’ve made, whether small or large,” Bolisay told Daily Intelligencer after DOMA fell. Deciding that they “couldn’t allow our lives to be dictated by that kind of instability,” Bolisay and Thompson bought a house last August, even with the 2014 deadline hanging over them. (They also have two cats.) But Bolisay internalized the temporary nature of his time here.

“I haven’t really thought about the future a lot,” he said. “It was a defense mechanism for me to live that way.” No longer: After the Supreme Court decision, which will allow Thompson to sponsor Bolisay for citizenship, he wanted to get to work on the house. “There’s things like the color of the walls,” he said. “It occurred to me last night, we need to repaint our bedroom! It’s that sense of permanence and stability that’s starting to sink in.”

There’s at least one other order of business. “We definitely need to get married,” said Bolisay. “Even though marriage equality passed in December [in Washington], we knew that DOMA was still standing in my way. Now it makes more sense to do it as soon as possible. One of us needs to propose to the other!”

+Comments Leave a Comment
After DOMA: Gay Couples Look to the Future