Josh Barro, in the course of making some sensible points, argues that liberals are just about as hypocritical as conservatives are about stimulus. They only care about it insofar as it lines up with their long-term preferences about the size of government:

Liberals don’t actually oppose all fiscal austerity. They cheered for the expiration of the Bush tax cuts on the wealthy and mostly shrugged at the end of the payroll tax holiday. It’s only domestic spending cuts that are really getting the left riled, because they don’t want to cut spending.

Is that true? First of all, liberals did sort of accept the payroll tax hike as a fait accompli — everybody knew Congress was going to kill it — but certainly they didn’t like the end of the payroll tax cut; see Brad Plumer and Matthew Yglesias for examples of liberals decrying it. (Plus, of course, Barack Obama and congressional Democrats passed the payroll tax break in the first place.) 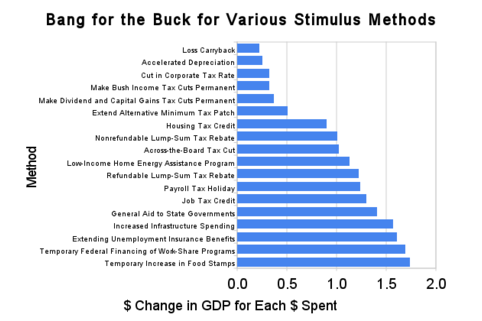 It seems perfectly sensible to favor reasonably efficient kinds of stimulus and oppose extremely ineffective kinds. The upper-income portions of the Bush tax cuts produce a return in the neighborhood of 25 cents on the dollar, which is horrible, compared with a return five times as large for other kinds of stimulus.

THE FEED
3:33 p.m.
what we know
what we know
U.S. Shoots Down China’s Balloon: Updates
By Chas Danner
“We’re gonna take care of it” President Biden told reporters earlier Saturday.
9:00 a.m.
early and often
early and often
The Democrat Who Could Take Down Kyrsten Sinema
By Ben Jacobs
Ruben Gallego will try to fulfill the left’s dreams by challenging Arizona’s newly independent U.S. senator.
2/3/2023
early and often
early and often
House Republicans’ Assault-Weapon Pins Aren’t Just a Taunt
By Ed Kilgore
Owning the libs may be an added bonus, but Second Amendment absolutists clearly intend them as a threat against those who challenge gun rights.