This person is not using Waze.

Waze, the Israeli-born “social GPS” app that was purchased by Google this week for a reported $1.1 billion, brings interactivity to the driving experience. Users plug in traffic jams, obstacles in the road, police speed-checks, and other road impediments as they see them, and the app uses that data to create a real-time network that helps other Waze users get to their destinations faster. As they use the app, Wazers earn “bonus points” and “road goodies” and are ranked on a leaderboard. The app is among the most successful examples of Silicon Valley’s “gamification” craze, in which everyday tasks like driving are given the addictive, button-pushing quality of a video game.

Google is excited about the acquisition of Waze, which it called a “great source of timely road corrections and updates.” But some road-safety advocates are shuddering at the prospect of more people using Waze, an app they say has the potential to distract drivers with a flurry of icons and notifications and put them at greater risk of an accident.

Here’s a screenshot from the Waze app. As you can see, Waze shows its users much more information on a single screen than maps apps from Google and Apple. There are eight icons in view, each indicating the presence of a police speed-check, a traffic-light camera, heavy traffic, or some other hazard, along with the usual turn-by-turn directions and estimated-arrival-time information. Those icons change as a driver progresses along the route — meaning that over the course of a normal commute, a Waze user will be confronted with dozens of alerts. 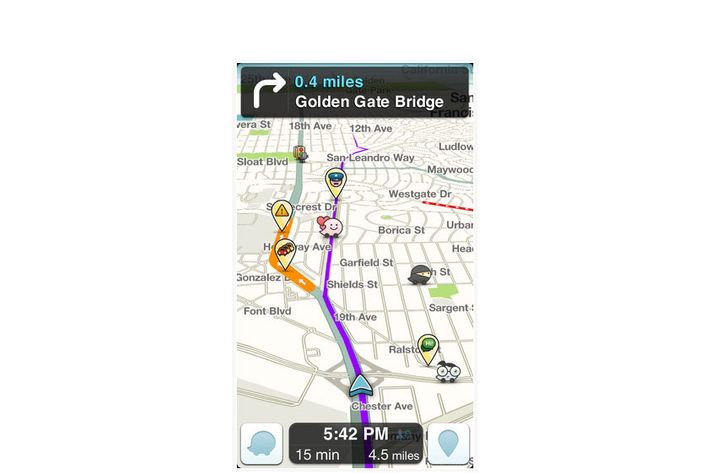 Waze has tried to make its app safer for drivers. It has disabled text input when it detects that a car is in motion. (Users can override the text-input block, but only by telling Waze they are riding in the passenger seat.) And last year, it added a hands-free option, allowing drivers to input alerts with voice commands instead of typing them on their phones.

But even when used properly, Waze could still pose a risk to drivers. A landmark study released by the Foundation for Traffic Safety this week showed that drivers who use speech-to-text commands to interact with apps experienced “a higher level of cognitive distraction” than even drivers who talked on a handheld phone and were less likely, for instance, to scan for people crossing at a crosswalk than drivers partaking in other distracting activities.

Noam Bardin, the CEO of Waze, told me that concerns about Waze’s safety on the road were overblown. In a statement, Bardin said, “Safe driving is core to the Waze user experience … Waze remembers favorite routes, disables text input while the car is in motion, and automatically reroutes the car if traffic changes. Every input is hands-free, even real-time reporting.”

Despite Waze’s safety measures, some aren’t convinced. Rocco Pendola, a writer at TheStreet, called Waze “a fender bender or life-changing accident waiting to happen” earlier this year because of its many icons and user feedback channels. “Everyone is under the immediate assumption that hands-free means it’s safe,” Jennifer Smith, an advocate against distracted driving and speaker whose mother was killed in a collision with a driver who was talking on a cell phone in 2008, told Daily Intelligencer.

Jeff Haley, a founder of the Distracted Driving Foundation, said he hadn’t done research into Waze specifically but said it wasn’t good enough to substitute voice commands for touch-screen interaction. “There needs to be technology in phones or cars or both that will limit their use by a driver when moving without limiting use by a passenger,” he said. “This is certainly heading in the wrong direction.”

The National Highway Traffic Safety Administration, the official government agency overseeing safe-driving efforts, told me it “has not conducted research on [Waze], so therefore we cannot offer comment on it specifically.” But the agency said it was “currently gathering information and developing guidelines that will apply to portable and aftermarket devices, including cell phones.”

Waze’s ease of use and (and its nearly 50 million users) have made it a darling of the tech sector. It has been a rumored acquisition target for months and attracted the interest of Apple and Facebook before being bought by Google. Under Google’s ownership, the company will remain independent but likely see its user base grow with Google’s resources behind it. And as Google considers adding revenue-generating features like local advertising to Waze’s already-packed interface, it may raise the question: How much information is too much for drivers to handle safely?

Smith said she understands the appeal of apps like Waze but also wants users to understand the danger they can introduce to the driving experience.

“I know these technologies are going to keep coming,” she said. “But we need to understand that we’re driving a 4,000-pound deadly weapon. Anything can happen in a split second.”