Surviving Boston bombing suspect Dzhokhar Tsarnaev is facing a 30-count indictment from a federal grand jury, including charges for using a weapon of mass destruction in the attack that killed 4 people and injured more than 260. The filing from the United States District Court of Massachusetts features new details about the April bombing and the 19-year-old Tsarnaev’s behavior in both the lead-up and aftermath of the attack. For example, he allegedly downloaded books titled The Slicing Sword, Against the One Who Forms Allegiances With the Disbelievers and Takes Them As Supporters Instead of Allah, His Messenger and the Believers, with a foreword by Anwar Al-Awlaki, as well as Defense of the Muslim Lands, the First Obligation After Imam, by “Father of Global Jihad” Abdullah Azzam, among others.

The indictment also alleges that Tsarnaev had the issue of the Al Qaeda magazine Inspire with directions for building a pressure-cooker bomb on his computer, as previously assumed.

Tsarnaev detailed his beliefs and motivations on the wall of the boat where he was found hiding by police and eventually apprehended: 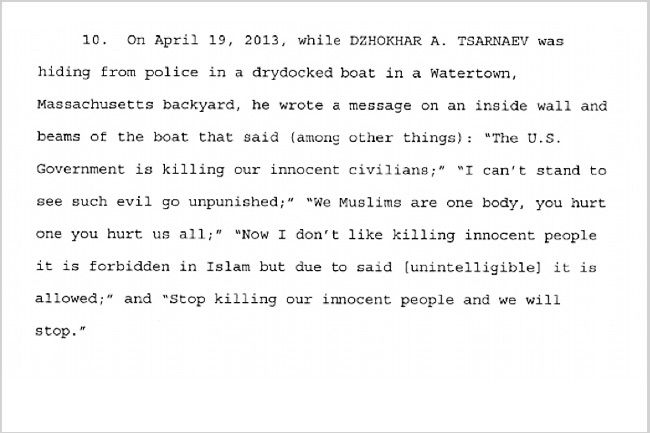 He will face the death penalty on 17 of the 30 charges.