On the human-interest side of things, NSA leaker Edward Snowden was understandably vague about his personal life. The Guardian did report that he had a girlfriend in Hawaii, who knew he was leaving town, although not why — “That is not an uncommon occurrence for someone who has spent the last decade working in the intelligence world,” he said. But as Snowden probably could have told her, it was only a matter of time before she was tracked down online. 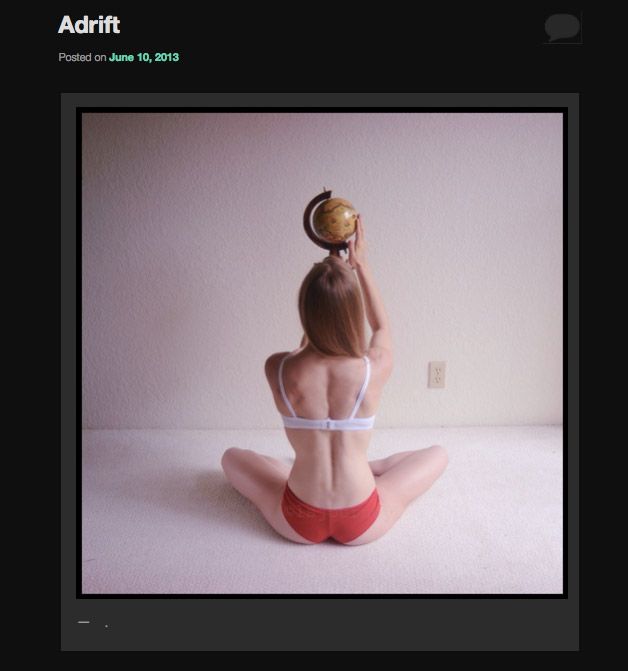 Identified as Lindsay Mills, she blogged extensively and with many photos of herself on the website L’s Journey, “Adventures of a world-traveling, pole-dancing super hero.” She wrote for the last time, in a post called “Adrift,” just yesterday and then deleted the site, but it lives on through Google cache, because PRISM or something. Along with a photo of a woman in her underwear staring at a tiny globe, she wrote of the Snowden situation in misty terms:

For those of you that know me without my super hero cape, you can probably understand why I’ll be refraining from blog posts for awhile. My world has opened and closed all at once. Leaving me lost at sea without a compass. Surely there will be villainous pirates, distracting mermaids, and tides of change in this new open water chapter of my journey. But at the moment all I can feel is alone. And for the first time in my life I feel strong enough to be on my own. Though I never imagined my hand would be so forced. As I type this on my tear-streaked keyboard I’m reflecting on all the faces that have graced my path. The ones I laughed with. The ones I’ve held. The one I’ve grown to love the most. And the ones I never got to bid adieu. But sometimes life doesn’t afford proper goodbyes. In those unsure endings I find my strength, my true friends, and my heart’s song. A song that I thought had all but died away, when really it was softly singing all along. I don’t know what will happen from here. I don’t know how to feel normal. But I do know that I am loved, by myself and those around me. And no matter where my compass-less vessel will take me, that love will keep me buoyant.

She also included a video of herself performing titled “Fish out of Water,” from her personal YouTube channel:

“Sick, exhausted, and carrying the weight of the world — a deadly combo for this performing fish,” she wrote on June 7. “Speaking of time, I feel mine is less and less of mine own recently. Therefore, I may be invoking radio silence yet again. I’ll keep you posted, or I won’t. Super heroes need an air of mystery!”

And on June 3: “I feel alone, lost, overwhelmed, and desperate for a reprieve from the bipolar nature of my current situation. My coping response of the past was to flea to foreign lands. Trying to outrun my misfortune. But before I can sail away to lands unknown I need to wipe my misguided tears and reflect on all that is happening. Listen to my core. Find zen or something like it. And breathe into what little patience I have left.” 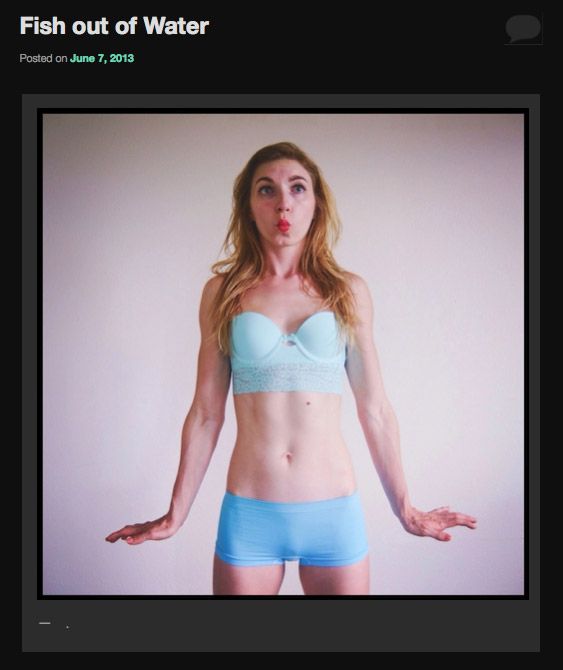 The blog features scattered references to Mills’s boyfriend, referred to only as “E,” the “man of mystery” for whom she moved to Hawaii. “I was able to finally introduce E to my skeptical friends (they weren’t quite sure E existed),” she wrote.

Although Mills, a ballerina and member of a local acrobatics troupe, mostly refrained from musing on politics, she did write a Fourth of July post last year, with echoes of Snowden: “For the land that I love is ever-changing and I fear that it’s straying from the freedom it has always represented. America is still one of the greatest, but she’s falling in my eyes. I hope her people see where she’s going and ask themselves ‘is this really how I want to live?’”

To round out her robust Internet presence, Mills is also active on Twitter:

Life has a way of changing

To delete or not to delete. That is the question.

As we’ve learned, it probably doesn’t matter either way.