While his girlfriend bared her body and soul online, NSA leaker Edward Snowden’s Internet trail appeared sparse: no Facebook, no Twitter, no Instagram. But the 29-year-old former CIA analyst does have an online history of his own, as revealed in part by Reuters today, that starts at an anime company and proceeds to hit just about every geek stereotype one would expect of an IT whiz. As an employee of Ryuhana Press, a start-up selling Japanese art, Snowden’s since-deleted (but still-available) profile included his real birthday, nicknames (Edowaado, Phish, the True HOOHA), and references to the video game Tekken.

“I like Japanese, I like food, I like martial arts, I like ponies, I like guns, I like food, I like girls, I like my girlish figure that attracts girls, and I like my lamer friends. That’s the best biography you’ll get out of me, coppers!” he wrote circa 2002. “I really am a nice guy, though. You see, I act arrogant and cruel because I was not hugged enough as a child, and because the public education system turned it’s wretched, spikéd back on me.” 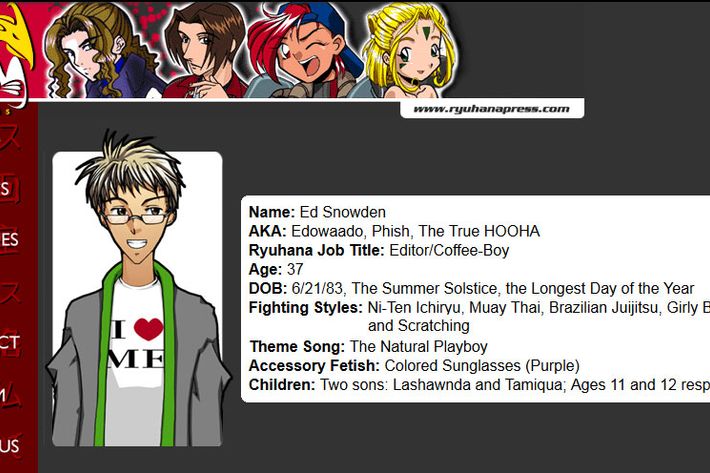 A wider search of the username “TheTrueHOOHA” turns up similar interests that, while not confirmed to be Snowden, are certainly in line with those expressed by the teenage high-school dropout working at Ryuhana. For example:

- The Ars Technica message board: TheTrueHOOHA had 773 posts beginning in 2001, including threads about Final Fantasy XI and Xbox, where he wrote on May 19, 2006:

That’s the sound of freedom, citizen!

Patriot Act. If they misinterpret that actions I perform, I could be a cyb4r terrorist and that would be very fucking bad.

The obvious solution is don’t get caught – and this is the only thing I can figure, as HTTP, SMTP, and SSL are all involved. If you’ve got a better method, I assure you that I’m all ears.

Seriously, the reason I’m so concerned is because of the lack of understanding – that’s why I made this thread. I don’t want to be paranoid, I want to be protected, but I’m not sure where to draw the line.

In another post titled, “Has anybody considered working as IT security in Japan?” Snowden inquired about finding a job overseas. “All things considered, American certificates, especially in internet security, should prove to be extremely attractive,” the user wrote. “There have also been a couple studies that show out of qualified applicants, blondes are hired more often in Japan.” And later: “I summon your soapbox-strength opinions! Surely you can’t be too busy debating gun control and dug-up bodies! I’m but a wee slip of a man who desperately searches for a scrap of interesting reading material! I want to expatriate! I want to expatriate with flair and clandestine meetings!”

- Dungeons & Dragons Online: The same username was also registered but has been deleted.

- More video games: On a separate forum, tied to the URL that once hosted Ryuhana Press’s website, TheTrueHOOHA posted a mash-up of Megaman and “Bohemian Rhapsody.”

Whatever one’s thoughts on the debate over Snowden’s actions and honor, there’s no arguing he was once but a normal bespectacled white guy working with computers.

+Comments Leave a Comment
Edward Snowden Is a Huge Nerd

THE FEED
6:00 a.m.
the inside game
the inside game
What Biden Privately Thinks About the Midterms
By Gabriel Debenedetti
Behind closed doors, his 2022 priorities (like beating Ron Johnson) are also about his 2024 reelection.
10/6/2022
politics
politics
Biden Pardons Thousands of Marijuana Charges, ‘Dank Brandon’ Memes Follow
By Nia Prater
The president frees up federal weed policy.
10/6/2022
politics
politics
Feds Reportedly Think They Have Enough to Charge Hunter Biden
By Benjamin Hart
Investigators are said to have enough evidence to charge the president’s son over unpaid taxes and allegedly lying on an application to buy a gun.