The French Open’s Sunday finals match between Rafael Nadal and David Ferrer was briefly and theatrically interrupted by protesters, one of whom managed to get onto the court. A few moments after his fellow demonstrators broke the tennis silence with chanting and the unfurling of banners, the shirtless, masked, flare-waving man leaped over fans in the front row and ran toward Nadal as he was preparing to serve.

The player (who went on to beat his opponent 6-3, 6-2, 6-3 for his eighth singles French Open title, in case you were wondering) jumped out of the way, and security guards quickly tackled the guy and dragged him off the clay. The photos are pretty great, which is why it’s too bad that the demonstrators were protesting France’s legalization of same-sex marriage. 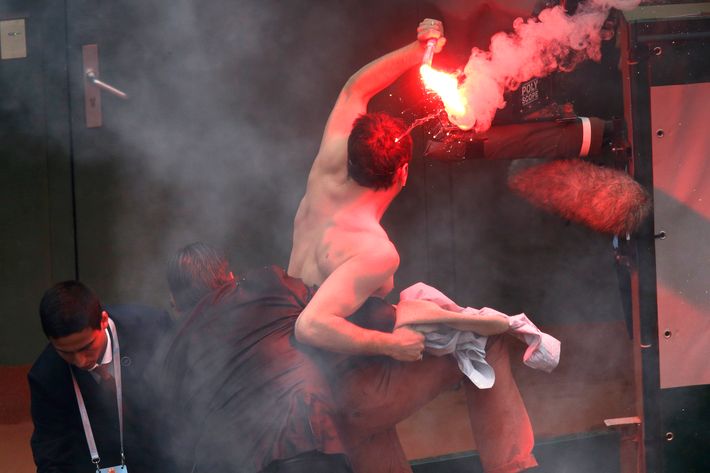 THE FEED
15 mins ago
first person
first person
I Lost My Brother Twice
By Alex Brook Lyne
First to schizophrenia, then forever to the city.
12/8/2022
sports
sports
Brittney Griner Is Coming Home From a Russian Prison
By Margaret Hartmann and Nia Prater
The WNBA star is headed home after being released in a prisoner swap for the notorious international arms dealer.
12/8/2022
stop the presses
stop the presses
Just What Did the Times Walkout Change?
By Shawn McCreesh
Some employees have said they are ready to vote on a strike authorization as soon as tomorrow. Others worry this has all gone too far.

258-169-1, House passes bill to protect same sex marriages. 39 Rs vote for it. Bill heads to Biden
—@mkraju
12/8/2022
brittney griner
brittney griner
The 7 Craziest Facts About Arms Trafficker Viktor Bout’s Career
By Matt Stieb
Getting to know the “merchant of death” the U.S. just sent to Russia in a prisoner swap for basketball star Brittney Griner.
12/8/2022
brittney griner
brittney griner
The Queens Lawyer Who Could Help Free Brittney Griner
By Amos Barshad
Steve Zissou (his real name) has spent years softening the image of notorious arms dealer Viktor Bout. His efforts might be about to pay off.
12/8/2022
early and often
early and often
Climate Hawks Should Have Given Joe Manchin His Pipeline
By Eric Levitz
Progressives must prioritize expediting the build-out of clean energy over obstructing fossil-fuel development.
12/8/2022
the city politic
the city politic
The Queens Native Tasked With Making Legal Weed Work
By Mychal Denzel Smith
Christopher Alexander is building New York’s budding market from scratch.
12/7/2022
early and often
early and often
Letitia James’s Office Is Facing Its Own Sexual-Harassment Scandal
By Nia Prater
The New York attorney general has been accused of handling sexual-harassment claims against her chief of staff differently than those against Cuomo.
12/7/2022
tremendous content
tremendous content
Trump Is Paying His Diet Coke Valet’s Legal Fees
By Margaret Hartmann
The Feds see Walt Nauta as a key witness against Trump in the Mar-a-Lago classified-documents case. But it turns out their bond is the real thing.
12/7/2022
early and often
early and often
It Looks Like the Supreme Court Will Not Blow Up Our Democracy (for Now)
By Jay Michaelson
A theory that would make state legislatures the ultimate decider of elections and overturn the Constitution as we know it gets its day in court.
12/7/2022
early and often
early and often
Guess Where More of Trump’s Stolen Classified Documents Turned Up
By Nia Prater
Hint: they were located among “suits and swords and wrestling belts and all sorts of things.”
12/7/2022
early and often
early and often
Will Biden’s Primary-Calendar Power Play Actually Work?
By Ed Kilgore
There are some obstacles in the road already, and the real implications of the new calendar may not be realized until 2028.
12/7/2022
the far right
the far right
German QAnon Spinoff Plotted Coup to Put Fake Prince in Charge
By Matt Stieb
Police arrested 25 people involved in an alleged plan to overthrow the government and install a disgraced aristocrat as head of state.
12/7/2022
the sports section
the sports section
The Yankees Averted Disaster by Signing Aaron Judge
By Joe DeLessio
Baseball is entertainment, and Judge is an entertainer. The Yankees simply had to keep him.
12/7/2022
early and often
early and often
Raphael Warnock Is the Exception in Georgia, Not the Rule
By Zak Cheney-Rice
The pastor turned politician defied the odds again, but Georgia is still barely a purple state.
12/7/2022
the city politic
the city politic
Meet New York’s New Republican Voters
By Ross Barkan
Crime and schools are causing a political realignment in the city, led by communities of recent immigrants.
12/6/2022
2022 midterms
2022 midterms
Herschel Walker Didn’t Just Lose; Raphael Warnock Won
By Ed Kilgore
Walker was indeed a bad Trump-recruited candidate. But Warnock ran a very impressive campaign once again.
12/6/2022
tremendous content
tremendous content
Rudy Giuliani’s 5 Worst Excuses From His Attorney-Misconduct Hearing
By Margaret Hartmann
The former mayor has offered several bold arguments for why his efforts to overturn the 2020 election shouldn’t cost him his D.C. law license.
12/6/2022
exhibit a
exhibit a
The Trump Organization Was Convicted After a Truly Embarrassing Defense
By Ankush Khardori
Any lawyer would have a hard time convincing a jury of the company’s innocence, but these lawyers acted like buffoons.
12/6/2022
the money game
the money game
5 Takeaways From Three Arrows Capital’s New York Bankruptcy Hearing
By Jen Wieczner
Su Zhu and Kyle Davies are surfing and painting in exile. Also dodging creditors and the law.
12/6/2022
politics
politics
Brian Sicknick’s Family Snubs Mitch McConnell and Kevin McCarthy
By Nia Prater
Family members of a police officer who died following the attack on the Capitol refused to shake hands with Republican leaders at a medal ceremony .
12/6/2022
poll position
poll position
What the Polls Say Today: It’s Warnock’s Race to Lose
By Ed Kilgore
Even polls that showed Herschel Walker leading in November now show Raphael Warnock slightly ahead.