If you can’t beat ‘em, join ‘em. That’s how Hillary Clinton has handled Barack Obama, and it’s how she’s dealt with jokes about her pantsuits. “I am going to be pitching Andy and others on a new show for Bravo, to fill that gap that is so apparent to some of us,” Clinton quipped at last night’s CFDA Awards. “All you really need is a small but passionate audience to be successful. We could call it Project Pantsuit.”

Yeaaah, hilarious. The truth is that the “Clinton wears a lot of pantsuits!” joke was beaten to death a long time ago, and Clinton herself is partly responsible. Herewith, a reasonably thorough history of Hillary Clinton making pantsuit jokes.

November 7, 2000: “We started this great effort on a sunny July morning in Pinder’s Corner on Pat and Liz Moynihan’s beautiful farm. And 62 counties, sixteen months, three debates, two opponents, and six black pantsuits later, because of you, here we are.” —Clinton’s Senate victory speech.

February 4, 2008: “In my White House, we’ll know who wears the pantsuits.” —Clinton on the Late Show With David Letterman.

May 5, 2008: “Thanks to the Internet, I can order new pantsuits 24/7. There’s your pantsuit joke, Dave. Are you happy now?” —Clinton doing the Top 10 reasons she loves America on the Late Show With David Letterman.

May 11, 2008: “It’s not over until the lady in the pantsuit says it is.” —Clinton, recounting a message she got from a supporter.

August 26, 2008: “To my supporters, to my champions — to my sisterhood of the traveling pantsuits — from the bottom of my heart: Thank you.” —Clinton speaking at the Democratic National Convention.

November 10, 2008: “I’m grateful to Glamour because they liked my pantsuits, and that was one of the highlights of my presidential campaign.” —Clinton at Glamour’s Women of the Year awards.

June 21, 2012: “Mike, I was in a real dilemma. I have pantsuits in nearly every color – except purple.” —Clinton at the swearing-in of Assistant Secretary for Public Affairs Michael Hammer (whose favorite color is purple).

December 1, 2012: “There I was, being gracious, the hostess of the evening, and Dave and his beautiful wife, Regina, came through. And I greeted her and said how happy we were to have her, and greeted Dave and then said, ‘Look, Dave, I took my pants off for you.’ And Dave without missing a beat said, ‘I don’t think you meant to say that.’” —Clinton speaking at the 35th Annual Kennedy Center Honors.

April 5, 2013: “I’m just glad she didn’t do a movie called The Devil Wears Pantsuits!” —Clinton on Meryl Streep at the Women in the World Summit.

Update: Clinton finally joined Twitter, and made a pantsuit joke in her bio. 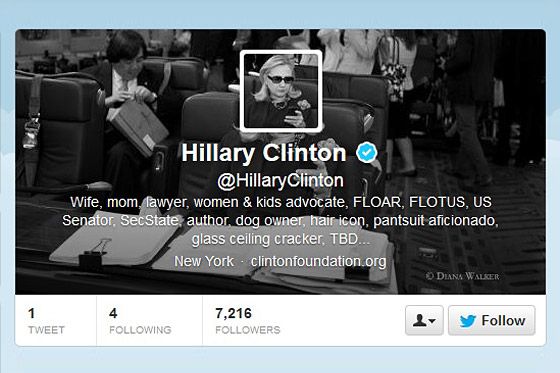