Immigration reform seems to be a simple problem of Republican Party organization. The interests of the party as a whole dictate passing a bill, but the people who need to do the passing — Republicans in Congress — have an interest in voting immigration reform down.

Two senior House Republican aides, speaking with Jonathan Weisman, offered up a staggering admission: They agree with this analysis. They just don’t care. “Speaker John A. Boehner,” Weisman reports being told, “has no intention of angering conservative voters and jeopardizing the House Republican majority in 2014 in the interest of courting Hispanic voters on behalf of a 2016 Republican presidential nominee who does not yet exist.”

Passing immigration reform would not jeopardize the House Republican majority. The House map so heavily favors the GOP that Democrats would need to win the national vote by some 7 percent to gain a majority — a near-impossibility in an off-year election, where the Democratic base tends to stay home. But it very well might threaten the jobs of House Republican incumbents, who could face primary challenges.

It might also threaten the leadership posts of figures like Boehner. Conservatives in the House are openly threatening to oust him if he tries to move immigration reform. Passing a bill with mostly Democratic votes, which almost surely would be necessary, “would be cause for removal, in my judgment,” says Rep. Tom McClintock. “We would probably be frustrated to the point of looking for new leaders,” adds Rep. Matt Salmon. In a closed-door meeting today, Boehner assured his members he will not bring up the Senate bill.

This does not mean immigration reform will die. There are still plenty of House Republicans who want the bill to pass without having to cast a vote for it themselves. Paul Ryan is enthusiastically stepping forward to pitch immigration reform to his party. Ryan, of course, would very much like to be a Republican presidential nominee one day. And Ryan gets his way within the party more than anybody else.

Part of Ryan’s task is convincing his party that it actually needs to improve its performance among Latino and Asian voters in order to win presidential elections. This proposition has come under fierce counterattack on the right, most recently by Sean Trende. Trende argues that Republicans can win presidential elections simply by jacking up their share of the white vote. Trende posits, reasonably enough, that the African-American share of the vote rose above its historical levels with President Obama on the ticket, and could likely fall back, depriving Democrats of a couple of percentage points of national support. (He neglects to mention that the Republicans, helped by the Supreme Court’s striking down the Voting Rights Act, are quickly moving on new laws designed to do just that.)

Trende’s main point is that there’s not necessarily a cap on the GOP share of the white vote. He presents this chart: 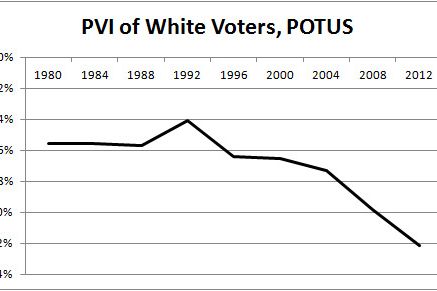 The trouble with Trende’s theory is that it doesn’t explain why the white vote will continue to move the GOP’s way. It’s been happening before, sure. But the trouble is that the oldest white voters are also the most conservative. The youngest white voters split their support almost evenly between the two parties: 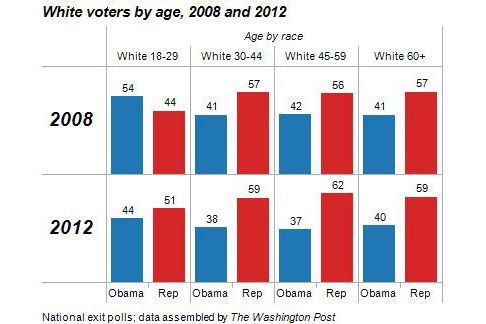 Cohort replacement is going to make the white vote less Republican, not more. Now, cohort replacement isn’t everything. Maybe the interracial alliance within the Democratic Party will fracture, as it did in the sixties, spurring whites to flee the party.

Keep in mind, though, that the racial dynamics of the modern Democratic Party are far more stable than they were 50 years ago. The New Deal Democrats were holding together a coalition of pro-civil-rights liberals and white supremacists. The Obama-era party is a coalition of nonwhites and white voters who are comfortable with diversity. The Obama coalition may fracture, and in any case, the Republican structural advantage in Congress will give it a viable power base for years. But the hope for building a nearly all-white party that regularly wins presidential elections is highly optimistic, not to mention more than a bit horrifying to contemplate.