Since Republicans took control of Congress in the 2010 elections, they have provoked a series of budget crises, all justified by what they claimed was the extraordinary, Greece-esque threat of a runaway budget deficit. The shrinking of the budget deficit has made it harder and harder to rationalize the hair-on-fire mania required to justify threats like refusing to raise the debt ceiling.

I’ve been wondering how Republicans in Congress would acknowledge this development. The answer seems to be: by moving the goalposts back. Waaaay back — like, another twenty years back. Manu Raju and John Bresnahan report that the latest hang-up is that Senate Republicans are demanding that budget talks use a 30-year timeline. (Keep in mind that the Senate is the “moderate” of the congressional GOP — House Republicans aren’t even talking to Obama.) This is actually pretty astonishing:

White House chief of staff Denis McDonough privately met with more than a dozen Senate Republicans who outlined their view of the budget picture over the next three decades instead of over the 10-year window used by administration number crunchers, according to attendees …

Rather than typical budgets that show 10-year windows, [Senator Ron ] Johnson laid out government revenue and spending projections covering three decades. The Wisconsin Republican argued that using a 30-year window would depict a more accurate picture of the growth of entitlement programs like Medicare and Social Security. One source pegged the budget gap growing from $70 trillion to $120 trillion over the next three decades, depending on the assumptions.

Basically, the crisis they’ve been decrying is looking solvable, so they’re redefining it in a way that it’s not solvable.

The grain of legitimacy here is that there is probably a long-term gap between our projected spending, mostly on retirement programs, and current tax rates. That gap largely opens up after ten years. So it does make sense to take the long-run picture into account.

But nobody has ever used longer than a ten-year budget window before. Indeed, even the ten-year window is fairly new — in the nineties, everybody used five-year budget windows. And the reason is simple: The farther out you go in time, the less reliable your forecast. A couple of years ago, the New York Times compiled a handy feature of past budget forecasts. The light-blue line is the projection; the dark-blue line the reality. Even within a few years, they diverge wildly: 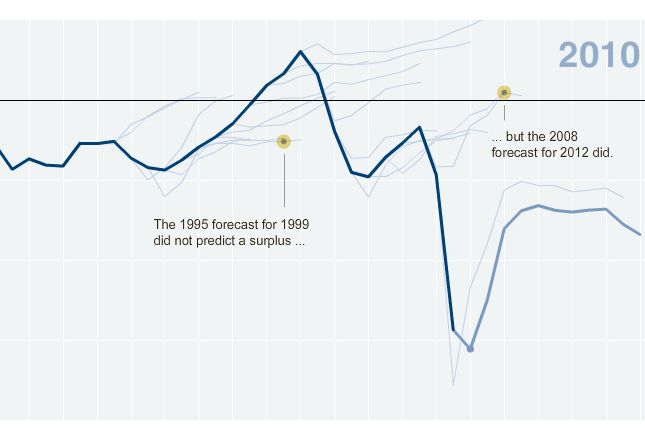 Push that out several decades, and you have, basically, blind guesswork. We do have some basic demographic trends to work with. But the largest single driver of the long-term deficit is rising health-care costs, and those costs have fallen sharply over the last five years. That single variable alone would throw off the 30-year number by trillions of dollars, let alone the fact that we can’t predict any number of other things — the pace of economic growth, wars, immigration levels.

The sensible approach here is not to completely discount the future (and the need to prepare for the retirement of the baby boom generation) but to take progressive steps, with the understanding that you can always go farther as the scale of the problem grows clearer.

But that is not the Republican position. The Republican budget stance apparently holds that the two parties must set 30 years’ worth of policy now, and that this is such an urgent task that Republicans are justified in maintaining harmful budget sequestration and even threatening to refuse to lift the debt ceiling if we don’t do it. (Taken literally, the GOP stance is that Congress would be justified in blowing up the world economy to force Obama to solve the budget problems of 2043, and not just 2023, as he proposes.)

Compounding the absurdity of this stance is that, to the extent that future deficits pose a problem, the problem is correctable. If your long-term deficit turns out to be too high, then you cut spending or raise taxes. An example of a non-correctable long-term problem would be, oh, pumping millions of tons of heat-trapping gasses into the atmosphere. The contrast on this issue offers a telling window into the Republican view of long-term risk.

Take Senator Johnson, the leading Senate budget negotiator who is insisting on 30-year targets. His position on climate change is that “for us to contemplate fixing something that is not proven is absurd.” Scientists can’t prove the massive burning of fossil fuels will harm humanity over the long run, so drill, baby, drill, and hope they’re wrong about the overwhelming probability they forecast. The existence of a huge deficit in 30 years is not proven, either. It’s a forecast subject to far more uncertainty than climate forecasts.

But Johnson and his colleagues don’t think it’s absurd to fix that unproven problem. They find it imperative — so imperative, they are willing to threaten immediate harm to the economy if we don’t. Why not just take a deep breath and try acting like a normal opposition party for a while?