It is with “sadness and dismay” that tech’s favorite bridezilla Sean Parker writes to The Atlantic’s Alexis Madrigal to defend his elaborate nuptials in a California forest, rumored to cost upwards of $10 million, plus the $2.5 million he paid to the California Coastal Commission for doing the setup, which included ruins, staircases, and a stone bridge, without a permit. While Madrigal used the enormous excess as a parable about Silicon Valley, Parker insists he just loves nature. And at least he didn’t serve caviar, like a tacky rich person.

“First and foremost is that nobody goes out of their way to get married in a redwood forest unless they really love redwood forests,” writes Parker, which seems true enough, citing his previous work with conservation groups. “The Save the Redwoods League actually consulted informally on the project from Day 1, sending their Director of Science down to the site to educate our naturalist regarding a plan for work that would be minimally environmentally disruptive to the local redwood and riparian habitats,” he adds. At this point, let us pause to reflect on the fact that this was for a wedding.

“We want [sic] to crazy lengths to ensure that nothing in the forest was harmed during the construction process,” Parker insists. “Contrary to media reports, no redwood trees were harmed by the wedding or construction. (At least none that I’m aware of.)” He concedes to making “some mistakes,” but says, “My goal was to leave the property in much better condition than when I found it.” That is a noble goal, if not exactly in line with the CCC’s conclusions. 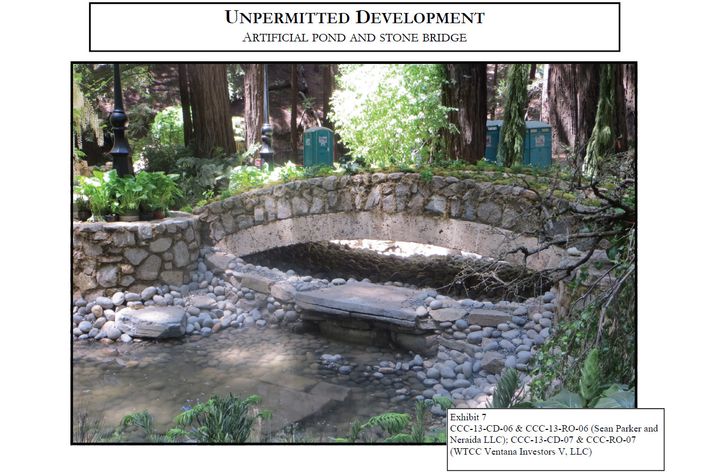 But the millions he paid to the environmental group were a choice, kind of: “You should also be aware that the $2.5 million was not, strictly speaking, a ‘fine’ for any particular violation. We conceded to pay a $1 million into the CCC’s conservation fund, and then work together to deploy a minimum of an additional $1.5 million in charitable contributions to help the Monterey/Big Sur area.” Note the careful language, and do remember the history of wealthy people making “charitable donations” to get what they want, when they want it.

“I don’t know where all this talk of castles and towers and things came from,” he adds. “We had a very specific aesthetic vision for this event that was subtle, tasteful, and carefully orchestrated. Everything we did was an homage to nature, to the natural redwood environment which I call ‘God’s cathedral.’ … None of the usual tasteless crap that rich people do at their weddings was present here — no ice sculptures, no caviar, no pop stars hired to sing their hits [sic] songs, etc. This is why your article and so many other articles have been so deeply offensive.”

And the total price tag? “WAY off base,” says Parker. “I will say, against my better instinct to tell you, that we spent roughly $4.5 million on prepping the site and big part of that was restoring the forest floor (I should say, covering the forest floor with plants) since it had been paved over in black asphalt or cleared by bulldozers before we ever laid eyes on the campground.” He’s more of a savior than anything else, in his own eyes. Read the whole rebuttal here; Madgrigal, the big softy, calls it “pretty convincing.”