It’s been nearly a week since Edward Snowden arrived at Moscow’s Sheremetyevo Airport, but the many journalists camped there have yet to catch a glimpse of him. Reporters have, however, learned a lot about the layout of the airport’s international transit zone, where the now passport-less NSA leaker is believed to be stuck as the Ecuadorian government decides whether or not to allow him to stay in their country. According to Ecuadorian president Rafeal Correa, Vice-President Biden recently made a “very courteous” call requesting that Ecuador reject any asylum requests from Snowden, and Correa promised that if or when Snowden gets to the country, “the first opinions we will seek are those of the United States.” What that means for Snowden’s chances in Ecuador is unclear but, in the meantime, the press has a few theories about where exactly he is.

Terminal E is home to the V-Express (pictured below), a less-than-glamorous “capsule hotel” that offers “cruise-ship style beds with clean towels and a standalone shower” to passengers on layover. V-Express workers won’t say if they’ve seen Snowden, though one told a Financial Times reporter that business has been bolstered by journalists, who presumably have not spotted him there. (An employee of one of the airport’s coffee shops wondered if Snowden had checked into the V-Express only to have his visit cut short. “Would it be possible to shoot someone inside the capsule hotel?” she asked a colleague, who responded, “Possible.” TripAdvisor reviewers have praised the location and not much else. 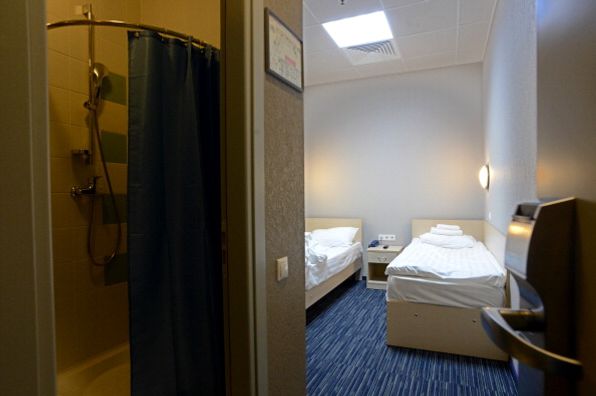 Sheremetyevo has another hotel that might suit Snowden’s needs: The Novotel Hotel, which serves travelers with longer layovers in Russia who lack Russian visas. According to ABC News, customers are “whisked away from the transit area” upon arrival and “put on a special van, and driven out of the airport by a special gate off the tarmac” to The Novotel. “There, they are kept in a special wing on the second floor under constant watch by Russian guards. They are confined to their rooms, except when they have to change money, but a guard comes with them for that as well. The only option for food is pricey room service.” The TripAdvisor reviews are mixed, to say the least, but the place does have international television channels and Wi-Fi, which we know Snowden would appreciate. Reporters who have visited The Novotel have been unable to enter the aforementioned special wing. 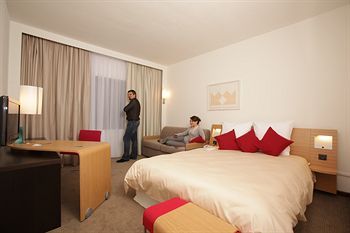 There’s also Terminal A, which is only accessible to Russian government and security officials. (There are no TripAdvisor reviews of Terminal A.) President Vladimir Putin, who has so far declined to send Snowden back to the United States, has said that Snowden is not in government custody, but some have “conspiratorially” suggested that he could still be in the locked-down terminal. Still others suggested to the FT “that Mr Putin may have a very expansive definition of what the transit zone is and that he may have ended up in another Moscow hotel guarded by special migration officers, or have made it to a foreign embassy,” though the latter seems like something the public would have heard about by now.

+Comments Leave a Comment
Is Snowden Hiding in a Moscow Airport Hotel?

THE FEED
17 mins ago
poll position
poll position
Biden Is Trump (When It Comes to Popularity)
By Ed Kilgore
Biden hopes tonight’s State of the Union address will sway voters, but there’s growing evidence that opinions of any president are hard to move.
10:29 a.m.
early and often
early and often
Trump Wants to Divide Republicans and Conquer DeSantis
By Ed Kilgore
Nikki Haley is no threat to Trump, who would prefer a large field to muddy the track in his real primary race against Florida‘s governor.
9:12 a.m.
what we know
what we know
Horrifying Scenes of Quake Damage From Turkey, Syria Emerge
By Chas Danner
The powerful earthquakes have flattened thousands of buildings in the region, and the death toll continues to mount.