This year’s application to Tufts University asks potential students to answer the question “What does #YOLO mean to you?” Last week, Dean of Undergraduate Admissions Lee Coffin announced the revamped essay section in a blog post titled “Let’s Get This Party Started,” writing, “To get your writing juices flowing, we penned questions that won’t sound like the ones you’ll encounter on (most) other college applications. That’s not an attempt to make it ‘harder’ to apply to Tufts; it’s our way of saying ‘think outside the box.’ Here they are (imagine a drum roll):”

… Jonathan Larson proclaimed “No day but today!” and most recently, Drake explained You Only Live Once (YOLO).  Have you ever seized the day? Lived like there was no tomorrow?  Or perhaps you plan to shout YOLO while jumping into something in the future. What does #YOLO mean to you?

Daily Intelligencer has obtained an expanded list of Tufts’ essay questions for the class of 2018:

1. If you could “poke” any historic figure, who would it be? What three status updates would they “like” on your timeline? And what reasons might they have to defriend you?

2. If you Snapchatted a nude selfie of your personality to the world and it got screen-grabbed, what would we see? Please Instagram your answer to: TuftsSelfieNoLulz. 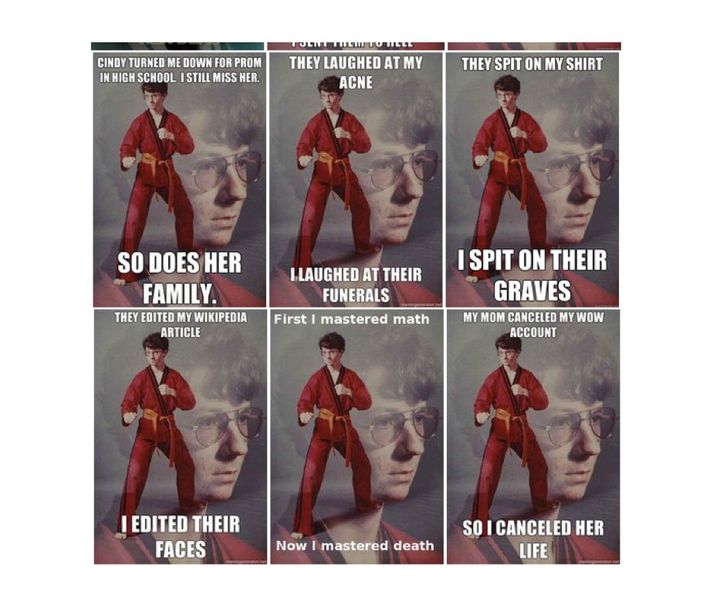 4. On a recent episode of My Super Sweet Sixteen, Rachel got angry with her stepfather for hiding her belly-button jewelry and making her cover up her tramp stamp. What aspect of your personality would you hide from MTV producers?

5. We’ve all felt like Karate Kyle at some point. Have you ever witnessed bullying in school or been bullied yourself? What can we do as a society to combat the issues facing Karate Kyle?

6. If you could save one person or thing from a Sharknado, who or what would it be and why? And what do you see as the greatest threat to the environment today?

7. Make a Vine loop of you and a friend twerking and show it to a parent or guardian. Transcribe the conversation and use it to evaluate how your family background influences the way you see the world.

8. Teen Mom star Farrah Abraham said she decided to wax and pluck her 3-year-old daughter Sophia’s unibrow because she “felt bad for her.” What’s the most “totes cray” thing you’ve ever done, and how did it lead to personal growth?

9. Imagine for a moment that instead of butt-chugging vodka for a quick and totally intense buzz you could butt-chug a bottle of instant knowledge about the world. From science to history, language to art, what would your bottle be full of?

11. This year, Amanda Bynes famously tweeted, “I want Drake to murder my vagina.” Using metaphor, describe a special attribute or accomplishment that sets you apart.

12.  Tell us about a time you demonstrated leadership ability.

13. Justin Beiber was recently caught on video urinating in a bucket and spraying something on a picture of the ex-president while shouting “Fuck Bill Clinton!” What political figure has most inspired you?

14. Amanda Bynes also tweeted to Rihanna that “Chris Brown beat you because you’re not pretty enough” and that “Barack Obama and Michelle Obama are ugly!” Who exactly is Amanda Bynes? Is she one of those troubled ex-Disney kids? Optional: Describe what community service means to you.

15. On the Internet, cats in pictures often ask, “I can haz cheeseburger?” But what does that mean? What makes it so funny? Was there a movie, TV show, or song at some point in which a cat asked for a cheeseburger or something? Please include a link and explain clearly and concisely.

16. In your opinion, is it too late for the admissions office to do one of those Harlem Shake videos? Like, is it already super lame, or do you think if we add a new, funny twist to the footage we already have that it might still get some viral play on YouTube? Offer your answer in 140 characters or less and just be honest.

8:00 a.m.
just asking questions
just asking questions
A Different Way to Prevent Mass Shootings
By Benjamin Hart
Talking with Mark Follman, whose new book explores how behavioral threat assessment could help a country paralyzed by gun violence.
5/26/2022
early and often
early and often
Is Trump Really a Republican Kingmaker?
By Ed Kilgore
The former president is still touting his highly inflated endorsement record, but his humiliating losses in Georgia tell a different story.
5/26/2022
gun violence
gun violence
There Is a Future for Gun Control
By Kevin T. Dugan
The NRA won after Sandy Hook, but today the gun lobby is in disarray and gun safety is slowly making gains in states.
5/26/2022
the money game
the money game
The Rise and Fall of Wall Street’s Most Controversial Investor
By Jen Wieczner
Cathie Wood built a thriving brand out of price-prediction porn — then the tech bubble popped.
5/25/2022
the national interest
the national interest
The Conservative Playbook for Deflecting Anger After Mass Shootings
By Jonathan Chait
Ignoring the obvious connection between gun deaths and lax gun laws in three easy steps.
5/25/2022
texas school shooting
texas school shooting
Beto O’Rourke Confronts Greg Abbott Over Shooting: ‘This Is on You!’
By Matt Stieb
The Democratic candidate for governor interrupted a press conference about the elementary-school shooting before he was pulled away by security.
5/25/2022
early and often
early and often
2022 Midterms: A Guide to the Races Worth Watching
By Ed Kilgore
A cheat sheet to keep track of all the crucial races, primary upsets, and campaign drama — Trump-fueled and otherwise — from now through Election Day.
5/25/2022
early and often
early and often
The Bush Political Dynasty Ends With a Whimper
By Ed Kilgore
The once-dazzling George P. Bush lost badly to Trump-backed Attorney General Ken Paxton, whom he called a “philandering felon.”
5/25/2022
gun violence
gun violence
Why We Keep Letting This Happen
By Ross Barkan
A non-exhaustive list includes the filibuster, radical red states, the archconservative Supreme Court, and a toxic national tradition.
5/25/2022
early and often
early and often
Trump Dumped Mo Brooks. He Made the Senate Runoff Anyway.
By Ed Kilgore
The January 6 speaker survived Trump’s ludicrous “woke” accusation and will face Katie Britt in next month’s Alabama GOP Senate runoff.
5/25/2022
early and often
early and often
The Devil Went Down to Georgia and Lost
By Ed Kilgore
Trump spent the past two years working to exile Brian Kemp and Brad Raffensperger from the GOP, but he couldn’t do it.
5/25/2022
early and often
early and often
President Mike Pence Would Be Worse Than Trump
By Ross Barkan
The former vice-president is attempting to bolster his chances in 2024, but Democrats would be wise to beware any attempt to rehabilitate his image.
5/25/2022
foreign affairs
foreign affairs
The American Running Rescue Missions in Ukraine
By Rachel Nostrant
Kathy Stickel has pulled dozens of people out of harm’s way by putting herself in it.
5/25/2022
plagued
plagued
Welcome to the Next COVID Wave
By Chas Danner
The new wave fueled by the BA.2.12.1 subvariant might not be as big or bad as the last one, but there are still plenty of ways it can go wrong.
5/24/2022
2022 midterms
2022 midterms
Republicans May Have Sabotaged Their Best Chance to Beat Whitmer
By Matt Stieb
Five GOP candidates for governor in Michigan — including the top two contenders — faked signatures to get their names on the ballot.
5/24/2022
adam neumann
adam neumann
Adam Neumann’s New Business Plan
By Kevin T. Dugan
The former WeWork CEO wants to get rich(er) by helping corporations appear more environmentally sustainable than they really are.
5/24/2022
partygate
partygate
Millionth Boris Johnson Pandemic Party Exposed
By Benjamin Hart
Will this be the one that forces his resignation? Nah, probably not.
5/24/2022
early and often
early and often
Perdue Ends Flailing Campaign With Racist Remarks About Stacey Abrams
By Ed Kilgore
The former senator capped off his Trump-inspired challenge to Governor Brian Kemp by accusing the Democrat of “demeaning her own race.”
5/24/2022
games
games
The Most Disturbing Part of the Yankees’ ‘Jackie’ Incident Was the Fans
By Will Leitch
Yankee Stadium picking up Josh Donaldson’s taunt was another example of crowd dynamics gone haywire.
5/24/2022
vision 2024
vision 2024
Democrats Quietly Search for an Alternative to Biden in 2024
By Gabriel Debenedetti
Inside the 2024 soul-searching that’s happening in every corner of the Democratic Party — except the White House.
5/23/2022
new york
new york
Sean Patrick Maloney Is Getting Primaried After Ticking Off Democrats
By Matt Stieb
Progressive state senator Alessandra Biaggi is expected to challenge Maloney after he ditched his own seat to run in a less competitive district.
5/23/2022
politics
politics
House Ethics Committee Investigates Madison Cawthorn for Promoting Crypto
By Matt Stieb
Cawthorn is leaving in January, but he may be in trouble before then.