Sandy Hook gunman Adam Lanza, who shot and killed twenty elementary-school children, six adult staffers, his mother, and himself in December, spent his teenage years online talking about guns. A report by the Hartford Courant reveals for the first time the details of Lanza’s Internet life, including postings from 2009 and 2010, when Lanza was 17, on firearm message boards and Wikipedia entries about mass shootings. They are haunting.

Although the Courant declines to reveal the user name authorities believe belonged to Lanza, a simple Google search of the quoted sections indicates that he went by the handle “Kaynbred” on sites like TheHighRoad.org and GlockTalk.com.

“In Connecticut, fully automatic firearms are legal to own but selective fire is prohibited,” he wrote in one post. “I vaguely recall reading ~1 year ago about a company which alters them to fire exclusively automatically (or something in that vein), but I do not know how that process works. For example, with whom would I correspond to modify a Title II M2 Carbine that is currently in another state to fire fully automatically before it is sent to Connecticut?”

Elsewhere, Kaynbred said, “I always prefer asking through proxy when I can avoid speaking to someone directly. I was just wondering if anyone knew because I have a fetish for .32 ACP,” a reference to specific ammunition.

The same user name was a regular player of the first-person shooter game Combat Arms, where Lanza clocked 83,496 kills in 4,901 matches.

But maybe most frightening are Lanza’s edits to the Wikipedia entries of large-scale killings, including the Dawson College shooting, where Kaynbred corrected “.9mm” to “9mm” and then made a joke about the weapon’s strength:

On the listing for Kip Kinkel, who killed his parents and shot 27 people at a high school in 1998, Lanza, as Kaynbred, again specified the weapons used: 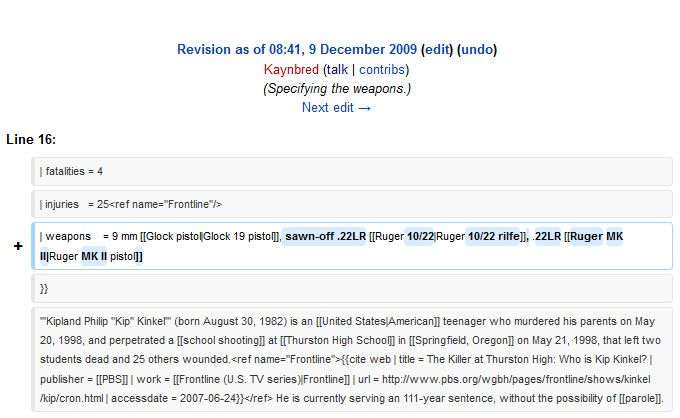 Oddly enough, Anders Breivik, the man who killed 77 people in Norway’s 2011 massacre and was himself an object of fascination for Lanza, also had a thing for editing Wikipedia articles.