It was bound to happen sooner or later: An anonymous woman has told the Arizona-based gossip and nudies site The Dirty that she carried on an explicit online affair with mayoral candidate Anthony Weiner — after he was busted and forced to resign from Congress for the exact same thing. “She was lured by Anthony Weiner post scandal via Facebook,” wrote the site’s editor Nik Ritchie yesterday. “They had a relationship for 6 months and she believed they were in love … The relationship consisted of Anthony Weiner and Anonymous sending sexually explicit pictures of each other and having sexual conversations via phone. The best part was Anthony used an alias this time thinking this would protect him. Anthony Weiner used the name ‘Carlos Danger’ when he would email pictures of his penis via Yahoo.”

“I said that other texts and photos were likely to come out, and today they have,” said Weiner in a statement, after hours of silence about the allegations. “As I have said in the past, these things that I did were wrong and hurtful to my wife and caused us to go through challenges in our marriage that extended past my resignation from Congress.”

Weiner continued, “While some things that have been posted today are true and some are not, there is no question that what I did was wrong. This behavior is behind me. I’ve apologized to Huma and am grateful that she has worked through these issues with me and for her forgiveness. I want to again say that I am very sorry to anyone who was on the receiving end of these messages and the disruption that this has caused. As my wife and I have said, we are focused on moving forward.”

By stating that “some things that have been posted today are true and some are not” and that the “behavior” is “behind” him, Weiner did not exactly confirm or deny that the above conversations took place in August 2012, after he got caught but before his comeback. The “challenges” in Weiner’s marriage, he said, “extended past my resignation from Congress,” which further indicates that the alleged dates could be legitimate. Ultimately, the vague timeline leaves more questions and assures this is not over yet.

“Even post scandal, I thought he was misunderstood,” said the woman, who claims she was 22 years old at the time. “Until I got to know him. I thought I loved him. Pretty pathetic.”

In follow-up posts, The Dirty printed alleged chats both filthy — as we’ve seen before — and mundane, including the man alleged to be Weiner offering the woman a chance to be featured on a panel hosted by Politico. “but do me a solid,” he wrote. “can you hard delete all our chats here.”

“He promised her many things including a condo in Chicago (1235 S. Prairie Ave) where they were planning to meet up to have sex,” claims The Dirty. “Anthony Weiner has a shoe fetish, particularly heels.”

In a subsequent message, Weiner mentioned his two cats. In his first sexting scandal, he was also pictured with two cats. As The Atlantic Wire reported, “Someone who worked closely with Weiner in the past contacted us and attested that Weiner does indeed have a cat with one eye. So there’s that.” 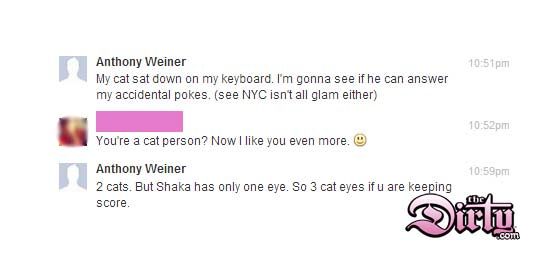 The nastiest of the messages supposedly took place on the question-and-answer site Formspring, under the username Dangr33. A page using the same name still exists, but is private. There’s also an alleged dick pic (NSFW, obviously), from a familiar angle, although there’s no confirming who the blurred-out member belongs to.

Because of Weiner’s far-from-definitive statement, there is no independent confirmation — or denial — that the chats occurred after the first scandal, as there are no dates in the screenshots, only times. According to the woman’s timeline, the relationship “began to fizzle out” in November 2012. “We only spoke once in December 2012, and then I didn’t hear from Anthony Weiner again until April 11, 2013 when a NYT article about him was released,” she said. “He reactivated his Facebook and asked me what I thought of it.”

One part of Weiner’s statement is clear and true: He did warn that something like this could happen when he announced his attentions to pursue the mayor’s office. “If reporters want to go try to find more, I can’t say that they’re not going to be able to find another picture, or find another person who may want to come out on their own,” he said in April. “Basically, New Yorkers know the story. I did it. I did it with multiple people.”

8/6/2022
plagued
plagued
What Is Going on With America’s COVID Booster Plan?
By Chas Danner
The Biden administration wants to reboot the U.S. booster drive with reformulated vaccines this fall. Here’s what we know.
8/5/2022
conspiracist series
conspiracist series
Sandy Hook Parents Awarded Another $45 Million of Alex Jones’s Money
By Matt Stieb
The Infowars founder has had an expensive week in court, and there are still two more trials to go against other Sandy Hook victims’ families.
8/5/2022
early and often
early and often
The Drama-Lover’s Guide to the New Trump Books
By Margaret Hartmann
Love gossip but not enough to actually read the new batch of Trump books? Here are all the juicy, disturbing, and darkly amusing tidbits you missed.
8/5/2022
the money game
the money game
Elon Musk Is ‘Sick of Stuff Like This’: 8 Takeaways to His Response to Twitter
By Kevin T. Dugan
The Tesla CEO has presented his response trying to get out of buying the company, but more questions linger over his chances of success.
8/5/2022
life after roe
life after roe
Kansas Shows the Potential Power of Pro-Choice Republican Voters
By Ed Kilgore
The Kansas abortion vote confirms that there are a significant number of pro-choice Republicans. Post Dobbs, they may get fed up with their party.
8/5/2022
inflation reduction act
inflation reduction act
Sinema’s ‘Yes’ on Budget Bill Gives Democrats New Momentum
By Ed Kilgore
After a year of angst, Manchin and Sinema have finally cut deals on the climate and economic bill. Now there are just a few final challenges.
8/5/2022
the money game
the money game
Twitter’s Legal Team Just Sucker Punched Elon Musk
By Kevin T. Dugan
The social-media platform launched a sneak attack against the guy it wants to buy the company.
8/5/2022
just asking questions
just asking questions
Will the Inflation Reduction Act Make the Carbon-Capture Business a Reality?
By Matt Stieb
A UC Irvine professor considers if the IRA’s proposed incentives could be a breakout moment for the nascent industry of sucking carbon out of the air.
8/5/2022
the inside game
the inside game
The Super-High-Stakes 2022 Race No One Is Talking About
By Gabriel Debenedetti
Charlie Crist has been Florida governor before. He thinks he can win again, toppling Ron DeSantis and sending the GOP into chaos in the process.
8/4/2022
sports
sports
Tuberville and Manchin Offer to Fix the College-Sports Money Mess
By Ed Kilgore
Federal legislation on player compensation is needed. But maybe the effort should be led by lawmakers who aren’t so closely aligned with coaches.
8/4/2022
conspiracy series
conspiracy series
The Alex Jones Trial Is As Messy As You’d Expect
By Matt Stieb
He was ordered to pay $4.1 million to a Sandy Hook victim’s parents after a trial that saw him surprised by the revelation of his own texts.
8/4/2022
2022 midterms
2022 midterms
Kris Kobach Is Making Yet Another Comeback Attempt
By Ed Kilgore
The veteran nativist and vote suppresser is running for Kansas attorney general, despite failed U.S. Senate and gubernatorial bids.
8/4/2022
power
power
Officers Involved in Breonna Taylor’s Killing Face Federal Charges
By Angelina Chapin
The four men are accused of falsifying a document, using excessive force, and creating a cover story.
8/4/2022
foreign interests
foreign interests
Brittney Griner Sentenced to 9 Years in Russian Prison
By Matt Stieb
The basketball star told the judge that she hoped the ruling “doesn’t end my life here.”
8/4/2022
early and often
early and often
2022 Midterms: A Guide to the Races Worth Watching
By Ed Kilgore
A cheat sheet to keep track of all the crucial races, primary upsets, and campaign drama — Trump-fueled and otherwise — from now through Election Day.
8/4/2022
life after roe
life after roe
Religious Liberty Is for Pro-Choice People Too
By Ed Kilgore
Pro-abortion-rights clergy are heading to court, arguing that post-Dobbs abortion bans violate their freedom to practice their religion.
8/4/2022
the money game
the money game
Why Smart-Money Investors Are Shorting Trump’s SPAC
By Michelle Celarier
“Digital World isn’t just another dubious 2021 SPAC — it is a poster child for some of the worst abuses the investment vehicle has spawned.”
8/3/2022
life after roe
life after roe
The Right to the Ballot and the Body
By Sarah Jones
Kansas shows why the anti-abortion movement has to win power by undemocratic means.
8/3/2022
early and often
early and often
5 Key Takeaways From the August 2 Primaries
By Ed Kilgore
In the Arizona, Kansas, Michigan, Missouri, and Washington primaries, Trump’s candidates did well, but there were also hopeful signs for Democrats.
8/3/2022
early and often
early and often
Shilling for Thrills
By Sarah Jones
In Lis Smith’s new memoir, principles are for purists.
8/3/2022
life after roe
life after roe
Kansas Voters Deliver Stunning Win for Abortion Rights
By Ed Kilgore
Strong turnout in the very red state shows pro-choice voters are willing to fight back, with big implications for abortion politics and the midterms.
8/3/2022
the city politic
the city politic
Jerry Nadler and Carolyn Maloney Really Hate Each Other
By Ross Barkan
The liberal lions of Manhattan fight off extinction.