After a day and a half of deliberation, a six-woman jury found George Zimmerman not guilty of second-degree murder or manslaughter in the death of Trayvon Martin. As you surely know, Zimmerman, a volunteer neighborhood watchman, shot and killed Martin in Sanford, Florida on the night of February 26, 2012 after following and getting into a fight with the unarmed 17-year-old, who was returning to his father’s girlfriend’s house from a trip to a nearby 7-11, where he purchased Skittles and a can of iced tea. Zimmerman argued that he acted in self defense.

Here is a CNN video of the verdict being read:

Update, 10:58 p.m.: Zimmerman and defense attorneys Don West and Lorna Truett after the verdict was read: 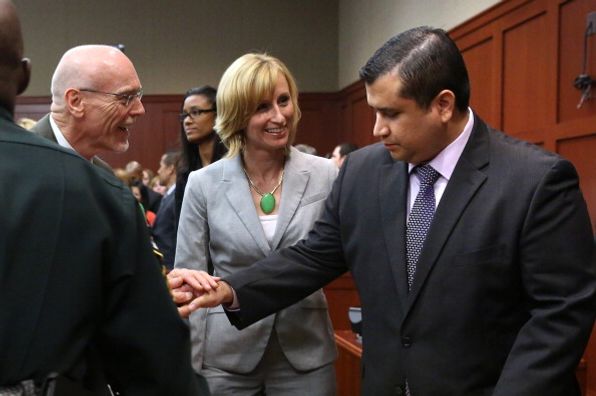 Update, 11:00 p.m.: Zimmerman’s defense attorneys, Mark O’Mara and Don West, just did a press conference. “I think the prosecution of George Zimmerman was disgraceful,” said West. “I am gratified by the jury’s verdict … I am thrilled that the jury kept this tragedy from becoming a travesty,” he added. “We appreciate the jury’s time and effort,” said O’Mara.”We’re ecstatic at the results.” Of Zimmerman’s reaction, he said, “He’s very, very happy with results … He’s doing good.” He also said, “This verdict still has nothing to do with civil rights. Civil rights has to be talked about, but not in relation to George Zimmerman … Nothing can bring back Trayvon Martin … It’s a tragedy. But, I’m not going to shy away from fact that evidence supported George Zimmerman did nothing wrong, he was battered and beaten by at 17-year-old.” Before leaving the podium, West said, “There’s no winners here. There’s no monsters here … You made Zimmerman into a monster.”

Update, 11:24 p.m.: “We respect the jury’s verdict, but it boils down to a kid minding his own business being followed by a stranger,” said prosecutor Bernie de la Rionda. Fellow prosecutor John Guy thanked the public for the “time and attention” given to the case. “We have from the beginning just prayed for the truth to come out, and for peace to be the result, and that continues to be our prayers, and we believe they have been answered.” Assistant state attorney Richard Mantei added, “I’d just like to say to the family of the dead teenager Trayvon Martin that I appreciate the way they’ve handled this matter. They’ve been dignified, they’ve showed class, they’ve kept their pain in check when they needed to, and they’ve grieved when they needed to … I know it can’t be easy. I know you all have a job to do, but keep them in mind too.”

Martin family lawyer Ben Crump also addressed reporters: “We are very saddened by the jury’s verdict. The family is heartbroken. Sabrina Fulton and Tracy Martin would like to thank people around the world for their support. To everybody that put their hoodies up. To everybody that said, ‘I am Trayvon.’ To Tracy and Sabrina, your tireless work. We know Trayvon is up there, proud. This morning, Martin Luther King’s daughter Tweeted me that this was a defining moment for the progress of her father’s dream. He would want us to conduct ourselves on the higher plane of dignity and discipline. For Trayvon to rest in peace, we must all be peaceful.”

Lord during my darkest hour I lean on you. You are all that I have. At the end of the day, GOD is still in (cont) http://t.co/enQjZ3bZk2

THE FEED
21 mins ago
what we know
what we know
At Least 15 Killed at Texas Elementary School: Officials
By Intelligencer Staff
On Tuesday afternoon, a gunman attacked Robb Elementary School in Uvalde, which serves the second through fourth grades.
4:00 p.m.
2022 midterms
2022 midterms
Republicans May Have Sabotaged Their Best Chance to Beat Whitmer
By Matt Stieb
Five GOP candidates for governor in Michigan — including the top two contenders — faked signatures to get their names on the ballot.
3:17 p.m.
adam neumann
adam neumann
Adam Neumann’s New Business Plan
By Kevin T. Dugan
The former WeWork CEO wants to get rich(er) by helping corporations appear more environmentally sustainable than they really are.