Google interns walk to their apartments at the Crescent Village apartment complex.

As Silicon Valley apartment complexes go, the Crescent Village in North San Jose is fairly normal. It’s got swimming pools, tennis courts, a fitness center, a gaming room, a 23-seat movie theater, and roughly 1,750 apartments, spread over five buildings, that rent for between $1,880 and $3,375 a month. Since it opened last year, it’s been a quiet place, filled with young families and busy commuters from nearby tech companies like Adobe and Cisco.

But that has changed this summer, as hundreds of Google’s summer interns moved into company-sponsored apartments in the complex and began disturbing the peace. Residents of Crescent Village are up in arms about the Google interns’ loud parties, late-night hot-tubbing sessions, and other un-neighborly behavior.

In previous years, Google — like most large tech companies —  gave its summer interns housing stipends and instructed them to find their own places to live. But this summer, they gave interns the option of living in shared apartments in Crescent Village, with rent paid for by the company. Google wouldn’t say how many of its interns took them up on the offer, but a closed Facebook group called “Crescent Village Google Interns” had nearly 400 members as of last weekend.

The Internship, a Vince Vaughn–Owen Wilson film that came out in June, depicts a Google internship as a nonstop parade of free food, cushy perks, and material comfort. It’s not far off. Google interns are paid roughly $6,000 a month, taken on luxury boat trips and outings to area museums, and given free laundry services, gym memberships, and dancing lessons. At night, many of them are shuttled back to their living quarters on cushy corporate buses. 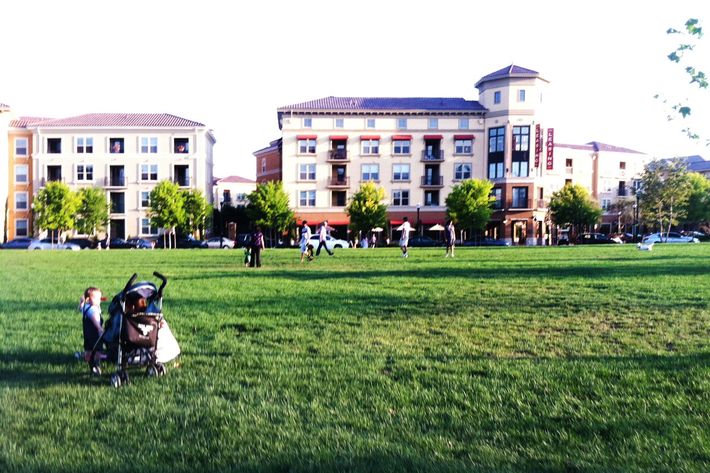 Residents of Crescent Village noticed the flood of incoming interns in June, but weren’t told who they were.

“At first I thought it was summer camp, but then I noticed that the kids were too old,” said Rochelle Fisher, a 46-year-old resident of the Tresoro building. Fisher lives in a top-floor apartment, which reduces the noise she hears at night, but said that her neighbors on lower floors had been complaining about loud parties and other “crazy” behavior from the Google interns.

“They dart out into the middle of the street,” she said. “They jaywalk all the time. I have to be very careful when I’m driving.”

The interns seem fond of Crescent Village. On Facebook and Google+, they’ve posted photos of parties, scenes of the pool and the large, open-air foyers to each building, and the interiors of their apartments, which are outfitted with two beds, spacious kitchens, and enough room to host a few friends. “Such a nice place,” wrote Joseph Choi, whose Facebook page lists him as a Google software engineering intern, on one photo. “And all paid for by Google!” 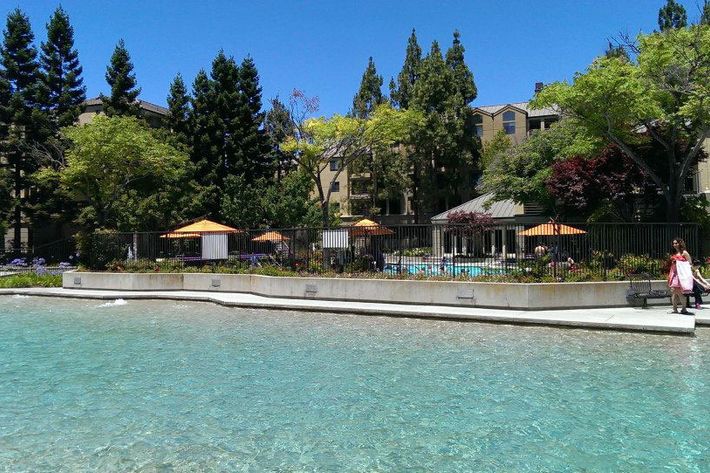 Residents of Crescent Village have been taking to Yelp to voice their frustrations with the Google interlopers. Resident Osborne R. wrote, “The situation is pretty bad. There are a lot of parties even in the middle of the week and security is unable to do anything.” Resident Huan L. wrote, “[It’s] like a dorm now. I could hear a lot of noise, people talking and singing even in the middle of the night. The sound-proof is pretty good if I close the windows, but it’s summer time, I want some fresh and cool air.”

Late last month, Crescent Village’s management placed a flyer in the doors of all complex tenants. The flyer reminded tenants to “be considerate of your neighbors” and “keep voices to a minimum,” and to avoid letting unaccompanied guests in the pool area. Google interns weren’t specifically mentioned, but Fisher says it was “written as if it were in response to a specific incident.” In recent weeks, one of the complex’s pools has been closed indefinitely, with no explanation given to residents.

A Crescent Village representative declined to comment about Google’s interns, saying, “We don’t talk about our tenants,” before hanging up abruptly. Google wouldn’t comment on what is happening in Crescent Village, but a spokesman said, “We’ve reminded our interns to be respectful of the community.”

That was several weeks ago. Several Crescent Village residents, who declined to be named, said the noise problems had improved somewhat of late. But they still wished for more peace and quiet, especially on weekdays. 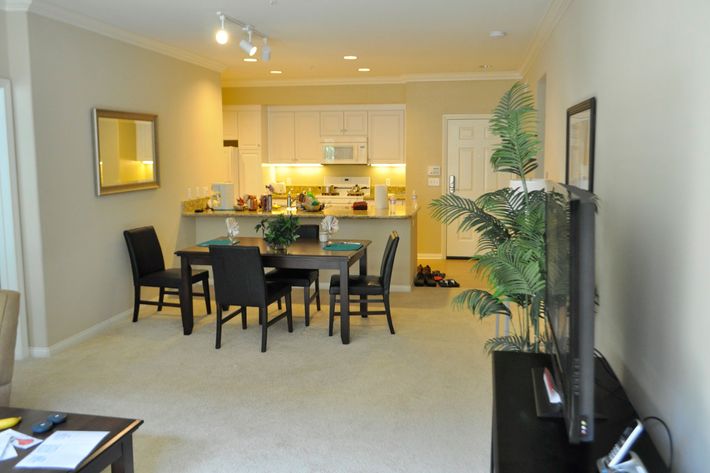 One afternoon last week, shortly after a charter bus had dropped off several dozen Google interns at the center of the complex, another tech intern who was waiting for his friend, a Google intern, on a bench outside the complex, said that he’d been to numerous events at Crescent Village in recent weeks, all “sort of normal college parties.” He said that Google interns frequently commandeer the in-ground hot tubs at night for parties.

A Google intern, seated by the pool at the Milano building, admitted that there have been “a lot of noise complaints” from neighbors. He said that his friends aren’t the partying type, but he wasn’t surprised that others were.

“You put a bunch of 20-year-olds in the same place, and what do you expect?”

+Comments Leave a Comment
Google Interns Are Terrorizing Their Neighbors