To mark the week that’s passed since George Zimmerman was acquitted of all charges in the death of 17-year-old Trayvon Martin, Reverend Al Sharpton’s National Action Network organized 101 “Justice for Trayvon” rallies in cities across the United States. The New York demonstration began at the National Action Network’s West 145th Street headquarters. Sharpton asked for federal charges against Zimmerman and echoed President Obama’s Friday call to reevaluate the “Stand Your Ground” laws that many believe motivated Zimmerman’s actions on the night he shot Martin. “We’re going to make sure there is an aggressive civil rights investigation,” he said, according to the New York Daily News. “We are trying to get justice, not get something off our chests … We are trying to change laws so that this never, ever happens again.” Martin’s mother, Sybrina Fulton, also addressed the crowd in Harlem. “We have moved on from the verdict,” she said. “Of course, we’re hurting. Of course we’re shocked and disappointed. But that just means we have to roll up our sleeves and fight.” She added, “Today it was my son. Tomorrow it might be yours.” 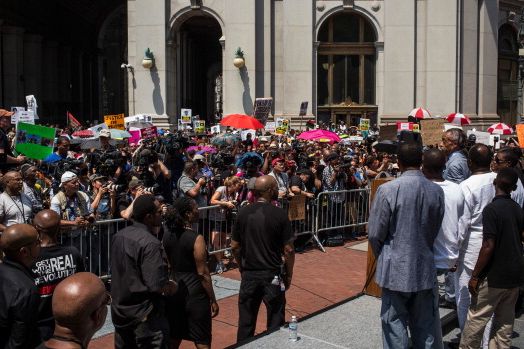 The rally continued at One Police Plaza, where Sharpton, Fulton, Martin’s brother Jahvaris, and hundreds of protesters were joined by Beyoncé (who on Friday encouraged her fans to sign a petition in support of Martin) and Jay-Z. (Supporters reportedly shouted, “No concerts in Florida!” to the couple as they walked by.) New York mayoral candidates Bill Thompson and Bill de Blasio also showed up for portions of the protest, as did comptroller hopefuls Eliot Spitzer and Scott Stringer.

Downtown, a tearful Fulton reiterated her pledge to continue to seek justice for her son to demonstrators waving signs reading, “I am Trayvon,” “Guilty for stalking and murder,” “I love my hoodie,” “Justice for all Americans,” and “Boycott Florida.” “I promise you I’m going to work for your children as well … Trayvon is not here to speak for himself,” she said, according to the New York Post. “Trayvon was a child, and I think sometimes it gets lost in the shuffle.”

Update: Meanwhile, Martin’s father, Tracy, appeared at a vigil in Miami. His statements were similar to those his ex-wife gave in New York: “I vowed to Trayvon, when he was lying in his casket, that I would use every ounce of energy in my body to seek justice for him. I will fight for Trayvon until the day I die. Not only will I fight for Trayvon, I will fight for your child as well,” he said.