A couple of months ago, in a jocular post about Germany, I blamed the Germans for starting World War I, prompting Matt Yglesias to threaten to start a debate about historical responsibility for World War I. I ignored the provocation, but Friday — the 99th anniversary of the assassination of the Archduke Franz Ferdinand, Yglesias went ahead and wrote his case absolving Germany. I initially hesitated, because I could well be sucked into an endless quagmire, and because my knowledge of the subject (I took one undergraduate course on the war) leaves me woefully underqualified to discuss it. Indeed, the spectacle of two political pundits trying to resolve a dense historical debate would probably, and not unjustifiably, cause historians who have devoted their lives to the topic to join the legions of old men calling to repeal the Internet.

Nonetheless, an occasion like the 99th anniversary of the start of the war only comes along every hundred years or so, and since there’s no news today, and allowing Yglesias’s provocations to go unanswered runs the risk of making me appear weak, with all caveats about my lack of relevant expertise, here goes.

The question of who to blame for the war has bounced back and forth. The United States entered the war in a fit of moralistic fervor over bloodthirsty German militarism. Opinion swung back in the opposite direction in the disillusionment that followed the war, which isolationists attributed to British propaganda and nefarious lobbying by war profiteers. Then, after the second World War, people decided maybe there was something to this bloodthirsty-German-militarism thing. The continued relevance of the debate tracks the divide between hawks and doves, of which I am more the former and Yglesias is very much the latter. For the doves, World War I is yet another case in which deluded moralism led the country into a stupid war.

It’s certainly true that Germany did not start World War I in anything like the way it started World War II. If the rest of Europe was as desperate to avoid war in 1914 as it was 25 years later, it could have avoided war. Still, I’d defend the view that Germany deserves most, if not all, the blame.

But there really was one factor that turned a localized dispute into a general European war, and that was the German military plan.

Germany’s military understood that it could not hope to win a two-front war against both France and Russia. Its response, originally conceived by count Alfred von Schlieffen in 1905 and fine-tuned in the years leading up to the war, hinged on a meticulously planned series of maneuvers. The plan assumed Russia would take weeks to mobilize its army and could be held off with a tiny defensive force in the east. Germany would launch a huge surprise offensive through Belgium, circling wide around the French Army, capturing Paris, and knocking France out of the war within six weeks. Then, by the time Russia got its act together, Germany could reroute its army back to the east. 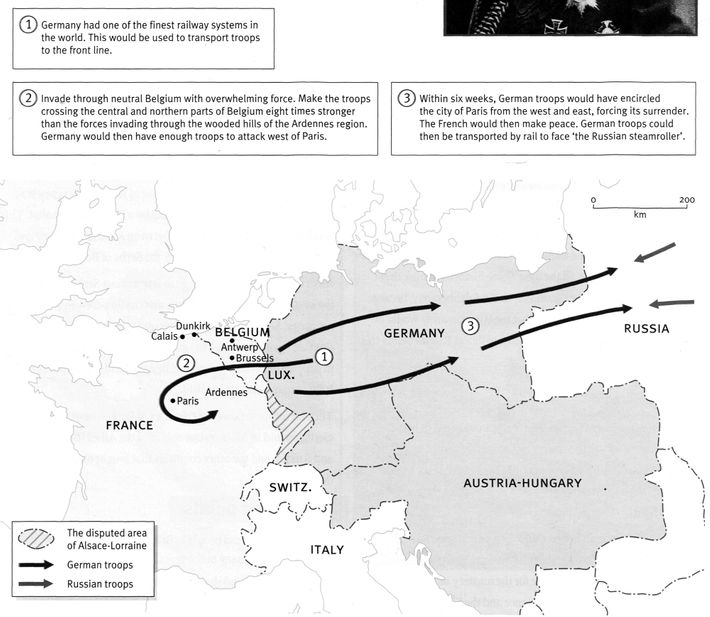 There’s a long historical debate over whether the Schlieffen Plan could have worked or whether Germany followed it faithfully enough, which is not my point. The important thing is that the Schlieffen Plan made Germany very eager to start the war. The whole point of the plan was that it was Germany’s only chance to avoid a doomed two-front war, and it hinged on intricate timing, planned out down to every last train car.

But the Serbian crisis started the clock on the plan in a way Germany hadn’t expected. When Austria-Hungary threatened Serbia, Russia mobilized its army. Since the Schlieffen Plan assumed Russia would not have mobilized its army yet, every day that went by put the German war plan further behind schedule and made the war harder to win. All the participants had reasons to go to war, but Germany was the only one that needed the war to start now now now and made it impossible to stop a Balkan crisis from turning into a world war.

What’s more, the German war plan casually treated Belgium as a highway for the German army rather than as a neutral country that would very much like not to be invaded. The British had a treaty dating to 1839 promising to defend Belgium from invasion, but the Germans never accounted for the possibility that invading Belgium would trigger Britain to join the allies. (Some argue that the original Schlieffen Plan did account for this but figured France would send troops into Belgium first, allowing Germany to invade scot-free.)

Germany’s war plan may not have been a Hitler-style drive for conquest, but it was worse than a mere blunder. Germany assumed it had to strike first, and likewise assumed it could treat neighboring countries like a Risk board. So, yeah — go ahead and blame the Germans.