Today, Facebook may make news by nudging its closing stock price over $38 a share for the first time since it went public. If it does, you’ll hear dramatic stories of the company’s back-from-the-brink recovery, hosannas to Facebook COO Sheryl Sandberg (who is credited with much of the turnaround), and appraisals of Facebook’s vaunted new revenue models — the various ways it’s learned to make money by selling new kinds of ads, both on its mobile and desktop versions.

The stories about the revival of Facebook — whose shares fell as low as $18 last summer — will be very dramatic, with the flavor of a fourth-quarter, come-from-behind victory. But the reality is that Facebook was never in dire straits. In fact, it may never come close to failure — at least not in the way we think.

People who write and talk about Facebook for a living tend to ask a certain type of question about the company’s future: How well is Facebook monetizing? How is its mobile strategy working? What kinds of market penetration is it getting in the developing world? These questions are important to figuring out how Facebook is adapting to change, and how that adaptation is likely to translate into dollars.

But here is a figure that is also pretty important, insofar as Facebook’s future is concerned: 1.15 billion. That’s the number of users Facebook currently has. Nearly a billion of them log in every day. And that enormous user base — which amounts to roughly half of the world’s Internet-using population — gives Facebook a huge margin of error. Too-big-to-fail Wall Street banks can’t collapse because they’re too intertwined with counterparties. Facebook can’t collapse because it’s too intertwined with our psyches.

Why? Because Facebook has managed to become something that few Internet companies ever have: a truly inescapable service. If you’re reading this, you’re probably a Facebook member. Among those 1.15 billion others are your friends, parents, college classmates, colleagues, and dating prospects. You may not always like Facebook. You may complain about how new ads have gummed up your Newsfeed or how the site cooperates with the NSA’s data-gathering efforts. But you’re probably not going to quit Facebook, because it would cut you off from the people you know. Even though a sleeker, better-designed social network could come along tomorrow — one that surpassed Facebook in every conceivable way — the network effect means that you’ll probably stick around. Put simply, Facebook has a billion-user head start on anything that could potentially steal its thunder. Even if nobody ever joined Facebook again, it would still be the largest social network in the world for years.

Each year, we’re told that something is going to cut into Facebook’s market share. Path will steal users who are concerned about privacy. Instagram and Snapchat will appeal more to teens. A Guardian article from earlier this year, “Facebook loses millions of users as biggest markets peak,” listed all the many reasons that Facebook was likely to wither on the vine. And yet, in the most recent earnings report, we learned that Facebook has actually added about 40 million users in the last 90 days — the equivalent of getting the entire state of California onboard. What Facebook’s doomsayers miss is that most people don’t choose social networks primarily based on features — they choose the ones their friends are already on. And no matter where you live (with a few exceptions, like mainland China), the largest share of your friends are on Facebook.

Eventually, Facebook will run out of new members to sign up. Professional analysts say this like it’s a bad thing. But it will be tremendous for the company. Imagine an entire world hooked on your product. Imagine how difficult it would be to leave a truly global Facebook. Right now, in some corners of the world, it’s a social statement not to have a Facebook account — akin to not having a cell phone. If Facebook achieves the kind of global ubiquity it wants to (and it will), not being part of the Facebook crowd will be like not having a mailing address.

For years now, investors and pundits have agreed that Facebook’s biggest challenge is making money through advertisements, especially on mobile. It’s a high-wire act, right? Too many ads on users’ Newsfeeds, and they’ll flee. Too few, and the company will become one of those sad modern Internet phenomena — the one with boatloads of users but no revenue.

The truth is, though, that Facebook could double, triple, or quadruple the number of ads on the site, and very few of its members would be annoyed to the point of quitting. As Alexis Madrigal said yesterday, Facebook is a nearly physical addiction, one that has become an almost instinctual part of life for most members. And as the below chart, contained in Madrigal’s piece, shows, Facebook simply dwarfs other social networks when it comes to where people spend their time. 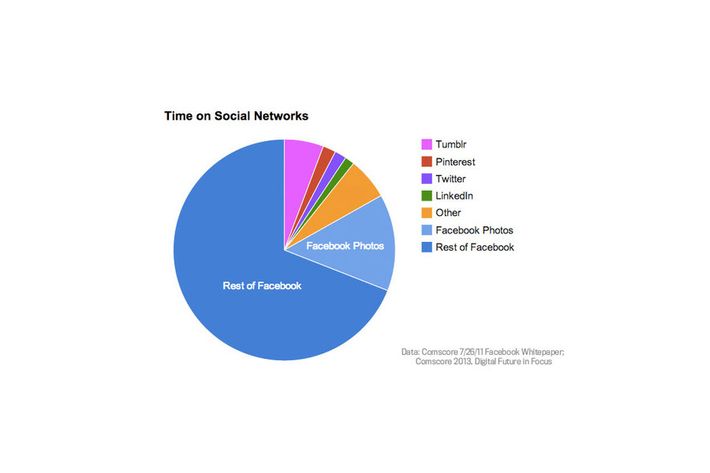 To say that Facebook is too big to fail isn’t to say that it will last forever, or that it doesn’t have to try to improve. The annals of web history are littered with the corpses of indispensable services. (At one point a decade ago, it probably seemed like AOL was a permanent fixture of Internet life.) And Facebook, as a public company, does have to make clear to investors every quarter that it has a plan for continuing to make money and fending off competition. A crucial strategy mistake — a dumb, expensive acquisition, for example, or a decision to charge a monthly fee for membership — could still hobble the company.

But the decline won’t come from the consumer-demand side, despite the histrionics of tech watchers and Wall Street analysts. And Facebook-watchers should focus on the captive audience the company has, rather than the advertisers it’s courting. In a perfect world, Facebook’s most recent quarterly statement would have consisted of just two sentences: “We have 1.15 billion users. They’re not going anywhere fast.”