Not pictured: Anyone who will face charges for the London Whale scandal. Photo: Saul Loeb/AFP/Getty Images

For most of its sixteen-month life as a major financial news story, the “London Whale” trading-loss saga at J.P. Morgan has had one primary antihero: Bruno Iksil, the Whale himself.

As the guy who made a massive credit bet that ultimately lost his employer $6 billion and caused a major PR headache for the bank, Iksil has rightly been seen as the center of the scandal, and the person easiest to implicate in its wake. After all, he did the trades, he spearheaded the risk-model coverup that allowed the scandal to grow to massive proportions, and he took the fall when it went sour. Everyone else is a supporting cast member.

So it’s a bit confusing that although two of Iksil’s former colleagues were charged by federal prosecutors this morning, Iksil himself will face no charges for his role in he mess. The reason is simple: He agreed to snitch.

The Journal has the details on Iksil’s slippery exit:

Prosecutors are expected to charge Javier Martin-Artajo, a Spaniard who led the team that made the disastrous trades, and Julien Grout, a Frenchman responsible for recording and distributing daily values on the group’s positions. They don’t, however, plan to bring charges against Bruno Iksil, who made the wagers that earned him the nickname, according to a person close to the situation … The decision not to prosecute Mr. Iksil suggests the former trader has emerged as an important witness.

This is kind of nuts! As a reminder, the relevant part of the J.P. Morgan org chart during the London Whale fiasco looked something like this. (I’ve labeled the people who are reportedly going to face charges in red, the others in blue.) 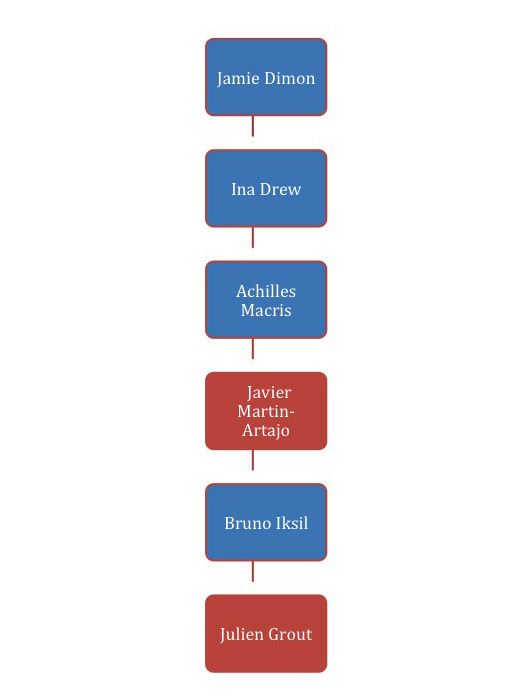 Some of those blue boxes are probably rightly blue. For example, you could make a solid case for CEO Jamie Dimon’s innocence. As subsequent investigations have shown, he basically had no idea what was going on inside the bank’s chief investment office — where the Whale plied his trade — until it was too late to stop it. You could also argue that Ina Drew, the former head of the bank’s chief investment office, shouldn’t face charges either, since she was essentially lied to by the traders working underneath her, then did all she could to rein in the losses once she found out what was going on. (Of course, in a perfect “buck stops here” world, Dimon and Drew would be prone to “failure to supervise” charges, but that’s another matter.)

So, okay, let’s assume only the bottom four traders knew the ins and outs of the London Whale’s bad bets. It is truly bizarre that of these four, only two are being charged criminally. According to the best evidence we have (the Senate PSI report, and J.P. Morgan’s internal task force report), all four were directly involved in the $6 billion gamble. All four knew the Whale’s structured credit portfolio was headed for big losses, all four conspired to hide that fact from their bosses for as long as possible via a custom-made VaR model and fudged marks, and all four were relieved of their duties as a result of the blowup.

Macris and Iksil — the two who are apparently dodging charges — were no less involved than their colleagues in what happened with the London Whale, according to everything we know about the case. Macris was the boss who oversaw the creation of the Whale’s massive portfolio, and approved of its maneuvers at every step. And Iksil, you know, was the Whale. He did the trades! He presented the faulty risk model that masked the size of his losses! (To quote just one of many passages in the PSI report about his involvement: “Mr. Iksil’s presentation indicated that as of mid-January, implementing the CIO’s shadow [risk] model would have had the effect of reducing the [big trade]’s apparent [risk] by almost 50%.”) And, according to the WSJ’s sources, he was even responsible for the bad marks — he “was the one who placed the daily values on the positions, and he often told Mr. Grout what numbers to use.”

Iksil displayed some doubt and contrition near the end of the Whale episode, but that doesn’t alter the fact that if anyone was involved in masking the size and performance of Iksil’s bets, it was Iksil. And yet, because he was willing to turn over “evidence about internal communications at the bank as losses mounted,” it appears he’ll swim free.

That probably won’t sit well with people who wanted Iksil — or better yet, Dimon or Drew — to go down for the Whale scandal. People like to see those furthest up the ladder take a fall, which is why, during the trial of former Goldman Sachs mortgage underling Fabrice “Fabulous Fab” Tourre, several people complained that prosecutors had gone after a low-level trader, instead of the Goldman executives who supervised him or the CEOs and chairmen who went unpunished after the financial crisis.

But it’s hard to bring a case when you don’t have corroborating witnesses. On Wall Street, where few crimes take place in broad daylight, that often amounts to needing someone on the inside to testify. Iksil was willing to turn on his colleagues, and he’s being rewarded lavishly for it.

The fact that he’s being rewarded with complete immunity (by both the DOJ and the SEC), rather than just promises of leniency, shows what a premium authorities place on cooperation in financial fraud cases. They’re so eager to nail someone for high-profile Wall Street wrongdoings that they’ll even let the people after which those wrongdoings are named go free, as long as they’ll willing to provide more iron-clad evidence against their colleagues.

I’m guessing that, given the strength of Iksil’s evidence, prosecutors felt they could more easily win a case against Martin-Artajo and Grout than Iksil himself, which is why they sought his cooperation first. That might make sense, if the goal is simply getting convictions. But the DOJ and SEC’s desperation in the London Whale case sets a troubling precedent for future criminal investigations on Wall Street. It turns out that you can commit plenty of sins on your own, as long as you have better dirt on your co-workers.