Following the news of actress Famke Janssen’s unsettling Greenwich Village home invasion, in which a copy of the 1957 children’s book The Lonely Doll was placed near her bed, the story can’t help but take on a new eeriness. In the author and photographer Dare Wright’s tale, the lonely doll Edith is visited by two bears who keep her company: “Just wait and see what fun we’ll have!” one whispers in Edith’s ear. The line is not as cute when one imagines it coming from a stalker.

But Wright’s only living heir and the owner of her estate doesn’t want people to get the wrong idea. “My Google Alert is just going nuts,” Brook Ashley, who considered Wright her “surrogate mother,” told Daily Intelligencer today. “But I want to separate the crime from the book.”

The story and its author are already objects of off-beat and slightly morose cult fascination: Edith was named after Wright’s mother, a famous painter, who gave her the toy, while the bears are thought to represent Wright’s brother and father, who were not around during her childhood. Even as an adult, Wright dressed the doll to look like her and photographed it in a variety of situations. “I grew up with Edith” — the doll — “as a sister almost,” said Ashley. (In the book, there’s also a bear-on-doll spanking involved, to which Ashley said, “It was the fifties!”) 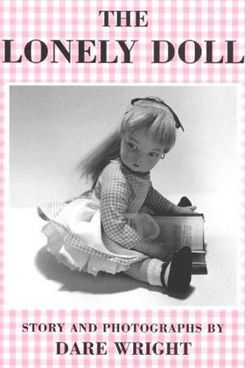 As for Janssen’s unwanted houseguest, “Perhaps the person who left it there is saying, ‘I can be your friend, too. Let me into your lonely life the way Edith let the two bears into hers.’ That is creepy! Not the book, but the offering,” said Ashley. “That’s the most logical interpretation, but it is disquieting,” she said. “Why The Lonely Doll? This is like a Castle episode or something.”

But unlike The Catcher in the Rye’s unfortunate connection to assassinations, Ashley insisted, “This is just a quirky little incident. I would prefer people not pick up the book and say the cover’s creepy. It’s a doll reading a book! I think the book stands on its own, and its reputation isn’t going to be harmed by this. We’re about to start filming a documentary about Dare’s life, and that will definitely take first place in Google over this.”

If she could speak to Janssen, “I would say I hope she reads it at some point to see it’s not terrifying,” said Ashley. “No one left a Stephen King book.”

“I wonder if it was the first edition, which is quite valuable,” she added. “I guess it’s sitting in a police evidence locker right now.”

THE FEED
26 mins ago
what we know
what we know
U.S. Shoots Down China’s Balloon: Updates
By Chas Danner
“We’re gonna take care of it” President Biden told reporters earlier Saturday.
8:00 a.m.
early and often
early and often
Has Pete Buttigieg’s Dream Job Turned Into a Nightmare?
By Ed Kilgore
It turns out Transportation secretary won’t be a quick and easy layover on the way to higher office for Mayor Pete.
2/4/2023
early and often
early and often
The Democrat Who Could Take Down Kyrsten Sinema
By Ben Jacobs
Ruben Gallego will try to fulfill the left’s dreams by challenging Arizona’s newly independent U.S. senator.