Most Introductory Applause: Christine Quinn, who later clarified that the audience was clapping for her dad because it’s his birthday, and somehow everybody knew that?

Candidates Who Are Pro- Keeping Hospitals Open: All of them, incredibly.

Number of Susan Sarandon References: One. Christine Quinn said that Sarandon, a Bill de Blasio supporter who does not vote based on vaginas, helped to kill St. Vincent’s hospital.

Best Completely Unprovoked Personal Attack: “I’ve put together a tax reform that will ask those who make over $500,000 a year — the one percenters, such as Bill Thompson — to pay a little bit more.” — John Liu.

Most Frequent Use of Emphatic Hand Gestures: Bill Thompson, who punctuates every single word with an emphatic hand gesture. 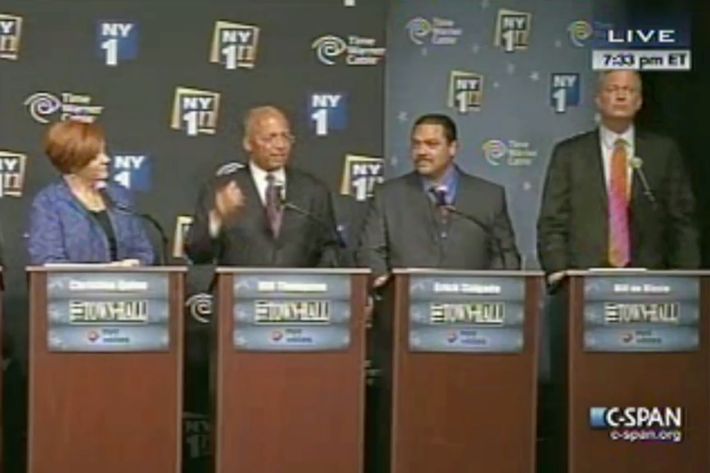 Loudest Audience Member: The heckler who, referring to Christine Quinn, screamed, “She closed St. Vincent’s hospital!” long after the debate over saving hospitals had wrapped up. The heckler turned out to be marginal mayoral candidate Randy Credico. 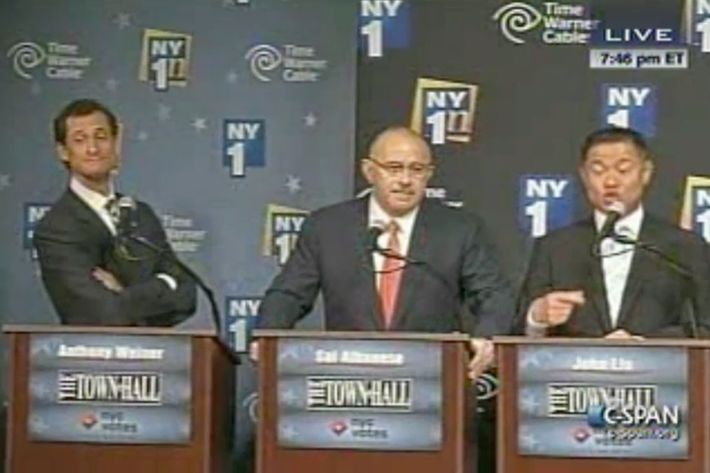 Most Whining About Speaking Time by Candidates Polling at One Percent and Who Should Frankly Just Be Happy They Were Invited to the Debate at All: Sal Albanese and Erick Salgado (tie).

Biggest Flip-Flop: Bill Thompson said that while tax increases would be a last resort, they “aren’t off the table.” Thompson had previously claimed, very adamantly, that he would never raise taxes as mayor. As the Times reported in January:

Asked by reporters later whether he was offering a “read my lips” pledge for the city, Mr. Thompson said yes — and repeated it five times over five minutes.

“Let me just be blunt, so there’s no misunderstanding: I’m not raising taxes,” said Mr. Thompson, who lost to Michael R. Bloomberg in the 2009 mayoral election.

Biggest Overstatement About an Overstatement: “The notion that this city is even ready for a stiff wind right now is overstated.” — Anthony Weiner exaggerating about the present state of the city’s hurricane preparedness.

Amount of Time the Debate Spent on Stop-and-Frisk: A lot.

Substantive Difference Between the Viable Candidates on Stop-and-Frisk: Not a lot.

Worst Play for the Cornell Vote: “For example, Cornell coming here, it’s terrific. But I’m gonna lose a minute’s sleep, let me tell you, over that first Cornell graduating class, they’re gonna be fine. But the CUNY students, I do lose sleep over their future.” — Christine Quinn, referring to Cornell’s tech campus on Roosevelt Island.

Best Pitch for the Alcoholic Vote: All the candidates (except Erick Salgado) said it should be legal to drink a beer on your stoop, but Anthony Weiner said that New Yorkers should also be able to drink on the beach and in parks.

Best Alley-Oop: Christine Quinn using her “ask a fellow candidate a question” question to ask Bill Thompson if he was satisfied with Bill de Blasio’s answer to his question. Bill Thompson was not satisfied.

Worst Sports Metaphor: “Errol, in professional wrestling they allow tag teams, so if we’re going to do that here…” — Bill de Blasio, who obviously should have said alley-oop instead of tag team #teamalley-oop.

Worst Alley-Oop: Anthony Weiner trying to alley-oop to Christine Quinn for another slam in Bill de Blasio’s face, but Quinn wasn’t feeling it, and Weiner and Quinn just ended up arguing for a bit.

Best Defense-by-Technicality: Sal Albanese claimed that two Bill de Blasio staffers tweeted, “kill the police.” Bill de Blasio countered Albanese had his facts wrong, which is true, but just barely. One staffer tweeted “Kill the police” (along with a bunch of anti-semitic things). Another staffer tweeted “Fuck the police” (totally different!) and declared that she was kind of “rooting” for Christopher Dorner.

Candidates Who Have Been to a Baseball Game This Season: Christine Quinn, John Liu (not major league).

Candidates Who Think the City Needs More Surveillance Cameras: Everyone except Anthony Weiner.

Most Controversial Claim About Slavery: “Slavery has not been abolished, slavery has been transferred to my people.” — Erick Salgado, referring to Hispanics.

Number of Times the Weiner Sexting Scandal Was Implicitly Addressed: Once. During a “lightning round” question about whether the candidates had ever texted while driving, Anthony Weiner answered yes, and prolonged tittering occurred.

Most Group Dodges on One Lightning Round Question: When Errol Louis asked the candidates which other city they would want to be mayor of if they had to choose. Only Sal Albanese actually named another city (Chicago).

Amount of Time It Took Bill de Blasio to Utter the Phrase “Tale of Two Cities” a Second Time : 80 minutes.