Tonight, the Democratic mayoral candidates faced off in their first broadcast television debate. (This is in addition to approximately 2,000 non-televised candidate forums.) Here are the highs, the lows, the smackdowns, and the clenched jaws.

Amount of Time Candidates Spoke After Being Instructed to Give an Opening Statement of “Exactly 30 Seconds”:

Time Until Bill de Blasio Said the Phrase “A Tale of Two Cities” a Second Time: Two minutes and 51 seconds

Where the Candidates Stand on Stop-and-Frisk:

Anthony Weiner: “Too many people are being stopped who did nothing wrong.”

Bill de Blasio: “We need a ban on racial profiling, we need that to be a matter of city law.”

Time Until the First Mention of the Weiner Scandal: Ten minutes and 20 seconds.

What Grade the Candidates Would Give Mayor Bloomberg’s Third Term:

Gutless Candidates Who Refused to Give Mayor Bloomberg a Grade:

Christine Quinn (“I think a question like this is too complicated to boil down into just a letter grade.”)

Bill Thompson, because Bloomberg shouldn’t have had a third term to begin with.

Anthony Weiner (“I’m not sure how important my grade would be, but I ask those struggling in the middle class … “)

6. Quinn slams de Blasio for criticizing her for wanting to keep Ray Kelly as police commissioner, when he wants to appoint Kelly’s second in command.

5. Weiner telling Thompson that you didn’t run for mayor in 2005 because you “didn’t want to take me on.”

4. Weiner says Quinn supported Mayor Bloomberg’s bid for a third term because she “didn’t believe that she was up to the job.”

3. Quinn points out that Weiner, who had casted his competitors as insidery politicians, would be a politician himself if he hadn’t resigned in disgrace (for the penis thing!)

2. Weiner claims that de Blasio is different than Quinn only because Quinn has been “more successful” and de Blasio has “never gotten over” that she was elected to City Council speaker.

1. Quinn proclaims that Anthony Weiner has no right to ask anyone to apologize for anything, ever. (Because of the penis thing!)

Most Clenched Jaw: Anthony Weiner’s jaw when Christine Quinn was saying that. 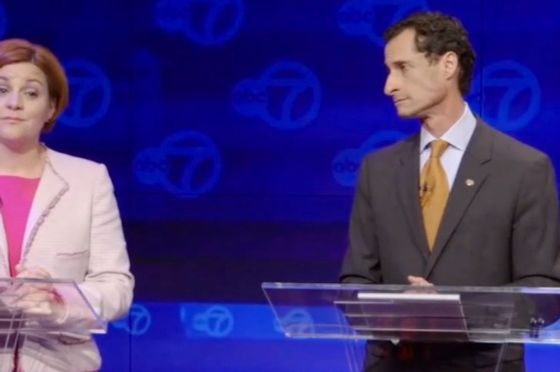 The Most Boring Responses to the “Name One Thing That Would Surprise New Yorkers About You” Question, in Ascending Order of Boringness:

John Liu: “I like to surf, I like to ski, snowboard, and skateboard. And for some reason, some guy got a video of me skateboarding just a few days ago, so that secret’s out.”

Anthony Weiner: “That after midnight on Monday nights, I play ice hockey. I’m probably the only 130-pound Jewish kid in the city that does that, but that’s what I do.”

Chistine Quinn: “I am not a natural redhead. Maybe actually that I was my college mascot, I was a fighting rooster.”

Bill de Blasio: “I went to high school with Patrick Ewing, but he made it to the NBA and I didn’t.”

Candidates Who Apparently Weigh the Same Amount as a Newborn Giraffe: Anthony Weiner.

Worst Canned Line: “Are we in a mayoral debate or are we in the Twilight Zone?” — John Liu

Most Meaningless Platitude: “This campaign isn’t about me, and really is not about anyone on stage, it’s about you.” — Anthony Weiner. Okay, but it’s also about … the candidates.

THE FEED
18 mins ago
the national interest
the national interest
Joe Biden’s Best Week Ever
By Jonathan Chait
His presidency is suddenly shaping up to be a resounding success.
8/11/2022
what we know
what we know
Jan. 6 Protestor Accused of Attacking FBI Office in Cincinnati
By Intelligencer Staff
The suspect, who was killed in a police shoot-out, was reportedly at the Capitol on January 6.
8/11/2022
early and often
early and often
The Bad News for Democrats on Crime and Immigration
By Ed Kilgore
Pollster Stan Greenberg says the midterm landscape has improved for Democrats, but they need to find more credible positions on certain issues.

8/11/2022
early and often
early and often
Justice Department Moves to Show the Public the Trump Search Warrant
By Justin Miller
Attorney General Merrick Garland calls Donald Trump’s bluff regarding the FBI’s search of Mar-a-Lago.
8/11/2022
what we know
what we know
Trump’s Mar-a-Lago Raided by FBI: Everything We’ve Learned
By Intelligencer Staff
DOJ reportedly got a tip that Trump was still holding classified documents, and they were “so sensitive” that officials felt they had to act.
8/11/2022
the national interest
the national interest
Wall Street Journal Columnist Says Presidential Houses Are Free-Crime Zones
By Jonathan Chait
The most persuasive defense of Trump yet.
8/11/2022
life after roe
life after roe
The Anti-Abortion Movement’s Divisions Suddenly Have Huge Consequences
By Ed Kilgore
Fights over rape-incest exceptions and when exactly life begins are in danger of undermining already low popular support for abortion bans.
8/11/2022
what is elon musk?
what is elon musk?
‘I Don’t Talk to Any of My Normal Friends About This’
By Alex Yablon
Two members of Elon Musk’s Twitter army explain their decision to enlist.
8/11/2022
what is elon musk?
what is elon musk?
‘I Began Just Losing Money Every Day’
By Jen Wieczner
Four short sellers on the specific agonies of betting against Elon Musk.
8/10/2022
life after roe
life after roe
Abortion-Rights Fight Finally Gives Kamala Harris a Chance to Lead
By Ed Kilgore
After being assigned several no-win tasks, the veep is emerging as the White House’s biggest champion on the crucial issue of reproductive rights.
8/10/2022
just asking questions
just asking questions
‘You Can’t Play the Cable-News Game in Court’
By Benjamin Hart
National security lawyer Bradley P. Moss on the seriousness of Trump’s predicament and the unseriousness of his lawyers.
8/10/2022
early and often
early and often
Trump Scores More Primary Wins While Basking in GOP Support
By Ed Kilgore
The ex-president got more post-raid consolation with wins by his candidates in Connecticut and Wisconsin, plus the loss of another impeachment backer.
8/10/2022
early and often
early and often
2022 Midterms: A Guide to the Races Worth Watching
By Ed Kilgore
A cheat sheet to keep track of all the crucial races, primary upsets, and campaign drama — Trump-fueled and otherwise — from now through Election Day.
8/10/2022
early and often
early and often
Trump, Who Once Said ‘the Mob Takes the Fifth,’ Takes the Fifth
By Margaret Hartmann
The former president says he has finally learned about the value of the Fifth Amendment after repeatedly mocking people who invoke it.
8/10/2022
early and often
early and often
The Heir to Bernie?
By Ross Barkan
The career of America’s leading socialist has to end at some point, and he might have a worthy successor in Vermont’s own Becca Balint.
8/10/2022
the money game
the money game
Pretty Soon You’ll Be Able to Afford Things Again
By Kevin T. Dugan
July’s inflation rate saw an unexpectedly large drop, driven by the price of gas. This could be the beginning of the end of the era of high prices.
8/10/2022
the city politic
the city politic
Dan Goldman on the Problem With Trump, Republicans, and Members of His Own Party
By Nia Prater
The veteran federal prosecutor tries politics.
8/10/2022
what is elon musk?
what is elon musk?
SpaceXCadets
By Sarah Jones
If you want your child to become the next billionaire industrialist, Astra Nova might be a good place to start.
8/10/2022
what is elon musk?
what is elon musk?
Musk As Muse
By Fran Hoepfner
Elon’s romantic partners keep putting him into their art.
8/9/2022
2022 midterms
2022 midterms
Senate Control Could Come Down to a Georgia Runoff Once Again
By Ed Kilgore
If neither Raphael Warnock nor Herschel Walker wins a majority in November, which looks plausible, they’ll face off in a December runoff.
8/9/2022
crime
crime
Police Arrest Suspect in Killings of Muslim Men in Albuquerque
By Benjamin Hart and Nia Prater
At least three Muslim immigrants have been ambushed and killed in recent weeks, terrifying the local community.
8/9/2022
exhibit a
exhibit a
Making Sense of the Trump Raid
By Ankush Khardori
After a summer of intense criticism, Merrick Garland’s Justice Department takes its boldest step yet in pursuit of the former president.
8/9/2022
the power trip
the power trip
What’s in Trump’s Safe the FBI Raided?
By Olivia Nuzzi
Former aides consider the contents of the vault at Mar-a-Lago.
8/9/2022
mar-a-lago raid
mar-a-lago raid
Convicted Felons Are Leaping to Trump’s Defense
By Matt Stieb
Fellow politicians and operatives who also had run-ins with the Feds are claiming him as one of their own.
8/9/2022
the national interest
the national interest
What Is Really Unprecedented Is Trump’s Criminality
By Jonathan Chait
Republicans are angry at the FBI, but they choose to yoke themselves to a flagrant crook.