The Washington Post’s lead Sunday news story is one of the weirdest, and most weirdly biased, news articles I’ve ever read in my life. The point of the story — headlined “After six budget showdowns, big government is mostly unchanged” — is that the federal government is too big, and we may think it’s getting smaller, but it’s not, really.

There are actually two points to the story. One is that government is not shrinking, or at least not shrinking very quickly. This point is clearly false. The author employs crude, badly deployed statistics, such as the shocking fact that the government is now spending $3.455 trillion a year, which is admittedly lower than in 2010, but “it is not down by that much. Back then, the government spent a whopping $3.457 trillion.”

Is that really “not down by much”? Given that some growth is required every year merely to keep pace with higher costs and a growing population, a cut in unadjusted dollar terms over three years is actually a lot. Government spending has actually dropped by 2 percentage points of gross domestic product since 2010. That’s a very fast drop, especially given the backdrop of an economy coping with the vast fallout from the largest economic crisis since the Great Depression. Indeed, the consensus of the macroeconomic forecasting field is that rapid government cutbacks are hampering the recovery, and thus prolonging the enormous human misery of high unemployment, though that consensus does not appear anywhere in the story.

The story proceeds to report that the federal workforce is not shrinking by much:

Measured another way — not in dollars, but in people — the government has about 4.1 million employees today, military and civilian. That’s more than the populations of 24 states. 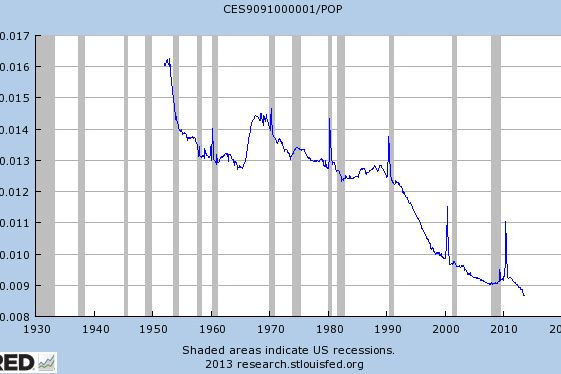 So the first point, that government is not shrinking quickly, is wrong. The second point of the story is not a factual one but an opinion: Government is just really, really big. The article bolsters this opinion by describing the size of government with a series of adjectives (“big,” “whopping,” “the government still spends a vast amount of money,” etc.). Of course, whether you consider the government too big or too small is a matter of opinion. It’s odd that a news article would attempt to factually settle what is essentially a debate over values and preferences. 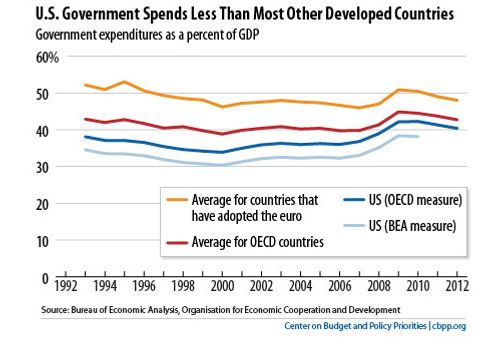 Again, as a point of view, it’s perfectly legitimate to believe that the federal government is too big and that the governments of all advanced countries are too big. But the Post’s particular article seems almost designed to decrease the audience’s understanding of the federal budget.