In the past few years, social media has increasingly played a role in conflicts throughout the world, but how to respond when your nation is taunted by a foreign leader’s child on Facebook isn’t something we’d considered. “Ignore it” is probably the most obvious answer. Instead, the New York Times blog The Lede has opted to analyze whether the post in question was actually written by Syrian President Bashar al-Assad’s 11-year-old son, Hafez, or someone else who wants the U.S.“to attack sooo much, because I want them to make this huge mistake of beginning something that they don’t know the end of it.”

The paper admits it’s “impossible to confirm” whether the account belongs to Hafez, but notes that several of the “likes” and comments on the post can be traced to seemingly authentic accounts from children and grandchildren of senior figures in Assad’s administration. On the other hand, the account says Hafez is a graduate of Oxford University and plays for a Barcelona soccer team, “neither of which would be likely to appear on the résumé of an 11-year-old boy in Damascus.”

Even if the post is fake, the Times suggests it “appears to illustrate the mindset of Mr. Assad’s core supporters,” and “Judging from the post, supporters of Mr. Assad do not appear to be particularly afraid of the United States.” Judging from the post’s references to the 2006 war between Israel and Hezbollah, if we want to launch an appropriate response to this Facebook trash talk, America’s 11-year-olds are going to need crash course in Middle Eastern history. 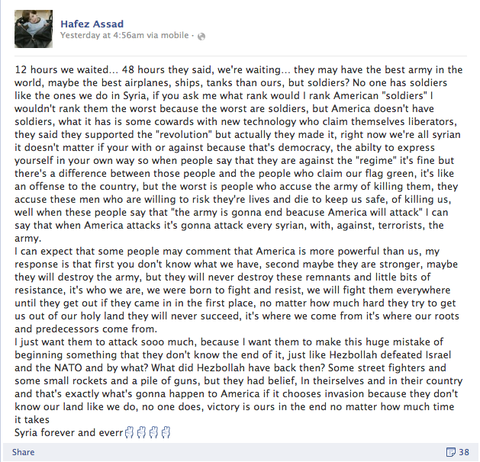