The Islanders practice at their future home in Brooklyn. Photo: Joe DeLessio

In 2015, the Islanders will leave Nassau County for Brooklyn’s Barclays Center. But because the arena was designed with basketball and the Nets in mind, it requires a funky configuration to accommodate a 200-foot-long hockey rink. Fans haven’t gotten an up-close look at the Barclays rink in action yet: A scheduled 2012 preseason game between the Islanders and Devils never happened because of the NHL lockout, and plans to host KHL games in the arena in January were scrapped as well. Until now we had to make do with the occasional Instagrammed photo of the rink in place, but with the Islanders set to play the Devils in a preseason game on September 21, Barclays unveiled its hockey configuration to the media earlier today.

The most immediately apparent thing about the configuration is its asymmetry. The east end of the building is set up like any other modern arena, with a seating bowl that begins at ice level and goes up. 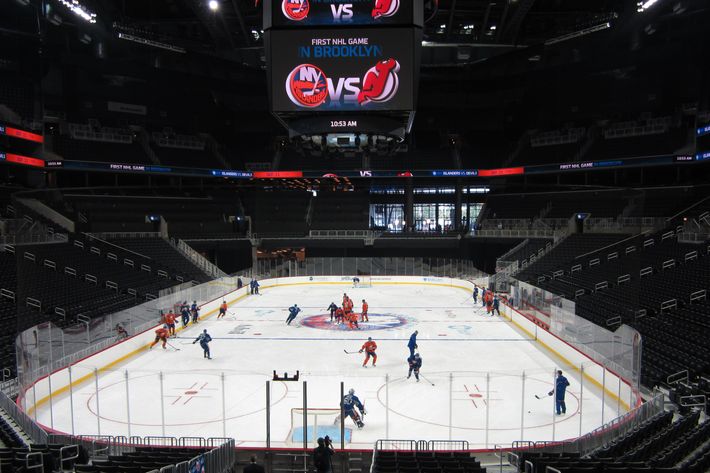 But to squeeze in a hockey rink, the surface couldn’t be perfectly centered; the scoreboard in the middle of the arena, therefore, hangs above one of the blue lines. 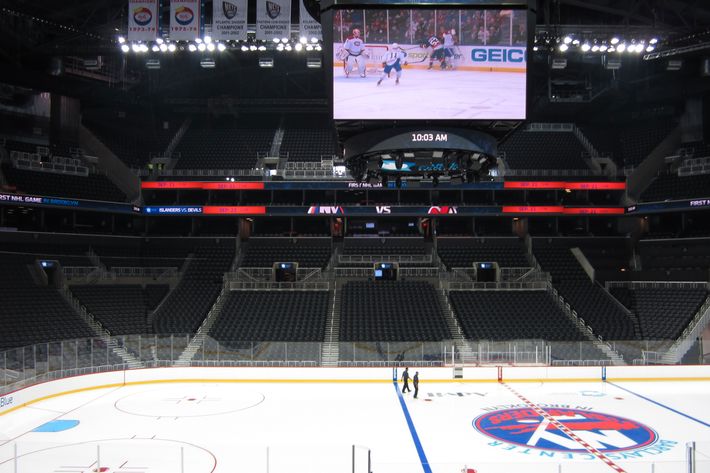 Barclays Center CEO Brett Yormark said that no structural changes were made to the building to configure it for hockey and that there are no plans to make such modifications. (Barclays Center majority owner and developer Bruce Ratner praised the building for its intimacy on multiple occasions.) When asked if Barclays Center had anticipated a permanent hockey tenant when the arena was designed, Yormark admitted the arena was primarily built for basketball and concerts. “But obviously, we always wanted to consider every possible option, and we think that this building is multipurpose. It can accomodate all different types of sporting events, including hockey. So we’re very happy about what it looks like today.”

It’s the west side of the building where things get kind of weird, since the seating bowl can’t stretch all the way to the ice. Instead, its overhang lines up with the boards and begins above the glass behind the net. There are just three rows of seats in these areas; above that is the main concourse and a press area. 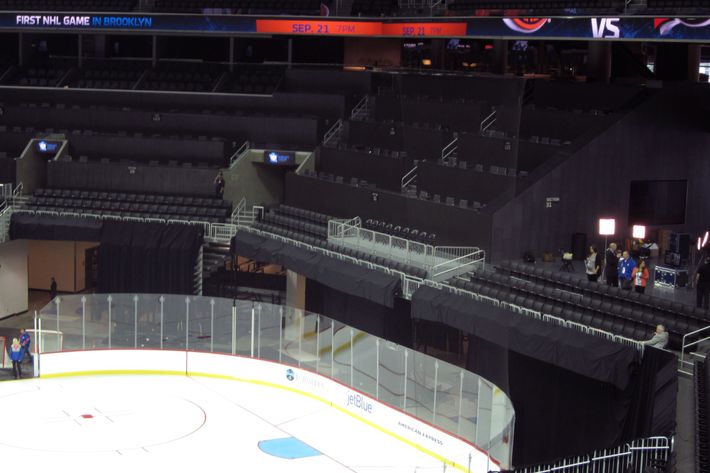 Here’s another view, from above: 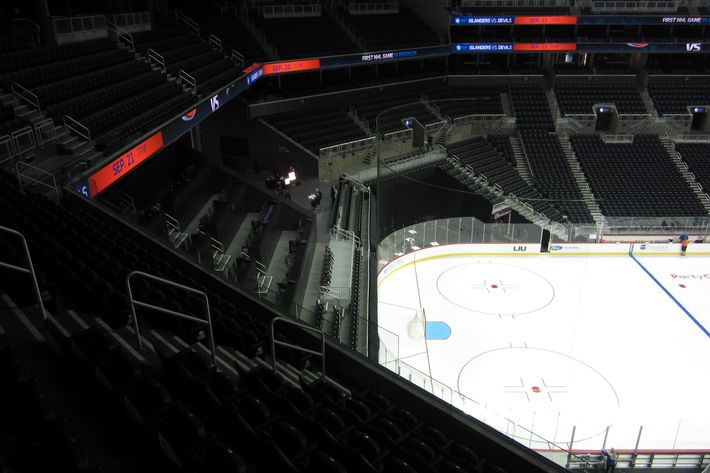 And for perspective, that’s the main entrance to the arena, just above this area. 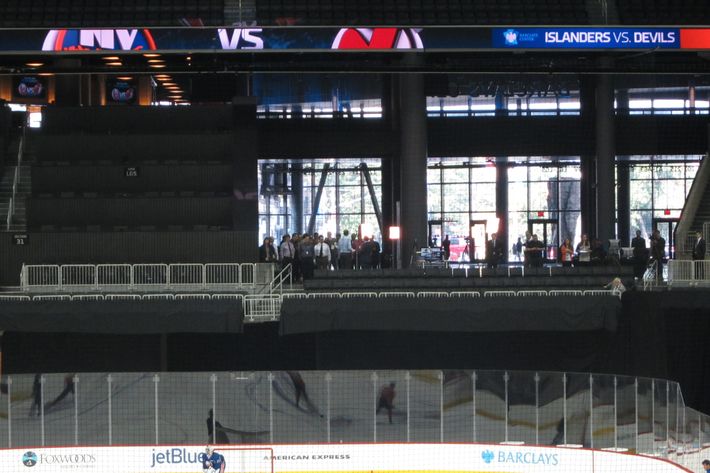 The arena hasn’t finalized its permanent plans for ice-level seating on this end of the space and will experiment on September 21 with using tables and chairs. Here’s what those will look like: 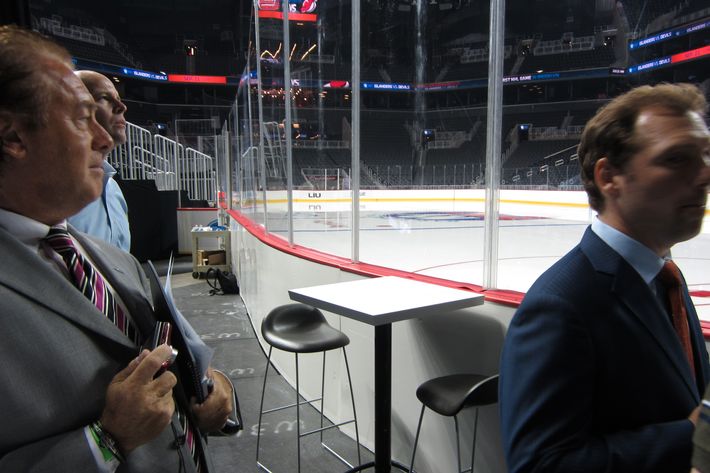 They’ll wrap behind the net from corner to corner. All of the tables and chairs weren’t in place today, but they’ll fill in this space as well on the 21st. 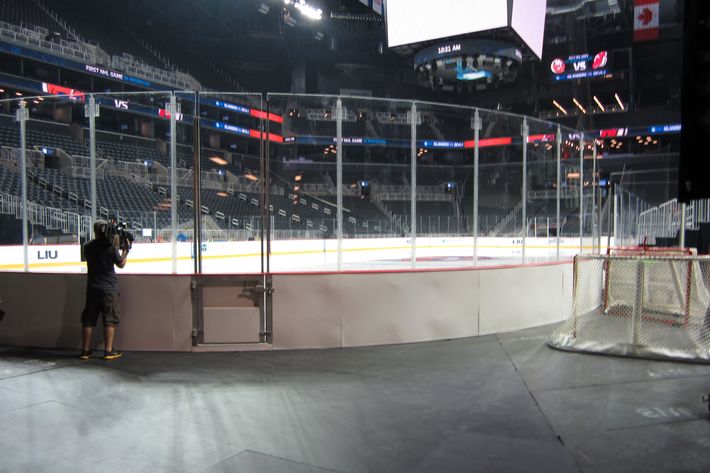 The 100 or so “premium” seats that will be located in this area for the preseason game aren’t counted toward the arena’s official capacity of 15,813. Yormark said there are 416 seats, spread out throughout Barclays, that won’t be sold for hockey games because of sight-line issues.

The Islanders’ four Stanley Cup championship banners were hanging in the arena’s rafters today, and they’ll be there for the team’s game against New Jersey on September 21. When the franchise moves into the building in 2015, all of the team’s banners will hang permanently at Barclays. 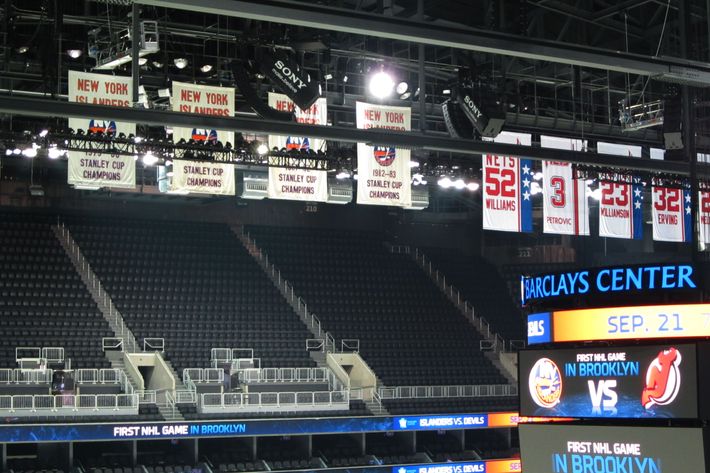 There had been speculation that the Islanders’ jerseys could have a new look when they move from Nassau County to Kings County, and Yormark said definitively today that the team’s colors and logo would remain the same. He said that the main home and away jerseys would mostly stay the same as well, but some form of Brooklyn identification, perhaps in the form of a patch on the shoulder, would be added. (He said they’re working with team owner Charles Wang and the league on that addition.) He said, though, that the team would introduce a third jersey upon moving to Brooklyn. “That is where we’re gonna get a little creative,” said Yormark. “That is where we will speak to Brooklyn in an authentic way.” Added Yormark: “My job is to work with Charles and to make sure we stay true to the hard-core fan, the fan that has been there from day one. But at the same time, we also want to reach out and connect with the new fan, and we’re going to do it in an appropriate way.” As for the game on September 21, we spotted this jersey — with a patch commemorating the first NHL game (preseason or otherwise) to be held in Brooklyn — in one of the merchandise stands. 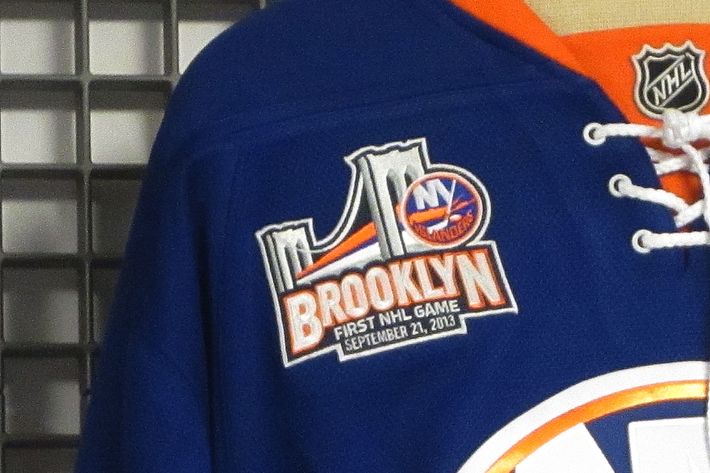 One change to the arena itself will be the construction of what officials called the Islanders’$2 11,000-square-foot “campus” inside the area. (That’s a fancy way of saying the team’s locker room and related facilities.) 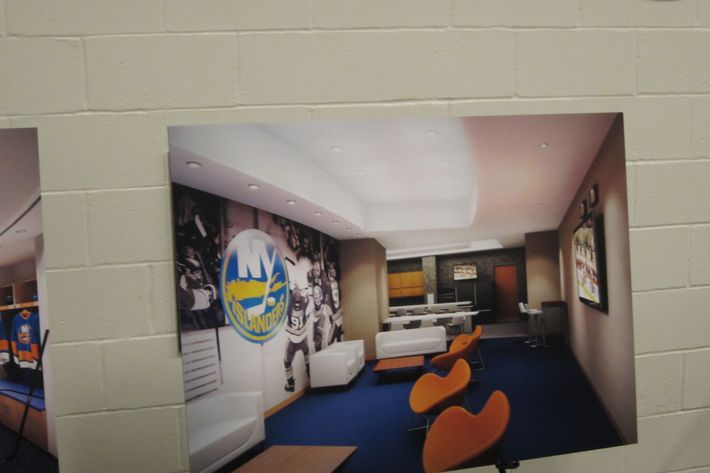 The aim is to create a space so comfortable and state-of-the-art that it helps attract free agents — something that’s difficult to do currently with the team playing in the Nassau Coliseum.