Don’t be fooled by the fancy cars. The stock market’s where the action is. Photo: Rockstar Games

If you’re one of the estimated 15 million people who bought Grand Theft Auto V and have been playing it since it came out last week, you’ve probably spent a lot of time killing gang members, plotting jewelry-store heists, and rendezvousing at strip clubs.

I’m only 14 percent of the way through the game, but I’ve already found a feature that is way more fun than playing the actual missions. Namely, the stock-trading platform, which allows you to buy and sell stocks inside the game using virtual money to invest in made-up companies. It’s one of the tons of mini-games within the game that has nothing to do with the main story line, but I’m already completely addicted.

GTA V’s stock-trading platform is called the “Liberty City National Exchange Index,” and you can access it either from an in-game computer or from a character’s cell phone, which is on them at all times. Open up the page, and you see the home screen, which shows overall market movement and the stocks with the biggest moves. There’s a list of companies on the Markets page that shows the individual stocks you can buy, each with a cheeky description of what the company does, its historical highs and lows, and its performance over the last week. (There’s another exchange in GTA V, called BAWSAQ, which will reportedly allow online trading with other GTA players, but it’s been “under maintenance” since I got the game.)

Since I cover business and often write about companies, I’m not allowed to buy individual stocks in real life. So the opportunity to take a gamble inside GTA V was too enticing to pass up. I navigated to the listings page, found a few companies I liked, and bought some shares. I chose a balanced portfolio that included ten shares in Bank of Liberty (always good to have a financial stock); twenty shares of Augury Insurance (which sells auto insurance — a good bet, considering all the cars I’ve been wrecking); ten shares of Dollar Pills, a “nationwide pharmacy chain”; fifteen shares in Gold Coast Development, a real-estate company; and twenty shares in Life Invader, a Facebook-like “social networking and data mining service.” 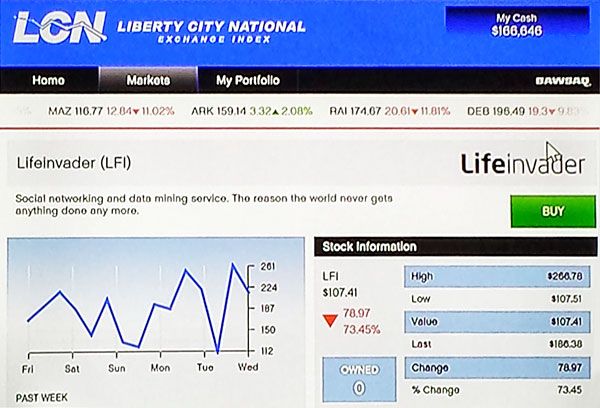 In GTA V, you can trade on the up-and-up, or — like most things in the game — you can break the rules. Throughout the game, you’re given opportunities to manipulate the markets. Some missions, for example, require that you kill the CEO of a company. You could, theoretically, buy the stock of that company’s competitors and profit when they rise after the killing. And since there’s no SEC policing stock trading in Los Santos, you’re not going to be busted for insider trading.

A few hours after buying my initial stocks, I checked my portfolio page to see how they’d done. Sadly, they hadn’t moved much, and the ones that had moved were in the red. I decided I needed to be more aggressive and place a big, concentrated bet. I settled on Krapea, a “post-modern Swedish flat-pack furniture company” that was trading for $54.70 a share. I bought 1,000 shares, spending roughly a third of my cash. (My investment thesis was that, as a growing metropolis, Los Santos will have lots of new homeowners, especially if I keep killing off the old ones.) 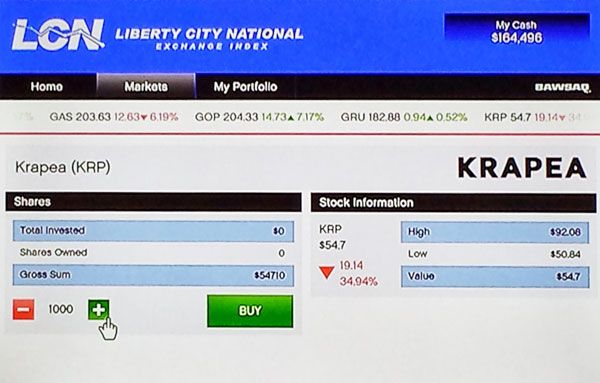 Several hours later, I checked back on my Krapea investment. Ka-ching! The stock had moved up 2.76 percent, making me $1,510 in pure (virtual) profit. I sold my shares, and a notification popped up: “Achievement Unlocked: Trading Pure Alpha.”

Now, there are a few annoying things about GTA V’s stock market. For one, it’s too simple — you can only buy and sell single stocks. You’re not allowed to short-sell stocks, meaning that there’s no way to bet against companies whose stock you think is primed to fall (such as one whose CEO you’re about to kill). You can’t get analyst coverage or research reports to tell you more about any of the companies listed on the exchange, so you’re basically blind-guessing. Most of the stocks move in seemingly random ways. And there are no ways to invest in more sophisticated products like exchange-traded funds or options. (Personally, I’d love a commodities exchange to make bullish bets on all of the metal involved in manufacturing guns.)

But for basic stock trading, the LCN works fine. And so what if you’re at an informational disadvantage when trading stocks? That’s the way it is in real life, too. In fact, maybe the stock market in Grand Theft Auto V is the most realistic thing in the game.