All season long, retiring Yankees pitcher Mariano Rivera has been given gifts by teams the Yankees have visited — and took home presents from his own club, some sponsors, and one legendary metal band as well. Rivera’s gifts have ranged from the awesome to the lame (and in the case of Boston’s, the borderline offensive). But there are a lot of common elements to the gifts he’s received. And so now that Rivera’s farewell tour has ended — he received his final gift in Houston yesterday — here’s a visual guide to all of Rivera’s new stuff. 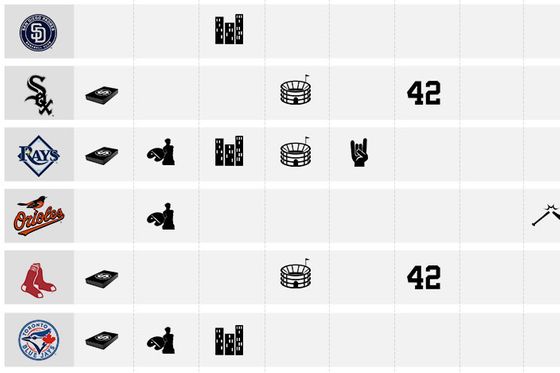 COLORADO ROCKIES (May 8)
• $5,000 donation to the Mariano Rivera Foundation

CHICAGO WHITE SOX (August 6)
• Framed scorecard of his favorite Chicago memory: his first appearance after his second MLB promotion
• Framed picture collage of Yankees’ visit to Chicago after 9/11
• $4,200 donation to the Jackie Robinson Foundation in his name

TAMPA BAY RAYS (August 23)
• “Enter Sandman” sand sculpture
• $3,150 donation to the Mariano Rivera Foundation ($50 for each career save against the Rays)

BOSTON RED SOX (September 15)
• No. 42 from the Fenway Park manual scoreboard
• Painting of Rivera from the 2005 Red Sox opener
• 1934 seat from Fenway Park with No. 42 on it
• Donation to Rivera’s charitable causes in the United States and Panama

TORONTO BLUE JAYS (September 19)
• An Inuit sculpture titled Kiviuq’s Journey — The Angakok and the Eqalookpuk, depicting a man in a canoe reeling in a fish
• $10,000 donation to the Mariano Rivera Foundation

SAN FRANCISCO GIANTS (September 22)
• A pen-and-ink watercolor of Rivera’s appearance at AT&T Park on June 22, 2007
• A customized ESP LTD Kirk Hammett KH-330 guitar, designed by the Giants with Metallica and signed by Willie Mays
• $4,200 donation to the Mariano Rivera Foundation

HARD ROCK CAFE (September 26)
• $10,000 donation to the Mariano Rivera Foundation
• A Martin D-18 Authentic 1939 acoustic guitar
• Retired the song “Enter Sandman” from all Hard Rock locations worldwide, except the one at Yankee Stadium

HOUSTON ASTROS (September 29)
• A painting of Rivera career highlights, configured on a No. 42

Gifts From the Yankees Throughout History