House Republican leaders want to avoid a shutdown, which they recall from the nineties as a political fiasco, and which polls very badly. But they also want to lock in spending cuts from sequestration, which means they are proposing to fund the government at such low levels no Democrat will vote for their plan. That limits their pool of potential votes to just the Republicans. But 40 or so Republicans won’t vote for any plan to avoid a shutdown without abolishing Obamacare, leaving Boehner stuck.

Holding the defund-Obamacare vote is just a desperate play for time. His hope is that, after throwing the vote over to the Senate for its eventual rejection, enough of his irreconcilables will decide to vote to keep the government open after all. That plan ran into immediate trouble when Ted Cruz and fellow Republican advocates of the Obamacare shutdown congratulated the House but predicted that the Democratic majority would defeat the bill, and urged House Republicans to stand fast:

Harry Reid will no doubt try to strip the defund language from the continuing resolution, and right now he likely has the votes to do so. At that point, House Republicans must stand firm, hold their ground, and continue to listen to the American people.

At that point, Boehner’s allies lost it:

House #GOP aide 2 @frankthorpNBC "Cruz, Lee, Rubio r like kids in high school who wld yell fight but hav never thrown a punch in their life"

You can see why they’re angry. The whole point of the ploy was to distract angry conservatives, create a fake fight in the Senate, and temporarily sate their urge to kill Obamacare enough to squeeze through a bill to keep the government open. Cruz exposed the ploy for what it was — just another show vote to repeal Obamacare.

And Cruz is right, and the GOP leadership is wrong. Even if Cruz could miraculously persuade a majority of Senators to pass the Obamacare-killing law, the guy after whom Obamacare is named would never, ever sign it. The Senate is therefore irrelevant. The defunders’ plan revolves around House Republicans refusing to open the government until Obama submits to the destruction of his health-care plan. That is a fantastical plan, to be sure. But at least Cruz’s plan has a rudimentary “A leads to B and then C” logic, unlike Boehner’s plan, which is gibberish.

What makes the House Republican strategery so disturbing is that this flailing effort to solve the government shutdown problem is exacerbating the vastly worse debt ceiling problem. The other half of the House proposal involves promising members that, if they’re good boys and girls who vote to keep the government open, they’ll receive wondrous gifts when it is time to lift the debt ceiling. Oh, the favors they shall receive:

In exchange for a debt-ceiling increase, Cantor told colleagues, the GOP will issue a litany of demands, including a one-year delay of Obamacare, construction of the Keystone pipeline, an anti-regulatory bill called the REINS Act, and other spending reforms. The exact combination will be negotiated with President Obama and Reid.

You can picture Cantor, Boehner, and Paul Ryan, encircled by wide-eyed Republican members, excitedly asking, “And will there be food stamp cuts? And guns?” and the GOP leaders telling them, oh, yes, food stamps will be snatched away from the lazy 47-percent-ers, and there will be a rifle in every schoolroom.

The debt ceiling, unlike a government shutdown, is a true weapon of financial mass destruction, which is exactly why Obama believes he has to break the habit of using it for extortion that began in 2011. Not only can he not capitulate on ending (or delaying Obamacare), he can’t allow Republicans to jack him up for concessions at all. To do so would be to enshrine the process of debt ceiling extortion, letting Republicans extort him (and any future Democratic president) repeatedly until eventually default happens anyway. Actually letting House Republicans instigate default would make more sense. Obama made this point yesterday: 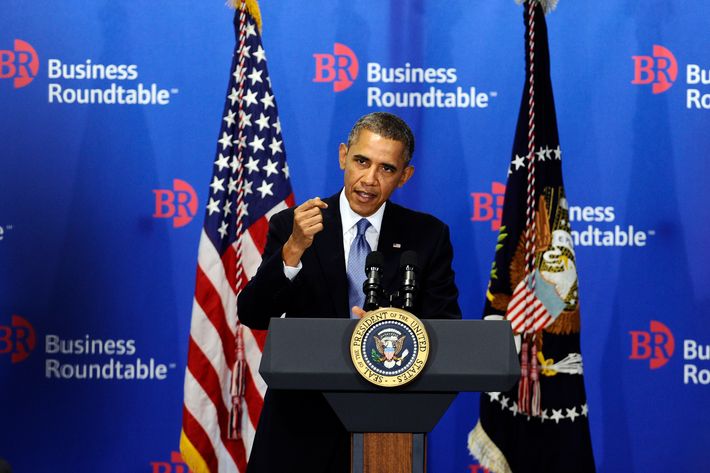 What I will not do is to create a habit, a pattern, whereby the full faith and credit of the United States ends up being a bargaining chip to set policy.  It’s irresponsible.  The last time we did this in 2011, we had negative growth at a time when the recovery was just trying to take off.  And it would fundamentally change how American government functions. …

And I have responsibilities at this point not just to the current generation but to future generations, and we’re not going to set up a situation where the full faith and credit of the United States is put on the table every year or every year and a half, and we go through some sort of terrifying financial brinksmanship because of some ideological arguments that people are having about some particular issue of the day.  We’re not going to do that.

It is possible to imagine some kind of face-saving compromise, like the one that occurred last spring, where the administration “gave” House Republicans a commitment to make the Senate pass a formal budget (which they hailed as a victory, only to later discover it was less than worthless, depriving them of a talking point while providing no benefit at all). But how do you close the gap between Obama’s determination not to give anything of any value with the House GOP’s swelling expectations of a bountiful ransom?

Politico reports, “Top Republicans close to and in the House leadership hope that Obama sees the wisdom of a big budget deal that increases the debt ceiling in exchange for some fiscal reforms.” Of course Obama would love a big budget deal. He’s proposed one in his budget. But Obama’s idea of a budget deal involves the two sides trading off policies they don’t like — close some tax deductions in return for cuts to Social Security and Medicare. House Republicans really don’t want to make a deal like that. And their expectation that holding out on the debt ceiling will bring Obama to his knees makes them even less likely to accept a Grand Bargain. So the House Republican plan amounts to hoping Obama just capitulates at the end.

Absolutely nothing about the House GOP’s behavior suggests they have a plausible resolution in mind. One smart, or at least plausible, plan to lift the debt ceiling would be to shut down the government first. Then Republicans could show they’re fighting, and then sell the need to lift the debt ceiling to their irreconcilables as a necessary tonic to calm the markets during the shutdown. Instead, they’re desperately avoiding a shutdown and actively courting a debt ceiling crisis.