Two new detailed polls out today, from The Wall Street Journal and the Pew Center, confirm and deepen the grim state of public opinion on Obamacare. The law remains as unpopular as ever. There is a massive intensity gap between opponents of the law and supporters (41 percent of Americans strongly disapprove, against just 26 percent who strongly approve). And the main characteristic of public opinion is that people have no idea how the law works.

Lack of knowledge about the law has always been closely associated with opposition. Most of the provisions of the law, when described to people, poll well. But few people know what provisions are in the law, let alone how they fit together. And the less people know about the law, the less they like it:

And yet the picture is not quite as negative as the topline numbers indicate. The fact that confusion drives public opposition means that the intense ideological hatred for Obamacare that has come to define the Republican Party — as I argue in my story in this week’s print magazine — means that Republicans lack much support for their fanatical mission to destroy it. Only 23 percent of Americans want elected officials to make the law fail: 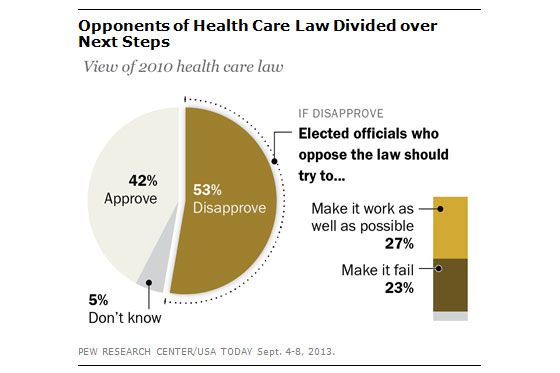 These are, however, the most committed Republican partisans, and the ones most likely to vote in GOP primaries, which has made Republicans in Congress heed their demands for provoking an apocalyptic confrontation.

The most important information is how little the uninsured know about the law. Seventy-six percent of people who don’t have health insurance don’t understand the law. Only half of them know that there are subsidies to offset the cost of buying insurance for people with low incomes. (For a yes/no question on which even a completely uninformed person has a 50 percent chance of guessing right, half is a really low proportion.)

The uninsured have always approached the health-care debate with a toxic mix of cynicism and lack of specific understanding. Sarah Kliff is one of the many reporters who has found this:

“Change is good, and it may be a real change, but if it was doable, it would have been done by now,” Marina Sokolovsky, a 26-year-old who lacks insurance, told me when I met her late last year at a focus group on the health law. “For how complicated things are, it would be a really big shift to find something functional. I just don’t think that’s possible.”

The lack of information at the hands of the uninsured represents one of the greatest barriers to the success of the law. And that lack of information is itself a political weapon against it. Republicans have attacked funding for outreach that is needed to spread awareness of the law’s availability. Residents of states whose governors have boycotted establishing a health exchange are particularly unlikely to know that the law is available to them.

At the same time, this also highlights the politically transformative potential of Obamacare. The American health-care-policy debate has traditionally ignored the needs of uninsured Americans. Doctors and hospitals receive solicitous treatment from Washington. So do Americans who get employer-provided care. Both the industry and the ranks of the insured can identify their interests, and those interests are protected as a result. Elected officials have allowed a system to persist for decades that subjects tens of millions of Americans to intolerable risk because those Americans are outside the system.

Once they are in the system, everything changes. Any future revision will have to account for them. Anybody who wants to overhaul the health-care system will not merely have to protect insurers and medical providers but Americans in health exchanges, too. It will no longer be possible for Republicans to propose repealing Obamacare and making some vague hand-waving to do something for the uninsured at some future point. Republican health-care reform will have to include everybody. All this is contingent on the law actually getting up and running.

Republicans are afraid of that transformation, and they’re right to be.

The Plot to Kill Obamacare

+Comments Leave a Comment
What the New Obamacare Polls Reveal