Jamie Dimon did something today he’d never done before as the CEO of JPMorgan Chase. He lost money.

JPMorgan Chase reported a surprising quarterly loss of $380 million today, the first such loss during Dimon’s tenure. On one level, the loss (which was blamed on $9.2 billion in legal expenditures) isn’t surprising; the bank is being sued for at least 40 different things by a multitude of agencies and entities, and all those lawyers don’t come cheap. But on another level, the loss represents a dramatic reversal of fortune for Dimon himself. He’s now vulnerable, in a way he’s never been before.

The problem, for those prone to attacking Jamie Dimon over JPMorgan’s parade of scandals, is that he has historically been very, very good at the biggest part of his job, which is making money for his shareholders. Subprime suits were flooding in, the London Whale was losing billions of dollars, and still, the money pits kept growing: 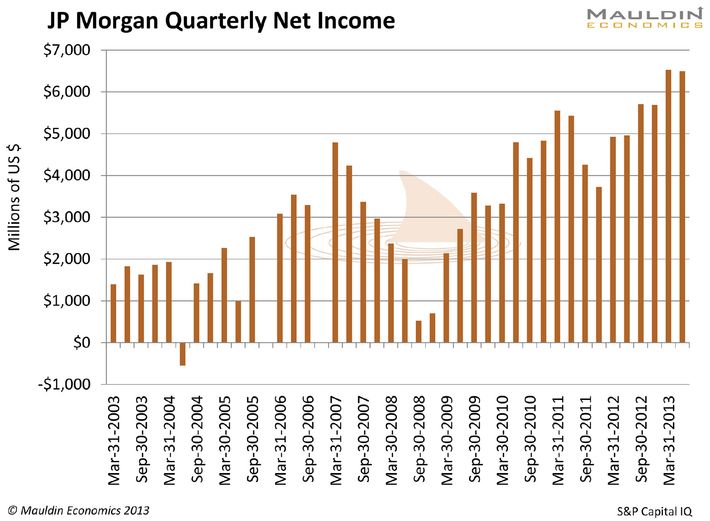 Now, with a quarterly loss, Dimon no longer has a money-shaped shield. Along with announcing the loss because of the legal expenses already incurred, Dimon also announced that JPMorgan Chase now has a $23 billion stash reserved for future legal expenses. To put that number in perspective: $23 billion is more than JPMorgan Chase’s entire profits in 2012. If the bank does dip substantially into those reserves — by paying, say, an $11 billion global settlement with the Department of Justice — there’s almost no chance it will be profitable in the next few quarters either.

The defense from Dimon, of course, is that these expenses are one-offs and will pass in time. The core business of banking, loan-making, and trading, they say, is still a robust money-printing machine. Corporations (but especially banks) always do this. They claim they would have been profitable except for a onetime tax, a write-down on an acquisition, or some other fluke occurrence. And to a large extent, they’re usually right.

But JPMorgan’s legal losses aren’t an exogenous variable anymore. They’re the core reason the bank is losing money. So claiming a onetime freebie on earnings because of lawsuits would be like BlackBerry saying, “We would have made $40 billion last quarter if people had bought our phones instead of iPhones.”

Guessing when or if Jamie Dimon will step down or be forced out as JPMorgan’s CEO is a fool’s game. Even during the London Whale scandal, and the criminal charges and congressional outrage that followed, there was no real chance of an ouster since the overall bank was still so profitable. But the now-infamous CNBC defense of Dimon — that he’s untouchable because JPMorgan Chase still makes money — is no longer valid. JPMorgan Chase isn’t a profitable bank, for the moment, and that means Dimon’s protective covering is gone.

Dimon, in some ways, has the opposite problem that Lloyd Blankfein, the CEO of Goldman Sachs, faced in 2011 and 2012. To put it simplistically, Blankfein was pressured toward the door in part because Goldman was making too much money — from its housing shorts, prop trading, and other unscrupulous transactions that brought on the ire of the public. And when Goldman reported a loss in the third quarter of 2011 due in part to poor performance in its trading division, it was perversely a good thing for Blankfein’s prospects: It proved that Goldman was mortal and that, like the rest of the banking sector, it was complying with new regulation meant to make the sector less risky.

But losing money because of a CEO’s fundamental error in oversight — or several dozen of them — is the kind of thing that sets bank boards in motion. Recall that it was one bad write-down, on the heels of a failed “stress test” by the Federal Reserve, that led the board of Citigroup to stage a coup on CEO Vikram Pandit. The Pandit coup had been long in planning, but only when the errors Pandit had made affected the quarterly bottom line did the board have the gumption to remove him.

Dimon won’t face a Pandit-like coup, at least not yet. He’s still got lots of fans inside the company, and the board is stacked with Dimon loyalists. There was no indication on today’s earnings call that Dimon is growing weary from the battle with regulators and prosecutors, and he may well start turning a profit again sooner than we expect.

But if there is an anti-Dimon faction inside the bank’s upper management, the quarterly loss has given that faction the cover it needs to start sowing doubts about whether Dimon is still the right person to be running JPMorgan Chase. The biggest threat to Dimon’s empire might appear to come from the SEC, DOJ, and other government regulators. But it’s really the forces inside his own house that should worry him.

+Comments Leave a Comment
Beginning of the End for Jamie Dimon?