The man who appeared to be the instigator in yesterday’s anarchic West Side Highway clip of a biker gang versus a family-filled SUV has been caught and charged, while cops continue to look for the rest of his enforcers. Christopher Cruz, who can be seen cutting off a Range Rover and then slowing down, was rear-ended by the vehicle, leading his friends to surround the SUV and slash its tires. Cruz was charged with reckless endangerment, reckless driving, endangering a child, and menacing in the incident, which only got worse from there.

Alexian Lien, the 33-year-old father of a 2-year-old daughter, can be seen accelerating through the group of bikers who’d confronted him, but ultimately lost the chase because his tires went flat. His window was smashed and that’s where the video stops. Lien was then allegedly dragged from the vehicle, punched, and slashed, the New York Post reports (with pictures), as his wife and child looked on.

Update: The rider seen punching the video in the window has turned himself into police in Queens, NBC New York reports.

Meanwhile, the wife of one of the bikers who was hit when the SUV accelerated through the surrounding group told CBS that her husband, Edwin Mieses, is in a coma and may not walk again. “He went to help someone,” she said Tuesday afternoon. “This man needs to know he hurt someone. That man paralyzed my husband. He needs to pay for what he did.”

Lien, the SUV driver, will not be charged, police said, but a Facebook group called “Justice For Jay Meezee” has collected more than 9,500 “likes”: 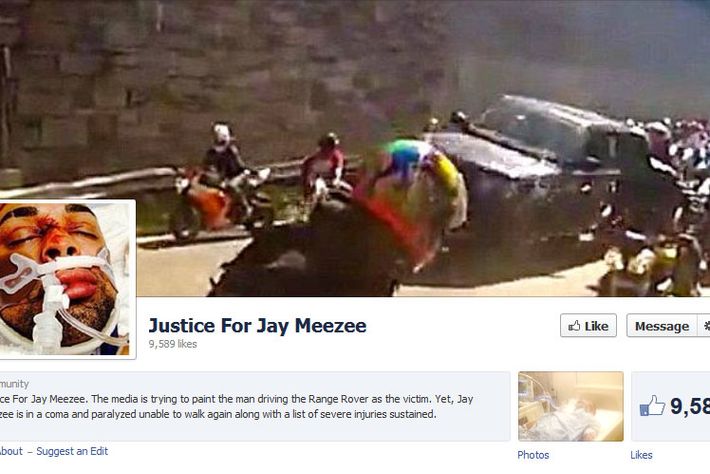