Two days ago, when people first noticed that some closed national parks were, confusingly, open for “1st amendment activities” only, we jokingly suggested that someone in D.C. should grab a menorah and test the limits of this policy — the first amendment, after all, guarantees the “free exercise” of religion as well as freedom of speech. Earlier today, Hannah Goldstein, a heroic 29-year-old rabbi at D.C.’s Temple Sinai, heeded that call. With a dreidel.

Taking a break during her morning run, Goldstein entered a park near the William Tecumseh Sherman monument behind the Treasury Building, whipped out a small plastic dreidel and a few coins, and freely exercised her religion. Five minutes later, the experiment was complete.

“There was a lot of security around, but nobody seemed particularly concerned about our first amendment activities,” Goldstein tells Daily Intelligencer. “I assume that’s because we were protected by the sign.” 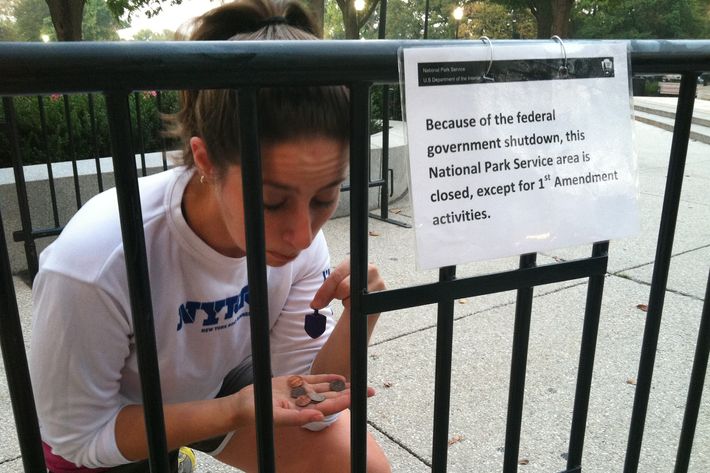 However, at the same time, Goldstein admits that “there were a lot of other runners who were engaged in non-first-amendment ventures in the park and security did not seem very alarmed.” So maybe nobody cares.

Some closing thoughts from Goldstein about this adventure in Constitutional rights? “As a rabbi, I just want to mention that I am aware that it is not actually Hanukkah right now.”