The above GIF shows Eli Manning throwing an interception off his own player’s helmet during the the Giants’$2 36–21 loss to the Philadelphia Eagles yesterday. The team is now 0-5, but that dismal record, their worst since 1987, hardly begins to describe just how terrible they are. This paragraph helps to put things in perspective:

ESPN Stats & Information tells us the Giants are the third team in NFL history to allow 30 or more points in each of its first five games, and the second (joining the storied 1954 Chicago Cardinals) to also turn the ball over at least three times in each of the first five. Their 182 points allowed are the fifth-most in league history through the first five games of a season and the most since 1967. 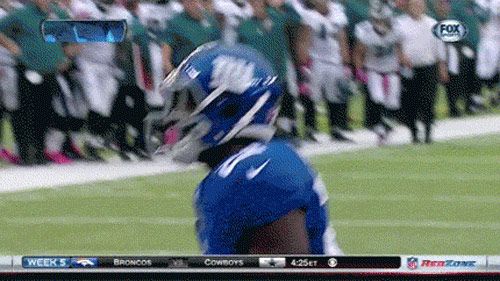