It’s Day Two of the first government shutdown since 1996, and we don’t seem any closer to a resolution than we were on Day One. As Democrats stand firm on a “clean” continuing resolution and Republicans increasingly focus their efforts on ensuring that World War II veterans can visit monuments, which is the nation’s most pressing issue right now, we’ll be keeping track of all the latest developments right here.

10:58 p.m.: Republican Rep. Marlin Stutzman explains the shutdown in one overly-candid quote:  “We’re not going to be disrespected …. We have to get something out of this. And I don’t know what that even is.”

House votes to #opentheparks & museums. http://t.co/N2sUrvHqbk Why wouldn’t Senate Dems want to do that?

6:13 p.m.: The House has passed a bill to let D.C. spend money — just like all the other big-boy cities! (It will probably die in the Senate.)

5:15 p.m.: Here’s Harry Reid pretending like he doesn’t want to murder kids who have cancer. 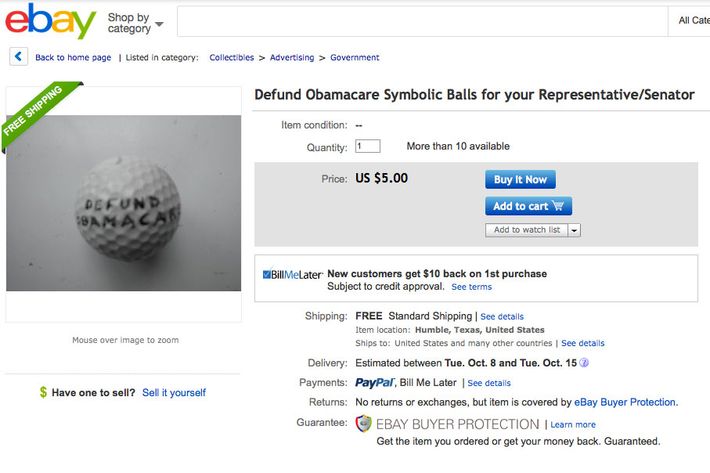 4:34 p.m.: Darrell Issa is now probing whether the closure of the World War II memorial was “political.” Because if there’s one thing the GOP is against, it’s shutting things down for political reasons.

Issa probe into WWII memorial is at preliminary stage, but House GOP is definitely interested in whether these closures were political

4:13 p.m.: In an interview with CNBC, President Obama said Wall Street “should be concerned,” a.k.a., should help me convince these crazy people to stop being so crazy. Obama also said he’s “exasperated” with Republicans and noted that John Boehner could end the shutdown “in the next ten minutes” if he just brings a clean continuing resolution up for a vote.

3:11 p.m.: Never underestimate the ability of a Republican to connect Benghazi to any other thing:

. @BarackObama sent 7 security guards to #WWIIMemorial this AM to keep out our vets. Sadly, that is 2 more than were present in Benghazi.

2:38 p.m.: Because our brave and proud World War II veterans deserve nothing less than to be used as political props.

spoke to a # of GOP members coming out of RSC meeting. They're feeling confident and relaxed. Think WWII mem fiasco gives them upper hand

2:03 p.m.: A number of D.C. food establishments are offering specials to furloughed government employees but asking members of Congress to pay double. Take that, The Man.

2:00 p.m.: Out in Idaho, the shutdown delayed and diminished the search and rescue mission for a woman who went missing in a national park.

Go call the po-lice, Go Call The Gu-vunah! Someone tell Congress to get to #WorkBxxCH

Reid describes his conversaion with Boehner as "cordial." "No one was yelling at each other."

12:56 p.m.: “At one point, a veteran yelled ‘Sarah!’ as Bachmann approached him. She kindly explained that she is not, in fact, Sarah Palin.” The shutdown was all worth it.

12:54 p.m.: Eric Cantor is “really tired of playing games,” which is why he wants Congress to vote on restoring National Institutes of Health funding so it can continue helping kids with cancer, while keeping the rest of the government closed. So tired of the games.

Park ranger breaks down "sometimes you just want to punch these congressmen in the face."

11:59 a.m.: Everyone has really high expectations for this meeting between Obama and congressional leaders.

Fair or unfair, but there is deep suspicion within House and Sen GOP ranks that O is posturing w/ mtg. Will enter WH very skeptical

11:45 a.m.: President Obama has invited congressional leaders to the White House at 5:30 this afternoon. “We’re pleased the president finally recognizes that his refusal to negotiate is indefensible,” John Boehner’s spokesman says, passive-aggressively.

11:10 a.m.: It took some real political courage, but members of Congress have managed to open up the World War II memorial for World War II veterans.

Members of congress have formed a receiving line for WWII vets who are entering the memorial pic.twitter.com/zT3NPOEWCH

10:35 a.m.: Director of National Intelligence James Clapper points out that putting American intelligence-community employees out of work is not great for our national security. After Snowden we only have like four or five more secrets and we really can’t afford to lose them.

!! Clapper: “This is a dreamland for foreign intelligence services to recruit…our employees are going to have greater financial challenges.”

9:42 p.m.: From Jonathan Chait’s latest, on what the shutdown means for the much more important fight over the debt ceiling: “Evidence can be found for both alarm and complacency, but the preponderance of proof seems to lie on the side of freaking out.”

9:25 a.m.: Apparently this D.C. memorial for the 2nd Infantry Division’s World War I casualties is off limits unless you want to participate in some “1st amendment activities.” Can a D.C. local please grab a menorah and test this policy? Take photos and report back. Thanks.

"Because of the fed govt shutdown, this National Park Service area is closed, except for 1st Am activities." pic.twitter.com/TMMI2lmUMa

Asked a uniformed Secret Service officer what it means if area is closed "except for 1st amdt activities." 1/2

9:02 a.m.: Why won’t John Boehner bring a clean continuing resolution to the floor, even though it would likely pass with a majority of Democrats and Republicans, thus ending the shutdown? One House Republican tells Byron York that Boehner is “scared” that the 30 or so hardcore shutdown supporters in the House “could somehow force a speaker’s election” if that were to happen. In other words, 800,000 government employees are out of work right now so John Boehner can keep his job.

9 a.m.: The shutdown ruined this kid’s trip to D.C. and Obama’s trip to Asia next week. The White House announced this morning that, because of the shutdown, Obama will have to skip his scheduled stops in Malaysia and the Philippines. Those countries will pretend to be fine with getting John Kerry instead.

THE FEED
8:38 p.m.
marjorie taylor greene
marjorie taylor greene
Why Is Marjorie Taylor Greene Headed to the Cradle of Presidential Campaigns?
By Ed Kilgore
Does the conspiracist Georgia congresswoman see herself running for president? It’s unclear what else she could be doing at the Iowa State Fair.
5:39 p.m.
view from the bunker
view from the bunker
Andrew Cuomo’s Last Play to Hold Onto Power
By David Freedlander
“He is not resigning,” said one ally. “It is just not in his nature to ever do that.”
5:05 p.m.
covid-19
covid-19
What About a Booster Shot Now?
By Paola Rosa-Aquino
With Delta circulating, the question of whether more shots are needed has taken on new urgency. Here’s what we know.

4:23 p.m.
eviction moratorium
eviction moratorium
Conservatives Are Freaking Out About the Eviction Moratorium
By Ed Kilgore
One National Review writer encouraged civil disobedience as a response to Biden’s move.
3:16 p.m.
politics
politics
What Cori Bush Taught the Left
By Zak Cheney-Rice
To move the Democrats, you have to humiliate them.
2:28 p.m.
politics
politics
Trump Nearly Enlisted the Justice Department in His Coup Scheme
By Ed Kilgore
A high-ranking DOJ official wanted to urge GOP legislators to steal Biden’s win, but colleagues rebuffed him. Next time we might not be so lucky.
1:17 p.m.
tokyo olympics
tokyo olympics
Why Can’t the U.S. Men’s Relay Team Pass a Baton Correctly?
By David Gendelman
It crashed out of the Olympics by once again failing at a seemingly simple task.
12:55 p.m.
politics
politics
The Most Powerful Labor Leader in America Has Died
By Sarah Jones
AFL-CIO president Richard Trumka passed away unexpectedly, in a blow to organized labor at a critical time.
12:34 p.m.
the national interest
the national interest
Why Mitch McConnell Is Giving Joe Biden a Bipartisan Infrastructure Win
By Jonathan Chait
I thought Republicans would kill it. Here’s what I got wrong.
12:20 p.m.
explainer
explainer
What to Know About the Cuomo Investigations and Possible Impeachment
By Chas Danner and Nia Prater
The governor is still the subject of multiple state and federal investigations. Here’s where the probes stand, and how impeachment could play out.
11:51 a.m.

A Delta Variant silver lining: more people are getting vaccinated

Thursday just in: +864K doses reported administered over yesterdays total, including 585K newly vaccinated. Highest single day numbers in over a month! Unlike prior waves, we have safe and effective vaccines that can minimize the impacts of COVID-19. Let’s get everyone protected!
—@cyrusshahpar46
11:30 a.m.
evictions
evictions
The Best Thing About the New Eviction Moratorium Is More Time to Get Rent Relief
By Caroline Spivack
But the CDC order will only apply while COVID rates are high.
11:15 a.m.
sports!
sports!
The Best Things We’ve Seen at the Olympics So Far
By Claire Lampen and Mia Mercado
A swim coach horny for gold, teens shredding the skateboarding category, and more.
8:42 a.m.
politics
politics
Cuomo Faces Several New Criminal Probes Over Sexual Harassment
By Nia Prater
DAs from Albany, Manhattan, Westchester, and Nassau requested info from the AG’s office following the release of its report on the governor.
8:00 a.m.
politics
politics
What Is Kyrsten Sinema’s Deal?
By Tom Zoellner
The senator from Arizona puzzles and irks her fellow Democrats in equal measure.
7:00 a.m.
politics
politics
How Is Andrew Cuomo Still Here?
By Rebecca Traister
A shocking new report is a test of his ability to bend reality to his will.
8/4/2021
nyc
nyc
New York City’s Vaccine Mandates Are Working
By Matt Stieb
Vaccinations have increased significantly since Mayor de Blasio announced that city employees must prove they signed up for a shot.
8/4/2021
politics
politics
Andrew Cuomo Didn’t Act Alone
By Ross Barkan
His inner circle enabled him. They should go down with their leader.
8/4/2021
federal rental assistance
federal rental assistance
Stalled Rent Relief Is a Glimpse Into the Flaws of Federal Aid Distribution
By Ed Kilgore
The failure to speedily deliver $47 billion in aid to renters shows the flaws of routing benefits through fragmented state and federal programs.
8/4/2021
intelligencer chats
intelligencer chats
The Tokyo Olympics Haven’t Felt Like Must-See TV
By Jen Chaney and Benjamin Hart
Blame it on the time difference, the pandemic, the lack of a unifying star, or all of the above.
8/4/2021
politics
politics
Andrew Cuomo’s Big Gross Book of Touches
By Choire Sicha
If you thought the governor’s COVID memoir was bad, just take a look at this.
8/4/2021
politics
politics
Silly Season Arrives in Senate As Major Legislation Advances
By Ed Kilgore
Get ready for “messaging amendments” and “vote-a-ramas” as pointless debate precedes passage of the infrastructure bill and the budget resolution.
8/4/2021
politics
politics
Cuomo Faces Impeachment, Criminal Charges After Sexual-Harassment Report
By Justin Miller and Laura Nahmias
The governor is accused of preying on 11 women, retaliating against one, and breaking state and federal laws.
8/4/2021
the national interest
the national interest
Tucker Carlson Has Seen the Future, and It Is Fascist
By Jonathan Chait
An important marker on the Republican road to authoritarianism.
8/4/2021
explainer
explainer
What We Know About the Dangerous Delta Variant
By Chas Danner and Paola Rosa-Aquino
The more transmissible COVID strain now accounts for an estimated 93 percent of new cases in the U.S.
8/4/2021