Since my first foray into the stock-trading mini-game hidden within Grand Theft Auto V, I’ve continued to play the markets on my own, amassing several million dollars through a combination of fortuitous trades and shady insider dealings.

But I recently discovered that there are GTA V players who are much more dedicated to the game’s stock-trading feature than I ever will be. These players aren’t only making virtual money for themselves, but they’re trying to help each other, via a series of massive stock-manipulation schemes being hatched on Reddit and in the official GTA forums.

To understand what’s happening, a few background data points might be necessary:

• There are two playable stock exchanges inside GTA V: LCN and BAWSAQ. On each of these exchanges, you can buy and sell stocks using the virtual cash you amass during the course of the game. (This cash has no real-world value, but it can be used to buy houses, airplane hangars, and other cool things inside the game.)

• Most of the time, these stock prices appear to move randomly. But in certain missions, your character is given a tip that, due to an in-game event (usually, an assassination of a CEO), a company’s stock is about to rise or fall precipitously. When this happens, you’re supposed to load up on the stock (or its competitor’s stock), kill the CEO, then profit from your trades.

• Rockstar Games, the makers of GTA V, have hinted (but never confirmed) that BAWSAQ, the second exchange, might be dynamic — in other words, it might move in response to the actions of other GTA V players, whose trades feed into a central online database. If thousands of players around the world happen to buy a bunch of guns simultaneously, the theory went, the BAWSAQ might reflect that activity by raising the price of Ammu-Nation stock (Ammu-Nation being the store where guns are purchased).

• There is no penalty for insider trading or securities fraud in Grand Theft Auto.

Various online guides already existed with hints on how players could use the game’s missions to amass as much cash as possible on their own. (Here’s one that promises to help make your character a billionaire.) But when Rockstar hinted that BAWSAQ might be subject to collective behavior, players banded together in cartel fashion to see how they could maximize their profits.

Eventually, the stock-traders had an idea to test BAWSAQ’s mechanics. What if they chose one stock, bought a bunch of shares, and sold them all at a pre-determined time? That way, if the stock tanked, they’d know it was because the market followed real-world supply-and-demand patterns, and was responding to their trades.

Monday, they hatched their plan. Using the official GTA forums and a subreddit called r/GTAMarket, they spread the word to buy shares of a beer company called Pisswasser (ticker symbol: PIS), then sell them all at 6 p.m. Eastern Daylight Time. Buying and selling en masse, they thought, would make Pisswasser shares rise and then fall, and allow them to profit twice – once when they sold at the top, and again when they bought at the bottom and the stock recovered to a normal price.

The community got very, very fired up about this plan. “SELL PIS OR GET CAUGHT IN THE WATERFALL OF TEARS THAT COMES WITH FALLING STOCK PRICES!!!” wrote one GTA forum poster who started the longest thread about the scheme. Someone built an external stock tracker, so players could check on prices even while away from their video game consoles. A user on the GTAMarket subreddit posted this Wall Street photoshop, noting the similarity to Gordon Gekko’s “Blue Horseshoe loves Anacott Steel” scheme. 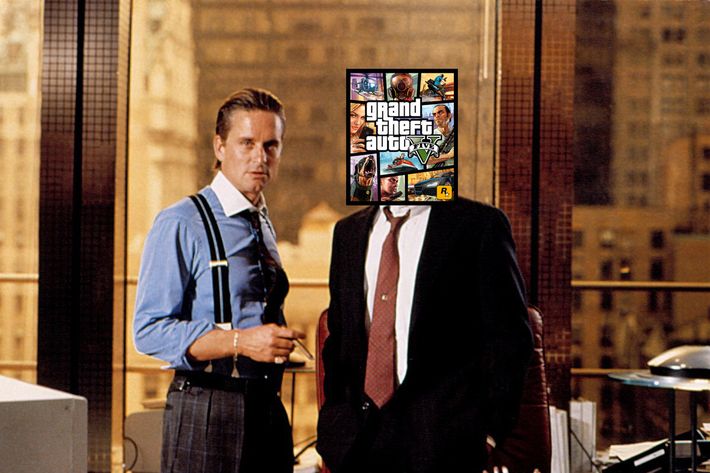 Unfortunately, the amateur Gekkos struck out. When I checked on BAWSAQ during the designated “sell” period, the stock price of Pisswasser had actually gone up nearly 4 percent, indicating that the market wasn’t responding to the mass sell-off. “Its been 12 hours after the ‘sell sell sell’ frenzy yet, the price for PIS (Xbox360) has steadily inclined,” one frustrated trader wrote. And despite their bold hopes of billion-dollar profits, nobody seems to have made more than a few dollars from the Pisswasser scheme.

GTA V message boards are filled with all kinds of speculation about why the mass pump-and-dump scheme didn’t work – mistimed trades, too few trades to move the market, a conspiracy theory that Rockstar saw the scheme play out and deliberately quashed it. But most users now agree that BAWSAQ isn’t responsive to mass stock sell-offs – or at least, that it’s not as easily manipulable as they had hoped. So chalk this one up to a failed experiment.

But they haven’t given up. Grand Theft Auto Online, a web-enabled multiplayer version of the game, launched yesterday. Some stock schemers are hoping that the markets in the online version will be responsive in the way the current ones aren’t, and enable them to fill their virtual wallets with imaginary cash many times over. “With GTA:O now online, we should wait for 3 or 4 days after launch, till the dust settles (IF the dust settles by then) so we can try something and hope to get meaningful results and money out of it,” one trader wrote.

As for me, I’m going to stick to my tried-and-true GTA V stock-trading technique: random, uninformed speculation.

THE FEED
8:00 a.m.
games
games
There Is No Fixing This
By Will Leitch
Tua Tagovailoa’s ugly injury is the latest reminder that no policy change can excise brutality from the NFL.
8:00 a.m.
the money game
the money game
Mohamed El-Erian on the Looming Recession — and What He’s Doing With His Money
By Jen Wieczner
“I don’t know how to convey it, but we came very close to a financial accident in the U.K,” says the markets guru.
10/4/2022
the sports section
the sports section
Aaron Judge Did It
By Joe DeLessio
The Yankees slugger hit his 62nd home run, breaking a still-sacred baseball mark. He’s also having a pretty good season in other categories.