Washington, D.C., is on high alert this afternoon after gunshots rang out near the U.S. Capitol Building. A woman in a black sedan attempted to breach a barricade at the White House before leading officers on a chase, which ended in gunfire, according to U.S. Capitol Police Chief Kim Dine. “It appeared, from his account, that all shots had been fired by police officers trying to stop the woman’s car,” the Washington Post reports.

The suspect was killed, according to various reports, and there was a child present in the car.

Congress and the White House, in the midst of ongoing shutdown negotiations, were placed on lockdown and ordered to “shelter in place” while FBI agents and Capitol Police responded to the scene.

Just before 3 p.m., the lockdown was lifted. Authorities are now trying to sort out what happened.

6:21 p.m.: Rep. Michael McCaul of Texas, following a security briefing, said the driver is believed to have been a 34-year-old African American woman with a possible history of mental illness.

6:11 p.m.: Police confirmed at an evening press conference that the suspect was pronounced dead after the chase, but declined to elaborate. “We’re not talking about the suspect at this time,” said Capitol Police Chief Dine. “We’re not discussing the suspect.” A one-year-old child was taken to the hospital.

6:01 p.m.: The New York Times has this account of the beginning of the chase:

The woman, whom the authorities did not identify, had “attempted to pass a barricade” near the White House, said Kim Dine, the chief of the Capitol Police, and struck an officer in the process.

“The guys ran to try to stop her, and she wasn’t going to slow down, so they jumped aside,” said B. J. Campbell, a tourist from Portland, Ore., who was standing near the White House. “One of the guys grabbed one of those little metal fence sections and shoved it in front of her, across the driveway. She hit the brakes slightly and tried to get around it on the right, but the guy shoved it in front of her again, to try to keep her in.”

Mr. Campbell said the woman “hit the gas, ran over the barricade” and hit the officer, who flipped onto the hood of the car and “rolled off into the gutter.”

“After she ran him down, she gunned it, and she just went screaming down Pennsylvania Avenue,” he said 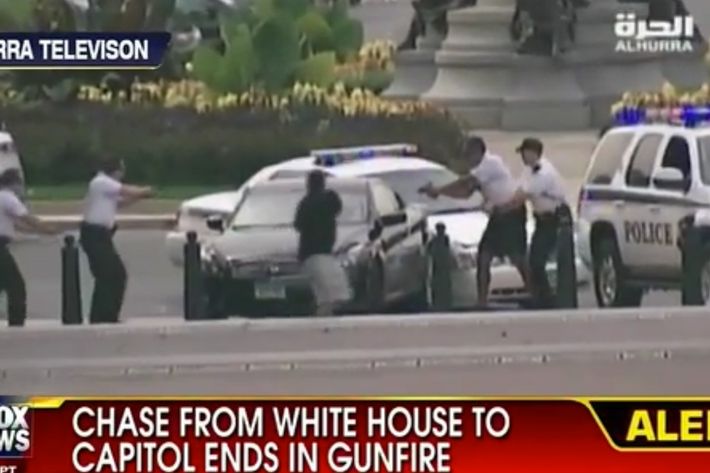 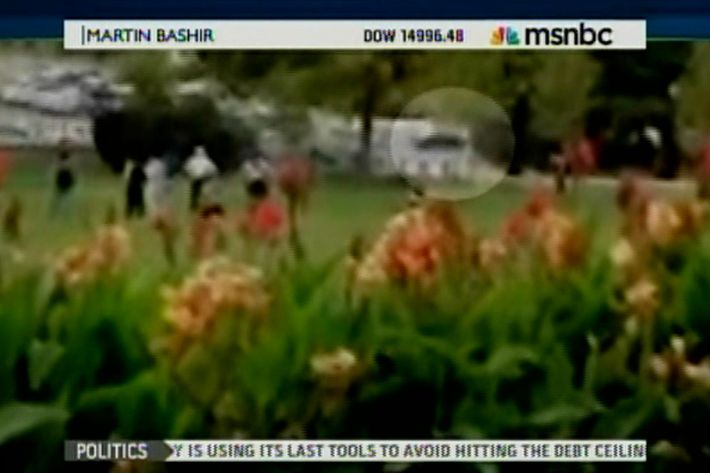 4:15 p.m.: CNN is reporting that all of the shots fired came from police. The condition of the suspect is still unknown.

3:38 p.m.: At a brief news conference, the Capitol Police confirmed that a vehicle attempted to pass a barricade at the White House and was then pursued toward the Capitol Building. No officers were shot.

Authorities said they believe the suspect is a female and that there was a child present in the car, but could not confirm the suspect’s condition. It is being described as an isolated incident.

3:23 p.m.: Various news outlets are now reporting that the suspect, a woman, was shot and killed by police. “Female driver who had rammed White House gate then drove to Cap Hill, exited her car, started shooting, then was herself shot,” according to NBC. Multiple networks have reported that a child was in the car.

At the Capital following shooting. In front of smashed police car. pic.twitter.com/zzfKxwLY7H

3:18 p.m.: We don’t yet know exactly what happened, but Republican Representative Tim Griffin wasted no time politicizing the incident. He then apologized:

@young_guac i have been saying that for days young guac.

The shooting today is a terrible and inexcusable tragedy and an act of terroism. No one but the shooter is ... http://t.co/1rscc95Tj5

2:29 p.m.: Scenes from the initial panic first surfaced on Twitter thanks to the many reporters already there covering the government shutdown:

Scene at the Capitol, via @CNN: pic.twitter.com/84r2UcOS8O

No joke on Capitol Hill as Cops are running with machine guns as reports of shots being fired at Capitol pic.twitter.com/vdjAKkLP4y

Something happening outside Capitol. Police running around with guns at ready. pic.twitter.com/7JkF5fMzfS