“Is anyone here not a reporter?” shouted a cameraman as a throng of news teams converged around the world’s first Bitcoin ATM machine, regarding it like the monolith in 2001: A Space Odyssey. In a coffee shop in downtown Vancouver, the first automated receiver and distributor of the digital currency Bitcoin went live today, creating an early-morning media swarm followed by a steady stream of Bitcoin enthusiasts eager to try out the machine.

The honor of being the world’s (and likely the universe’s) first Bitcoin ATM user went to Victoria Hansen, who under the camera lights and the beaming grin of her boyfriend used the machine at around 9 a.m. “I bought $200 worth of Bitcoin,” she told Daily Intelligencer. “It’s really simple: You scan your hand, and you get a receipt.” Her plans for the funds were more wholesome than many of the nefarious things you do with the virtual currency. “We’re thinking of going to Bestie for some bratwurst,” she said, referring to a local sausage joint. “They take Bitcoin.”

Not wanting to let Victoria and the clutch of pallid gentlemen in pro-Bitcoin T-shirts have all the fun, Intelligencer decided to test out the ATM. Guiding new users through the experience was Jackson Warren, one of the co-founders of the Bitcoiniacs, the Vancouver company that owns the machine and has plans to install four more across the country by December. After choosing whether you want to buy or sell Bitcoin, you have to register with the Robocoin machine — a process that requires placing your hand in the ATM’s scanner a total of six times. (Arguably an off-brand step for a currency that prides itself on privacy.)

Upon receiving a confirmation of registration via e-mail about ten minutes later — you don’t have to give them your e-mail, but it’s easier if you do — you can rescan your hand and proceed with the buy. Inserting $100 worth of multicolor bills into the machine, DI purchased 0.46 of a Bitcoin. Proof of purchase comes in the form of a receipt with QR code and an e-mail informing you that your Bitcoin will arrive sometime within the next hour. 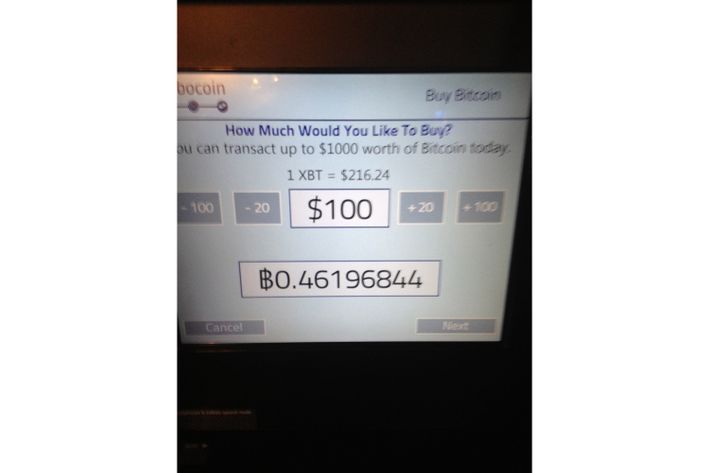 Fortuitously, the value of my fraction of a Bitcoin increased in value by about a few bucks during the hour wait, giving the distinct sense that what I’d purchased was less a currency and more, as Matt O’Brien of The Atlantic has pointed out, a fickle dotcom stock. This volatility isn’t lost on Jackson and his co-founders, but they hope that providing a better infrastructure to increase the distribution of Bitcoins will help stabilize things. “We’re going to keep making it easier” he says, “until one day there’s thousands of these things.”